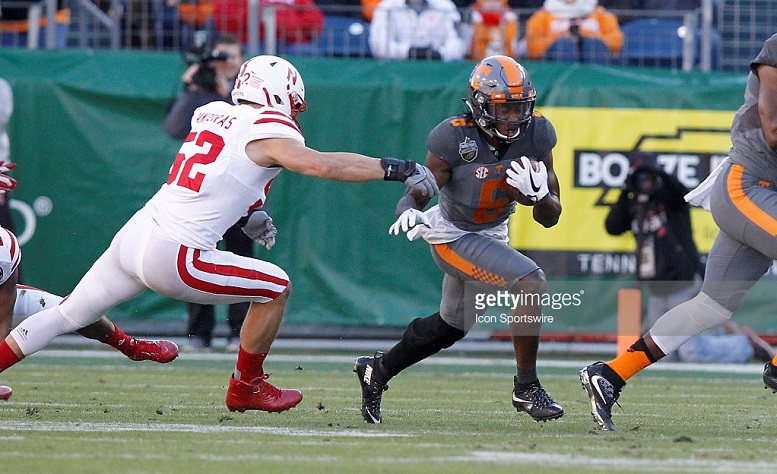 – 2016: Had 596 rushing yards on 103 rushing attempts (5.8 YPA)
– In 2 seasons with Tennessee, Kamara notched 74 receptions for 683 yards
– Originally signed with Alabama, was suspended twice by Nick Saban before asking for his release
– Played one season at Hutchison Community College, scoring 21 touchdowns before transferring to Tennessee
– Has showed great leadership since joining Tennessee

Alvin Kamara may be one of the most exciting prospects of this year’s draft to watch on tape. One of Kamara’s greatest features is his incredible burst, which Kamara is able to flash almost instantly after receiving a handoff. Due to his great burst Kamara is able to quickly accelerate through any holes in the line before a defender has a chance to wrap him up in the backfield.

Take a look at Kamara’s burst through the line here.

Facing a third and one against the Georgia defense, Kamara’s burst through the line takes him up field in a heartbeat. This play is also a great testament of Kamara’s vision which has been questioned by a few analysts.  At the snap Georgia’s defense moves to the strong side of Tennessee’s line expecting an outside run, Kamara notices this and quickly cuts up the middle. A perfection combination of vision, burst and play design gives Kamara a 13-yard gain on third and one.

While Kamara may appear lean and slender on tape, his ability to break tackles and play bigger than his size caused big troubles for opposing defenses. What truly separates the great shifty backs from the Dri Archers of the sport is the ability to create yards after contact. While Kamara may not be the kind of player to push a pile himself on third and short situations, you will not find the running back knocked off his feet by shoulder or arm tackles either.  I was amazed at watching Kamara on tape as the running back almost never goes down on initial contact.

Here is a perfect example of Kamara’s ability to create yards after initial contact.

Watch how Kamara is able to shed not one, not two, nor three but four Vanderbilt defenders to score. Kamara’s great balance and strength keep the running back upright as he gushes through the Vanderbilt defense. And if you thought the play above was impressive, here is Kamara in the same game, watch how Kamara outdoes his previous effort by breaking six tackles on the way to end zone.

Astonishing. The only word that can describe Kamara’s determination for finding the end zone on the play above. Simply said that with his great speed and balance, defenders are often forced to take desperation tackles to pursue Kamara, making Kamara one of the most dangerous open field threats of his class.

The previous play may also serve as a foreshadow to Kamara’s next great asset. Kamara is not only a nightmare for opposing defenses in the screen game but is also capable of being a legitimate threat while lining up wide as a receiver.

Kamara is a fluid route runner and has great hands for a running back. Having a linebacker or safety line up wide across from Kamara is a huge mismatch swaying in the offense’s favor. Watch Kamara below as the running back runs a smooth and crisp route across the field before turning up field to do what he does best.

Kamara’s sharp cut leaves the defensive back tasked with guarding him flat footed for a fraction of a second, enough to give Kamara enough time to gain separation. Score this one as another big play for Kamara and another occasion in which the back breaks more than one tackle before being brought to the ground.

Kamara can effectively run and catch the football but now the sole question remains, can the 215-pound back pass block? Running through his tape, Kamara definitely did not shy away from pass protection and helped chip in on more than a few occasions. On the tapes available, I did not notice Kamara in the situation where he had to anchor against an incoming pass rusher coming at full speed. The closest I got to that situation was this clip below, where Kamara seems to hold his own against a Virginia Tech defensive lineman.

While Kamara did stand his ground against the defensive lineman in the play above, the lineman was already picked up by a previous blocker before hitting Kamara. This would severely impact the lineman’s power and rush. Working with the film available, Kamara looked confident and ready to pass protect when called upon.

Another small concern with Kamara is his durability and workload capacity. Kamara failed to ever attempt over 20 rushing attempts in a game at Tennessee, as the back was splitting carries with Jalen Hurd up until Hurd’s departure from Tennessee this October. In addition to this, Kamara also suffered two knee injuries last season, raising questions about if the running back can handle being a primary ball carrier in the NFL.

In the end, the pros outweigh the cons when it comes to Tennessee’s Alvin Kamara. The running back possesses great burst, elusiveness, and speed while complimented by great pass catching abilities. The franchise that selects Kamara on Draft Day will be adding a highly talented player to their roster. While I am on the fence about Kamara’s stock as I can definitely envision him climbing into the first round, I am leaning more towards an early day two selection.

Games Watched: Vs Virginia Tech, at Vanderbilt, vs Alabama, vs Georgia, vs Bowling Green