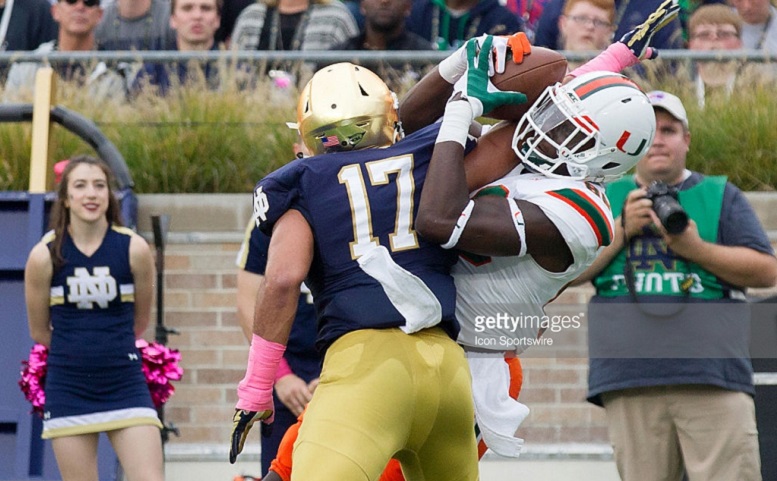 – Will slip off blocks at times and especially when down-blocking inside
– Not a refined route runner and rounds off at top at times with some wasted movement
– Catching technique needs work and doesn’t always pluck the football out of the air or high-point when he should
– Needs to cut down double-catching and watch football into hands before turning up field better
– Could stand to add some core strength and especially in legs, and fill out frame a little
– Two-year starter
– Roughly a 55% catch rate on total targets

Njoku’s athleticism can be seen in every game that I watched as well as his ability to occasionally make some great catches. A great example of this is below on his touchdown against Notre Dame. Njoku runs a pivot route and despite getting held, was able to get his body turned around and in control on his way to making a nice combative catch.

Njoku’s savviness for details at times along with his athleticism can both be seen on this play below against Pittsburgh. First, he does a great job of setting up the screen by giving up the inside and then chasing before releasing out into the flat. After catching the football and securing it away from the inside of the field, Njoku’s athleticism takes over on his way into the end zone.

Njoku is accomplished when it comes to working the seam of the field vertically. In the play below against Pittsburgh, Njoku stresses the outside cornerback against what looks to cover-3 by stemming his route outside a tad before breaking to the post. While you’d probably not like to see him leap unnecessarily for the football, he quickly secures it nonetheless before taking multiple immediate hits. He still manages to get some extra YAC despite those hits.

While Njoku is not an overpowering run blocker at this stage of his career, he does have some tools to work with as you can see in the run play below against Pittsburgh. He uses his hands and hips well to turn his man away from the middle of the field. There are times, however, when he does come off the line too upright but with his knee flexibility should be able to be coached out of that bad habit

As previously mentioned, David Njoku will occasional get beat inside and below is an example of that.

Overall, there’s not a lot not to like about Njoku as a tight end prospect. While still raw in several areas of his game, he has all the tools needed to become a great hybrid tight end in the NFL. He can already function in-line with a level of dependability and that area of his game should improve at the next level with coaching and work in the weight room.

Njoku played defense while in high school and his grittiness shows on tape as a tight end. I’ve watched a few of his interviews from this past season and he comes off as an intelligent young man willing to do anything to help his team win.

Njoku is one of the several players in this year’s draft class that will be spotlighted during the upcoming NFL combine. He should run the 40 in around 4.55 seconds and maybe even faster. He should also do very well in the short shuttle and 3-cone drills.

Even though I’ve only started to scratch the surface on the tight ends in this year’s draft class, what I’ve watched of Njoku makes me believe he’s one of, if not the top one.

Should Njoku somehow manage to drop to the Steelers with the 30rth overall selection in the first round, he’d be incredibly hard to pass up.