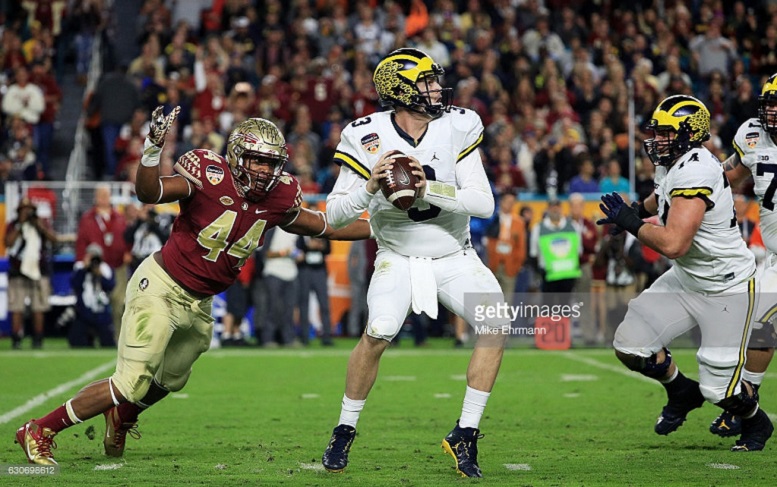 – 2016: 68 tackles, 21.5 TFL, 16 Sacks
– Walker’s 16 sacks were second most in FBS (Division I)
– Second Team All American by AP last season
– Has 26.5 sacks in his last two seasons at Florida State
– Originally committed to Alabama but later chose Florida State

In the sack below, Walker is lined up as a 5-technique end and uses his powerful arms to swim inside, beating the Ole Miss left tackle and giving himself a clear path to the quarterback.

Walker’s powerful, long arms give him the tools to be a great pass rusher at the next level. With the tools to succeed at hand, Walker also shows a great understanding of how to use his strength, and arms to succeed. In the play above, watch how Walker’s swim move across the left tackle is very fluid, looking perfectly synchronized.

Walker was not done manhandling Ole Miss offensive lineman though, as this next sack, that is posted below is perhaps his most impressive.

Matched up against the Ole Miss right guard Jordan Sims, Walker bullies his way to another sack. At first glance, how Walker was able to use his left arm to shove and disengage from the 323 pound Sims may be the talking point from the play but that would be like skipping ahead to the end of a fight to just see the knockout blow. By doing that, you miss the events that led to that victorious moment, which in this case is Walker’s sack. Walker’s powerful shove was only used after his initial inside pass rush move was negated by Sims, making Walker’s shove a counter move. Teams watching Walker will love this counter move because the ability to create a play when your first attempt is unsuccessful is a must for NFL pass rushers.

Despite 4.5 sacks, Walker’s Ole Miss game tape is not perfect and reflects some of his greatest weaknesses. Walker struggles to hold his own in run defense and shed blockers. Watch how Walker is easily handled by Ole Miss tight end Evan Engram on the play below.

Walker is so easily handled off the line that it almost appears that the play is occurring on ice. Even worse, is that Walker is being pushed off the line not by a 300-pound offensive lineman but by 227-pound tight end Evan Engram. Walker has more than a 50-pound advantage over Engram, there is no reason he should be getting shoved four yards off the line. Call it an inconsistent motor or a weakness in his run defense, Walker’s stock will drop because of it.

Walker’s lack of motor or effort shines through here again against Louisville.

As Louisville quarterback Lamar Jackson begins to run to the sideline to head up field, Walker follows in pursuit – just not for long. Just as Jackson crosses the 12-yard line, Walker goes from a sprint to a light jog. Not something any team wants to see as the opposing quarterback showboats his way to the end zone.

But for all of Walker’s weak traits, the Florida State defensive lineman still has a few more redeeming ones left in store. At 280 pounds, Walker’s strength cannot be questioned but due to his inconsistency it is called into question. Putting that aside, Walker’s strength and bull rush are a sight to see when used with maximum effort.  Look at Walker’s drive on the play below as he notches a sack against Florida in the fourth quarter.

Walker uses his arms, legs and size to get through two offensive linemen and a running back on his way to the quarterback. Walker beats the first lineman with his arms, then uses his lower body power to drive through a second offensive lineman and running back. The tools are there for Walker, it just may be a matter of finding the right coach who can get it all out of him for sixty minutes.

Walker’s versatility on the defensive line man will also be a unique aspect for the team that drafts him. If you noticed on the plays above, Walker was featured both on the left and right side of the line, either as a 5 technique or 3 technique end. Walker also has experience lining up right over the football as well, though I do not figure this will be role he sees often at the next level. With his size, Walker does not seem likely to become a 3-4 outside linebacker unless he drops weight. I project Walker becoming a 3 technique end in the NFL, as his pass rushing move set and size seems better suited in that role.

Games Watched: vs Clemson, vs Ole Miss, vs Louisville, vs Florida