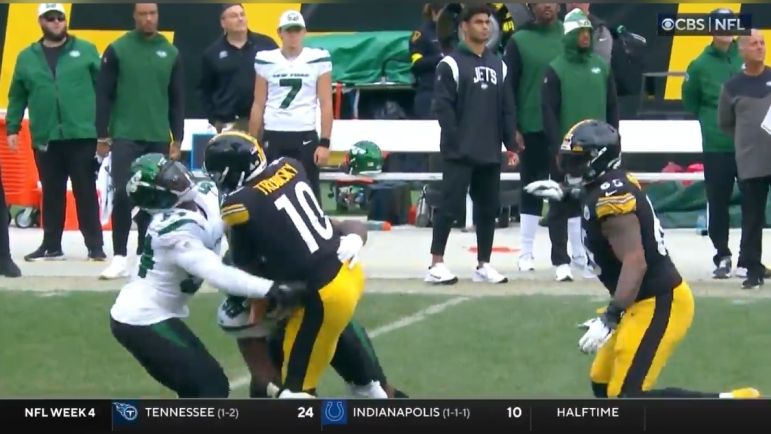 New York Jets’ linebacker Carl Lawson has been fined $15,914 for his roughing the passer penalty on QB Mitch Trubisky at the end of the first half in New York’s Week 4 win over the Pittsburgh Steelers. CBS’ Jonathan Jones announced the news a short time ago.

Jets Carl Lawson was fined $15,914 for his roughing the passer penalty at the end of the first half last week vs. Steelers.

You can check out the hit here, Lawson burying Trubisky into the ground on a Hail Mary attempt.

It negated the interception and kept the first half alive, allowing Chris Boswell to nail a 59-yard field goal, a record at Heinz Field/Acrisure Stadium, to close out the second quarter. It was the last play of Trubisky as a starter, benched at halftime in favor of Kenny Pickett, who will make his first start Sunday against the Buffalo Bills.

All NFL fine money goes to charity. Fine amounts are agreed to in the CBA and got up by a certain percentage every year, leading to odd numbers like Lawson’s fine.

As of this writing, no Steeler has been fined this season.