– Incredible, Combine record setting straight line speed (4.22 40)
– Quick-twitch player and a strong route runner, ability to drop his hips on underneath routes and bursts away at the top of his route to create space
– Shows potential to have an elite release off the line, nuanced route runner who sells initial stem with whole body, rare eye manipulation and stresses CB’s discipline and technique
– Great short-area quickness, fast feet and change of direction ability
– Quick to the tuck after the catch, YAC threat with elusiveness and straight line speed, will wreck DB’s angles in space
– Will be able to create yardage in the quick game (screens, slants, swings)
– Tougher to bring down than you’d expect, has surprising contact balance and difficult for defenders to line up and get a good shot/tackle on
– Shows some versatility on offense, has slot experience in 3×1 sets and use as a gadget player on sweeps/swings out of the backfield
– Gives surprisingly good effort as a blocker, team player and has a chip on his shoulder
– Experience running most of the route tree
– Kick return experience/value
– High level of production in final season, one of the most dominant players in college football

– Thin frame who will have predictable questions about size, below average hand size (8 3/4)
– Can get beat up in press coverage due to size and functional strength
– Perhaps too much wasted motion off the line, needs to be more decisive and gain ground quicker than running his feet to break the corner’s jock
– Didn’t see much evidence of hand use to beat press, preferred to win with feet and shoulder dips
– Occasional dropped pass
– Effort is there but will have trouble stalk blocking bigger cornerbacks
– History of knee injuries and medical is extremely important

If you even have remote interest in the Combine, or have a Twitter account, or are a fan of private islands, you’re well aware of who John Ross is. He turned in the Combine’s fastest 40 ever, a 4.22, this past weekend. It’s a surprise to see anyone break the record just for how lofty the goal was but Ross’ speed was never in question.

But honestly, I don’t even think it’s his most impressive trait. Which is a crazy thing to say because the speed, objectively, is the best the league has seen. His ability to separate and win off the line, when it all comes together for me, is amazing. It’s hard to even describe what he does to corners. Here’s maybe the best example against USC, a play you may have already seen.

This wasn’t against some wide-eyed freshmen either. That corner was Adoree Jackson, a second round pick in this year’s draft. It’s hard to find a play of more dominance at the position than that.

And that’s not the only time he does that to corners. Wasn’t a one-off thing. He is a quick-twitch route runner who sells the stem of his route off the line with his whole body. Shake to the inside on this fade route, creating space on the corner, and finishing the play.

It’s how small receivers get to play big on the goal line.

We talk about eye manipulation for quarterbacks, moving safeties with their vision, but the same applies for receivers too. Watch him look inside like he’s going to run a slant before breaking outside, snapping his head, and creating space. 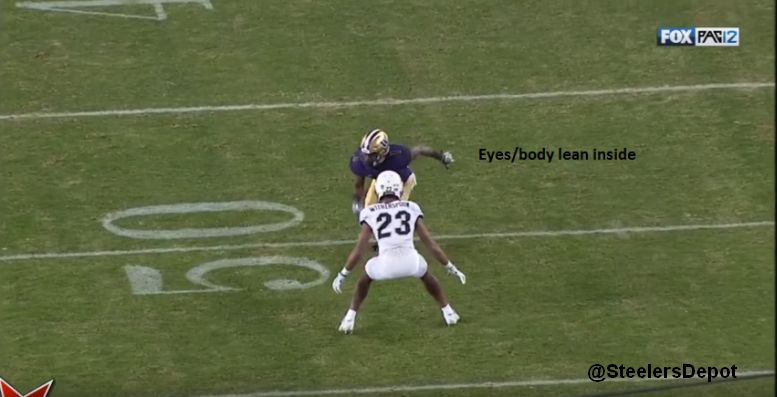 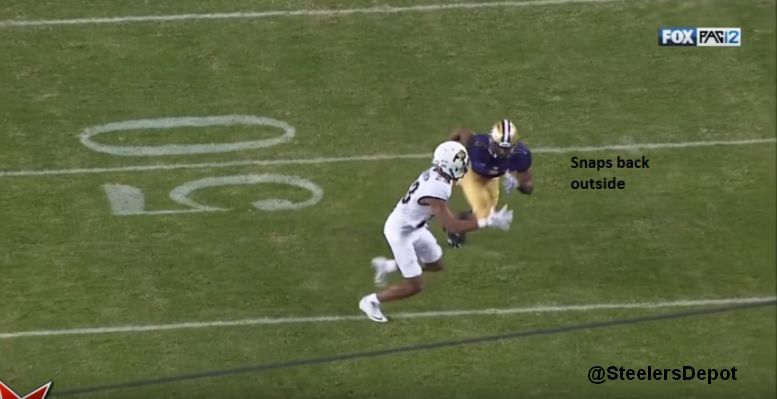 Despite being a small, thinly built guy, he’s elusive and difficult to bring down. Someone who can win vertically but also in the quick game, getting him in space and allowing him to weave through traffic and bounce off defenders.

It shouldn’t be any surprise that a thinly built guy like him can struggle against press. When it all comes together, it looks good, but corners can get into the framework of his body and knock him off balance. That’s what we see here at the top of your screen.

I don’t have any examples here but Ross can get too cute trying to win off the line, pumping his feet but not going anywhere. Want him to make his move quicker as to not throw off the timing of the route. It’s fixable and relatively minor but something a receivers coach will work with him in. And why wouldn’t he? Ross is one of the most explosive players in this draft.

He’d be a great fit in Pittsburgh. I’d put him in the slot against typically smaller corners who won’t beat him up and get him stacked and off ball to give him space. With him, AB, Bell, and hopefully Bryant, it’d be the best offense in the league. My personal Fast Times at Ridgemont High Linda Barrett fantasy. Too bad that 40 time is definitely going to take him off the board before 30 and even before he ran it, those odds looked pretty unlikely.

Ross is almost certain to wind up as my #1 receiver, definitely ahead of Mike Williams and probably ahead of Corey Davis.

Games Watched: at Oregon, vs USC, vs Colorado, vs Alabama