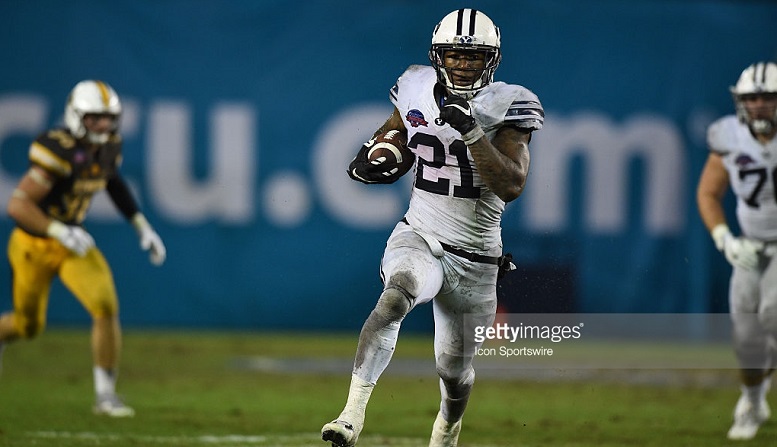 At first glance, you can not help but notice Jamaal William’s size. Standing at 6’2 and around 215-pounds, Williams has the picture-perfect frame to be a running back in the NFL. Williams’ frame is not the sole reason why I believe he can be a successful all-purpose running back but it is how the BYU running back uses his size to his advantage that caught my eye.

Williams is a stout running back who uses his size to overpower defenders who dare to bring him down. Having great patience and vision, Williams routinely makes it past the line of scrimmage and it is here where the BYU running back is most dangerous. Weighing around 215 pounds, Williams is tough work for linebackers and defensive backs at the second level.

Here is a play from BYU’s game against Michigan State that stood out as a great example of Williams’ power.

On this play Williams breaks three tackles before being carried out of bounds by two more Michigan State defenders. That totals five defenders or almost half the defense to just bring Williams out of bounds. Williams’ ability to fight through contact and keep his legs moving reminds me of the now retired Marshawn Lynch.

Like Lynch, who was also 215 pounds, Williams is also highly elusive for his size. Single handily responsible for BYU’s offense at times, Williams’ has the potential to beat you with his power or his elusiveness. Watch below as Williams uses all of his skillset to provide a huge gain against Arizona.

Williams beats three defenders once again, two with his power and one with a great juke move to get into a foot race up the sideline. This play could be the defining run of Williams’ college game tape for more reasons than just his impressive ability to turn nothing into something.

As soon as Williams knows he will running up the left sideline, he immediately switches the ball over to his left arm. Perhaps not a feature that will propel Williams to first round discussion but a smart decision that is often forgotten in today’s game.

Smart is a word that I find myself using often while watching William’s game tapes. The record setting 286-yard performance against Toledo speaks volumes about Williams’ decision making. Excellent vision, power and quickness make Williams the great one-cut running back that is seen on tape.

Though a backside defender stands in Williams’ path to the open field, the BYU back is too quick to be stopped. Cutting away from the strong side of the line, Williams sees a hole and accelerates through it. The result is a touchdown – one of five that Williams scored that day.

Speaking of touchdowns, here is another of Williams’ cut back runs on his way to the end zone. This one occurs near the goal line against West Virginia.

BYU is in 21 personnel here with a full back and tight end assigned to block the right side of the line. When Williams receives the handoff, there is already two defenders surrounding him in the backfield. Williams then proceeds to cut back to the weak side, scoring a touchdown and completely freezing the backside defender in the process.

Williams was asked to pass protect more than receive last season and the results were a mixed bag. Williams has a good foundation for anchoring, he bends and extends his arms under the blitzer’s chest.

Williams does a good job of picking up Michigan State’s Chris Frey on the blitz, getting under his pad level and then shoving him outside the pocket. Where Williams scores a negative on his pass blocking is in his tendency to lunge at incoming blitzers, resulting in multiple missed blocks.

The only forces riding against Williams’ draft stock is the running back’s injury concerns after ankle and knee injuries in his last two seasons in which he played. If Williams can stay on the field, the BYU product could become a workhorse back at the next level. With a electrifying combination of strength, elusiveness and vision, Williams could be a great value pick towards the end of day two.

Games Watched: vs Toledo, vs Michigan State, vs Arizona, vs West Virginia, vs Mississippi State