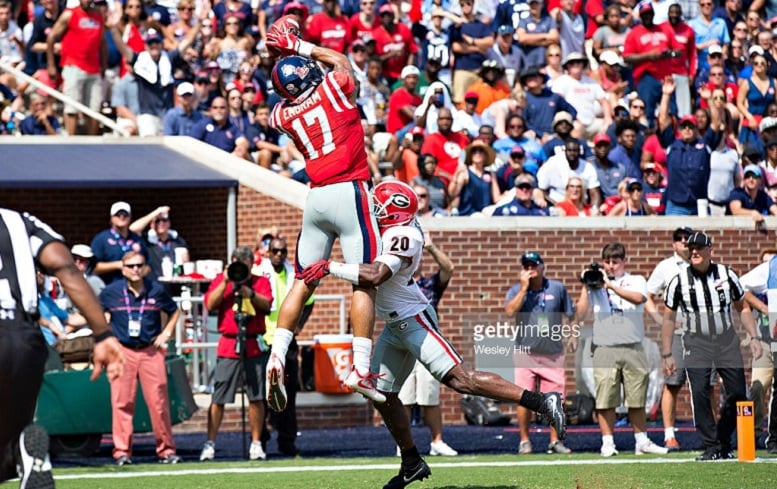 – Above-average athlete for his size
– Mismatch for linebackers and safeties
– Effective vertically down the seam
– Consistent YAC producer
– Solid production senior year with 68.42% catch rate and 16 explosive plays
– Experienced at playing detached from line as a flex and slot receiving option

Let’s look at Engram’s athleticism first and his ability to make a combative catch in a big moment. on the red zone play below against Georgia, Engram easily separates from safety Quincy Mauger on a corner route and then proceeds to adjust his body in order to leap and high-point the football in the end zone for a touchdown. You can see a good picture of this catch above.

While a lot of Engram’s tape shows he catching several flair-out passes out of the h-back position, he is also effective at turning up field on wheel routes. Here’s an example of that in the game against Florida State. He calmly catches the football at about eye-level and then braces himself for a big hit just short of the end-zone. If thers one thing that I noticed about Engram while watching his tape is that he’s not afraid of contact after making the catch and can often times be seen initiating hits along the sideline.

If NFL defenses plan on playing two-deep safeties against an offense that features Engram in the slot they better make sure to cover the tight end with a player who can turn and run with him in the middle of the field. As you can see on the play below against Florida State, Engram easily runs past linebacker Matthew Thomas to the post for a score.

While Engram appears to be a willing blocker, he’s not consistently good at it and his technique stands to need quite a bit of improvement in that area of his game. Engram prefers to lead with his shoulder and head quite a bit as you can see in both of these plays against Florida State. While he effectively gets away with his poor technique on the first play below, he isn’t so lucky in the second one. While both of these plays came from the game against Florida State, you’ll see it is a common theme with Engram throughout all of the games from last season that you watch.

While Engram is far from being a complete player, he’s more than likely going to wind up being one of the top five tight ends drafted this year. He’s a classic flex tight end prospect that can be lined up virtually anywhere on offense. With the right route combinations, Engram can easily find himself open in both the flat and in the middle of the field if covered by a safety or an inside linebacker. He’s essentially a big wide receiver and it will be interesting to see the kind of numbers he puts up in Indianapolis at the NFL combine.

It would be nice to have some all-22 views from Engram’s games as I don’t really see him running a wide variety of routes in the games that I watched. He also could stand to do a better job of selling the routes that he does run but that’s not uncommon with pass catchers come out of college. You also don’t see him pressed at the line when flexed out.

While I didn’t show any clips of his drops, Engram has had his share of them. I don’t consider him having bad hands, however, as I chalked a few of them up to bad technique and him not watching the football all the way into his hands before turning up field.

Engram isn’t likely to be used a lot as an in-line blocker in the NFL, at least not initially, as he’s just not a reliable blocker coming out of college. In the right offense, however, he should be able to register his share of catches and especially as a rookie. I don’t, however, view Engram as a player who will offer his new NFL team much in the way of special teams play for whatever that’s worth.

I foresee Engram being drafted somewhere during the second day of the 2017 NFL Draft and more than likely in Round 3. I believe his ceiling depends a lot on how he develops not only as a blocker, but as a route runner as well.

Games Watched: at Florida State, vs Georgia, vs Auburn, at Texas A&M