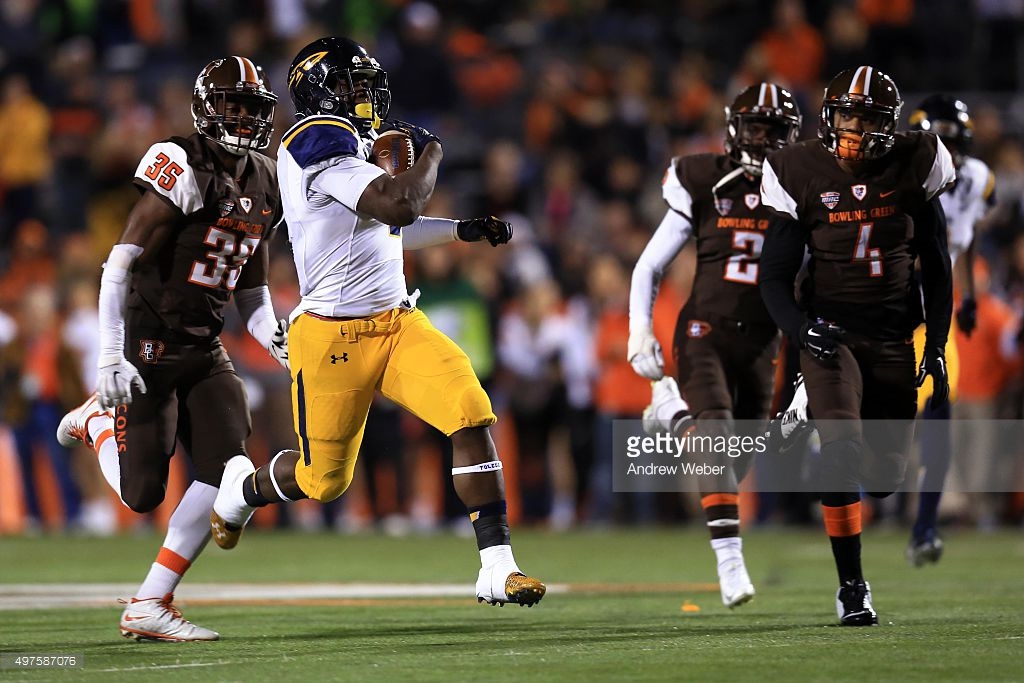 – NFL size/frame, will be able to withstand the rigors of the NFL
– Near elite contact balance, finishes every run, and carves out every yard after contact???
– Well-rounded back who combines strong acceleration with power
– Dangerous in space, able to make people miss, changes direction with decisiveness and explosiveness
– All-situations runner, potential to be a workhorse back
– Showed growth and an increased role as a receiver in 2016
– Has effort and heart as a pass protector, though technique will need cleaned up
– Tons of production in his career, lots of starting experience
– Durable, no major injuries in career

– Lacks breakaway top-end speed to run away from everyone at the NFL level, appears to have dropped weight to increase burst/speed
– Needs to show more patience as a runner in gap schemes, following blocks and not getting ahead of the initial puller
– Gives effort in pass pro but drops head/eye level, causing him to whiff and be unable to stick on blocks
– Vision needs work, has to trust what he’s seeing, needs to get upfield quicker
– Minor ball carrying problems, not consistently holding the football in the off hand

It’s a draft full of household names at running back. Leonard Fournette, Dalvin Cook, Christian McCaffery, all names that popped up on Sportscenter’s highlights each week. Kareem Hunt doesn’t fall in the category but his production and NFL prospects are nearly just as bright.

One of his best traits is his contact balance. Ability to run through tackler,s stay on his feet, even when he’s knocked off balance. Check out this run at the Senior Bowl. Nose tackle blows up this zone run but Hunt spins off, stays on his feet, slips through the tackle of the backside linebacker, and nearly finds the end zone.

But Hunt can win in space for a big man and that’s equally as impressive. He’s not *just* a power or elusive runner. He can win with both. As written in the report, he had a significantly more active role as a receiver this season. And it allowed him to make plays in space like this one, breaking the ankles of the DB.

On this Senior Bowl run, he puts it all together. Hits the hole with burst, outruns the safety’s pursuit angle, and racks up a massive run before being chased down by linebacker Tyus Bowser (rightfully questioning the long speed, Hunt will turn in an average 40 time at Indy).

But he isn’t without his faults. He will outrun his blocks in gap schemes and he has to work on some of his footwork as a zone runner. He has good vision overall and knows where to go but he can be impatient in trying to get there.

On this gap run, he’s out ahead of both pullers and winds up getting only a couple yards. Definitely needs to be more patient.

In Mobile, up watching the All-22 film, he tries to bend an inside zone run back, making the correct decision, but he spun away instead of planting and turning upfield. It cost him yards.

On this play, he’s not switching the ball into the correct hand, the away hand, to lower the risk of losing a fumble and using his near hand to keep defenders at bay. 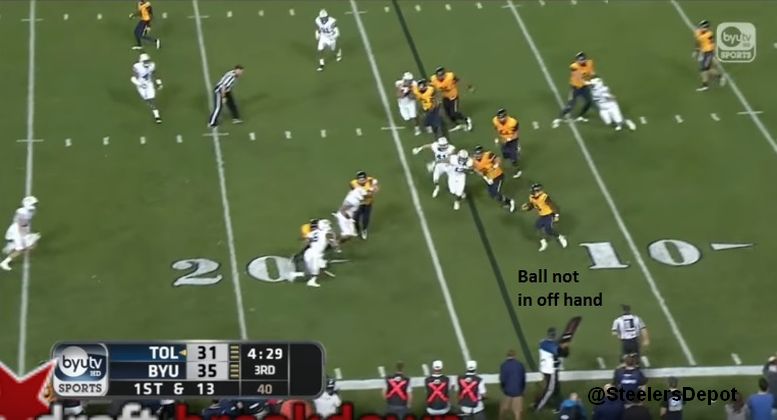 Pass protection is an area Hunt gives a lot of effort but also needs some technique work. Too many times he’s dropping his eye level on contact, being unable to see what he’s hitting and falling off too easily. 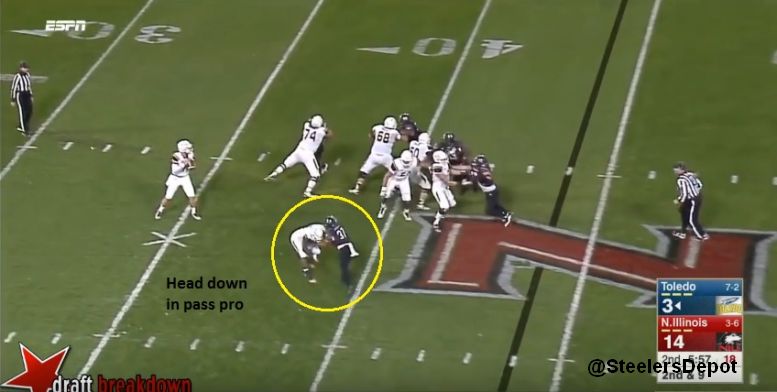 Like I wrote at the top, Hunt presents really good value in this draft because the talent at the top is going to push him down. Arguably a second round talent that a team will pick up in the mid-to-late third. A third round investment is a bit heavy for a team who never wants to take Le’Veon Bell off the field but it would hard to be upset the selection.