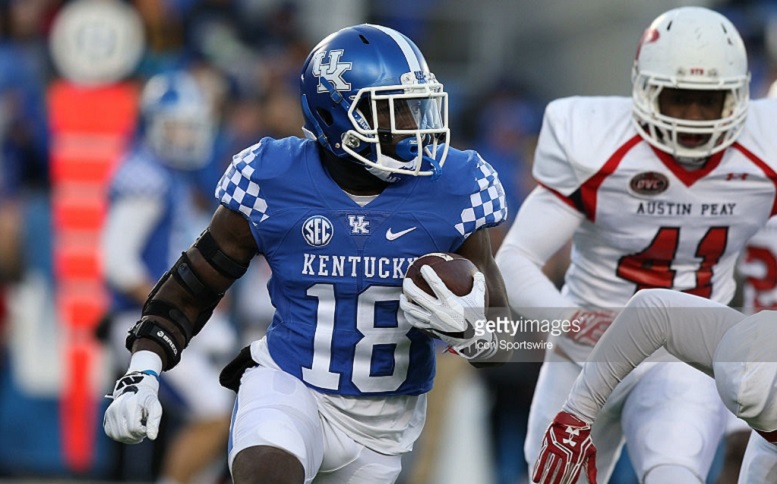 Stanley Williams brings a contrasting combination of style and size to his overall game. Williams is listed as 5’9 and 196-pounds, but does not rely on speed and athleticism like other backs his size. Nicknamed “Boom”, not for his ability to steam roll defenders but for his ability to unleash an explosive play at any moment, Williams crafts his game mainly on his vision and patience.

Williams will not accelerate right to the line, instead the running back waits for his blocks to develop and then makes his way through the hole. Watch below as Williams pauses for a split second and then squeezes through an opening up the middle.

Williams’ style has a great track record to back it up, the Kentucky running back averaged over 6.5 yards per carry in each of his three seasons. Averaging over 6 yards per carry is no easy task for a full time running back but Williams was able to carry that number on the back of his many explosive runs.

Another successful read and accelerate run by Williams nets the running back about 25 yards here. Partial credit is due to the Kentucky offensive line, as the clean pocket provided by the linemen gives Williams the time to be quarterback-like with his decision making.

Besides his vision, Williams also has a great amount of speed to work with. Not only is Williams a threat up the field but the running back is also capable of beating defenders to the perimeter. It is near the perimeter where Williams can turn plays from good to game-changing.

It was hard to narrow down a few plays from William’s game tape against New Mexico State to include in this profile because the tape is filled with various highlight worthy clips. The one I choose above was a great example of William’s speed and playmaking features. A play that should end with Williams tackled by the linebacker he is met with in the hole turns into a long touchdown run up the sideline. Even more astonishing is the fact that the New Mexico State defense is clued into the run because Kentucky’s starting quarterback exited due to injury.

Though Williams uses a patient style not common for his size, the running back carries one complaint that haunts many small college backs – pass protection. Williams does not anchor well and is blown backwards more than you would like to see.

Here is another play from Williams’ game tape against the Florida Gators except this one is for all the wrong reasons. Tasked with the duty of blocking Jabari Zuniga (#92), Williams is driven backwards as though he is a practice drill for the Florida defensive lineman. Zuniga is only listed as 245-pounds on the Florida Gators website, a size that you would expect an NFL caliber running back able to handle.

Pass protection is a big issue for college running backs but does not pose as a deal breaker to Williams’ late round draft stock. Besides a few coachable traits, the most crucial requirement for Williams to be successful may be running behind offensive line that suits his style. With a dominant and athletic line in front of him, Williams can be afforded the time to see blocks develop and make the most of his abilities.

Williams may never be a week to week starter in the NFL but the running back could develop into a decent supporting act. If the Steelers look to get younger at the backup running back position, Williams could be a good fit for their roster. With an athletic offensive line, Williams could feel right at home running behind the Steelers’ linemen. Look for the Kentucky running back to hear his name called sometime during the sixth round.

Games Watched: at Florida, at Alabama, vs New Mexico State, vs Southern Miss