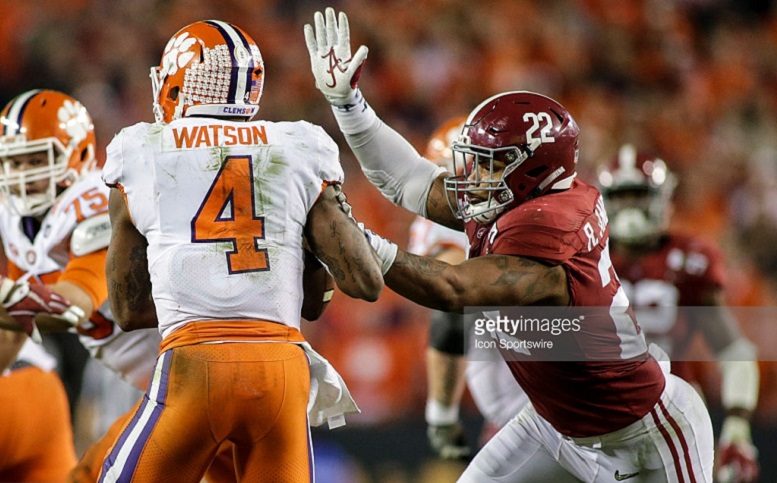 – Not as athletically gifted as team mate EDGE defender Tim Williams
– Lacks a counter move
– Short arms for EDGE, only 31 3’4 inches
– A bit too slow to match up in coverage with tight ends

– 2016: 61 Tackles, 19 TFL, 9 Sacks, 4 Forced Fumbles & 1 INT
– SEC Defensive Player of the Week for Performance against LSU
– Had a pick-six vs Washington in Peach Bowl Playoff Semi-final
– Semi-finalist for Butkus Award which is given to Nation’s top linebacker
– 30.5 tackles for a loss and 15 sacks in last two seasons

Nick Saban was fortunate enough to feature two top tier edge defenders on his defense this season. After previously profiling Alabama’s Tim Williams, my focus has now turned to the opposite side of their defense with edge rusher Ryan Anderson.

Both Williams and Anderson have a knack for getting to the quarterback but only one of the two is receiving first round discussion. With a variety of moves in his arsenal, Anderson could be a sleeper pick in this year’s draft.

Anderson’s biggest strength is his ability to use his upper body, with quick and powerful hands, Anderson can find his way around opposing tackles. What NFL executives will like to see is how Anderson uses his forceful hands to rip around and under opposing tackles on route to the quarterback.

Here is Anderson matched up against USC tackle Chuma Edoga, though this matchup is a long way from being a heavyweight clash of pass rusher versus left tackle. Anderson makes quick work of Edoga by using his hands to get under the tackle’s shoulders leaving only the USC quarterback in Anderson’s sights.

What makes Anderson’s hand technique extremely effective is the support of his greatest raw gift – speed. Anderson’s speed off the edge is good enough to stand on its own but when on the same page with his hand technique, you can almost bet on a sack. Anderson can use his speed in a variety of ways, either right around an offensive tackle or opening the tackle wide before cutting back inside.

As you may notice, Anderson was not done abusing the USC offensive line yet, this time coming from the opposite side against USC right tackle Zach Banner. Anderson drives Banner back, opening the tackle’s hips in the process and then disengages right into the USC quarterback for a sack. It is relevant to note that Banner is no slouch either, coming into last season Banner was voted USC’s 2015 lineman of the year.

Now for exhibit B, watch how fluid Anderson’s path to the quarterback becomes when the pass rusher times up his outermost step and hand movement.

Anderson times his burst with his hands and is able to skip past the Arkansas offensive tackle, an impressive feat that falls just short of a sack. Though you would like to see Anderson have a more direct path to the quarterback, rather than the rounded one seen above, it is a rather minor issue for a player of Anderson’s caliber.

Where Anderson lacks in athleticism, he makes up for in grit and physicality. Anderson is a blue-collar player who is strong at the point of attack. Anderson’s 19 tackles for a loss speak volumes of his contribution in the trenches. As a potential outside linebacker, Anderson will be asked to not only be physical but also to set the edge in the running game, a task in which the Alabama defender has done adequately under Nick Saban.

In what figures to be the only aspect affected negatively by Anderson’s lack of raw athleticism is the edge rusher’s coverage skills. Depending on the scheme Anderson is drafted into to, he may be asked to drop into coverage on occasion. This could present a problem as Anderson seems to be too stiff to change direction when dropping back. What could make this issue more tolerable for Anderson’s case is if he continues to make plays like the one below.

In honesty, Anderson’s pick six was likely more of a result of a great blitz call rather than ability. As Anderson baits the tackle into thinking he is coming, a free rusher shoots straight towards the quarterback leading to an errant throw that Anderson returns for a touchdown. With that said, Anderson’s playmaking will only help his build his case as we get closer to draft day.

Not only does Anderson do what you would like to see out of an edge defender, he also does it well. The Alabama edge prospect could be a great consolation prize for a team unable to grab an edge rusher in the first round. The Steelers are in the market for an edge rusher but I believe by the time their second-round selection rolls around, Anderson will be already taken.

Games Watched: vs Arkansas, vs Washington, vs USC, vs Michigan State, vs Tennessee