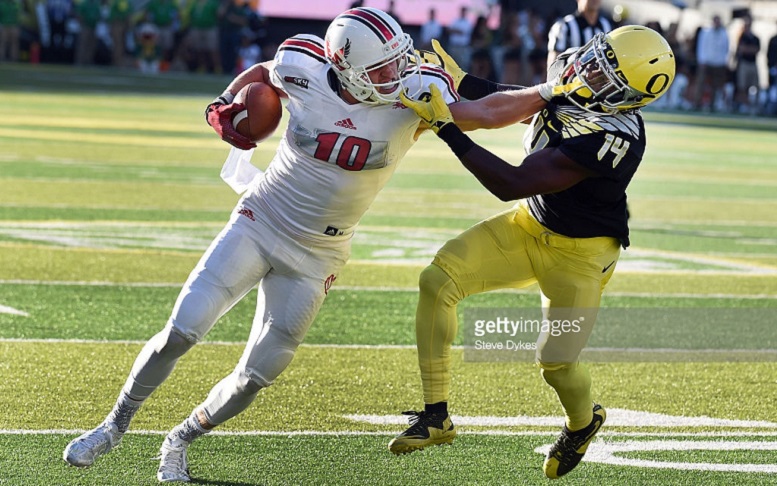 Cooper Kupp was the college equivalent of Jerry Rice. He holds NCAA records (for both the FBS and FCS) in career receptions, career receiving yards, and career receiving touchdowns. However, his insane statistical production is not the only comparison that can be drawn to Rice. Like Rice, Kupp’s success was not merely the result of superior athletic ability or blazing speed, but instead was also a product of his great football awareness and overall mastery of the nuances of the receiver position.

In this first clip, Kupp uses his precise route-running to beat Oregon’s bracket coverage. Several subtle movements allow this play to be successful. First, Kupp avoids being rerouted by the linebacker by taking an outside release.  He then quickly gets back on top of his route, squares his head/body up-field, and pushes hard to the inside hip of the inside bracket-defender. His stem is so effective that it both freezes the inside-defender AND causes the outside-defender to anticipate an in-breaking route and turn his hips inside.  Kupp takes advantage of these defensive missteps by exploding out of his break, snapping his head back to the quarterback, and working back towards the line of scrimmage. He calmly reacts to the low throw and slides for the reception.  On paper, Oregon should have Kupp’s Out-Route completely locked-down; however, his sound fundamentals allow him to get open and make the catch anyway:

The next play illustrates Kupp’s great field awareness. Here he is running a Slant against Oregon’s Cover 2-Man defense. He runs his pattern on a flat angle, which puts extra stress on the corner and causes him to run hard upfield to make the tackle. Kupp feels the over-pursuit and, while the ball is still in the air and before he has secured the catch, begins positioning his body to pivot back to the outside. Once he completes the reception, Kupp demonstrates his strength by bullying the corner with a vicious stiff-arm all the way to the end zone. His instinctual feel for the game is something that will greatly benefit him at the next level:

Next, Kupp is running a Seam against Washington State’s Cover 2 scheme. He gets a free release, finds the soft spot in the middle of the field behind the linebackers and in front of the safety, and then climbs the ladder to make a critical 3rd down catch in the 4th Notice how, in mid-air, he checks over his shoulder to locate the looming safety, while simultaneously tucking the ball away before he falls to the ground. Great courage while making the reception over the middle and good understanding of the defense’s weak points:

Lastly, this goal line touchdown demonstrates Kupp’s nuanced route-running, as well as his elite catching ability. On the snap, he slow plays his pattern and patiently eats up the corner’s cushion; giving his quarterback the necessary time to get the ball out. Additionally, he saves space on the sideline, which gives his QB the required room to make throw to the back of the end zone. Kupp makes this contested one-handed reception look routine:

Overall, Kupp has the natural ability, technical skills, and the instinctual awareness to be a productive receiver in the NFL. Although he played in the FCS and was not consistently challenged by professional caliber talent, he nevertheless preformed as prolifically as possible in the situations he faced. For example, several of his most productive collegiate games were against FBS teams: at Oregon-245 yards 3 TDs, at Washington State-206 yards 3 TDs, at Washington-145 yards 3 TDs, and at Oregon State-119 yards 2 TDs. He may experience some growing pains as he adapts to the aggressive play in the NFL; however, he certainly has the ability to be contribute as a rookie, especially if he lands on a team with a quality quarterback.