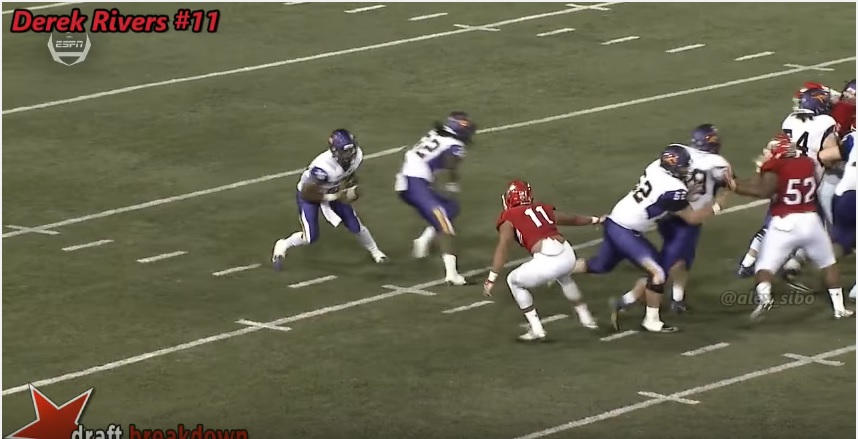 – NFL height and weight, average-ish length but overall size for the position
– Nuanced pass rusher with excellent hand use, leverage and placement
– Has a clear go-to pass rush move, dip/rip, to high degree of success
– Tremendous flexibility around the edge, able to corner and rarely taken up the arc
– Heavy handed pass rusher with a strong initial punch
– Gets the most out of his length, shows arm extension and creates space between he and the blocker
– Able to convert speed to power, above average first step
– Works hard to get off blocks in the run game, able to get and stay disengaged and fights through trash, works off reach blocks from backside on zone schemes well
– Experience playing in two and three point stance
– Does well to keep contain as a pass rusher, doesn’t freelance, and rarely taken out of the play
– Lots of starting experience, durable, no real injury history

– Length for height is not great (32 3/8 inches)
– Lacking a strong counter move, will have to fill out pass rushing repertoire, will lean on OTs when his first move fails
– Want to see stronger effort chasing the ball away from him and past the LOS
– Played against worse competition, will have to make jump from FCS level
– Didn’t move around that much, mostly on the left side, minimal experience dropping into coverage

Rivers is one of many in a long list of talented EDGE rushers who will probably be gone within the first 45 picks. Some still view Rivers as a third, or heck, even fourth round pick, but I think after the Combine, people will realize he is going to go much higher.

He’s a really nuanced pass rusher with great hand use. Isn’t just winning with his first step, speed, or strength. He wins with his hand use; his initial punch, ability to shed, and his best move.

This is against Illinois State, far from a powerhouse, but it came against a senior right tackle, not some freshmen making his first start. And Rivers made him look as silly as a pass rusher can.

You see the hand use, knocking down the tackle’s hands, dipping his inside shoulder, and cornering on his way to the quarterback.

He’s a strong athlete. This play against Northern Iowa shows it. Zone read, watch him squeeze the back, forcing the QB to keep, and then he pushes laterally to tackle him, too.

Or here, showing off his ability to convert speed to power. And it’s important to note it came against Wet Virginia, not an FCS-level team.

Again, against the Mountaineers, we see his technique. Arm extension, not completely flexed, elbows still hinged, but extended, with his hands inside the numbers of the tackle, creating power on his rush. 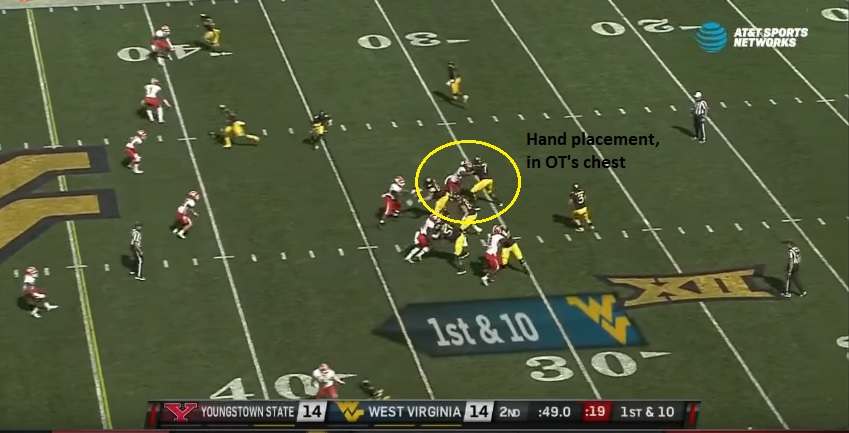 The negatives are, frankly, difficult to find. He doesn’t have much experience dropping into coverage, but there is some, and he looks fairly competent to do it. Enough for a baseline feel to say, yeah, he shouldn’t struggle there too mightily.

Frankly, I’m talking myself into entertaining him at 30th overall. I think he’ll make that push by the time the draft comes around and will be one of the first small-school selections off the board.