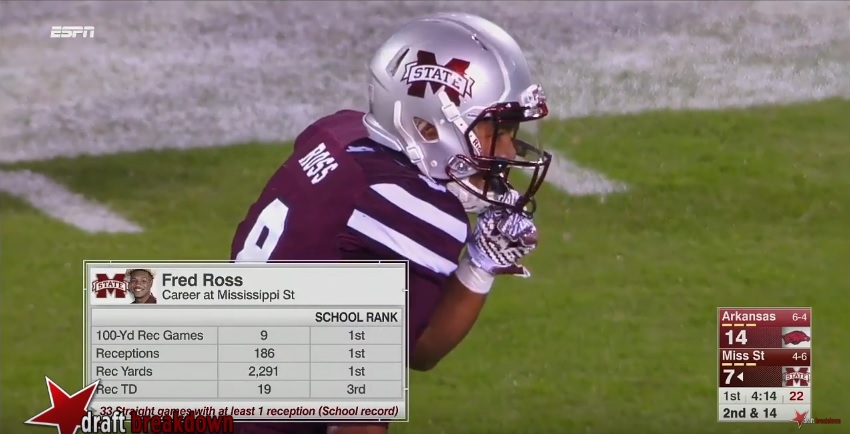 – Decent size though underwhelming due to listing (6’2)
– Soft hands, natural catcher, very “quiet” and extends hands away from his frame
– Able and willing to make catches in traffic
– Quick to tuck, not a lot of wasted motion after the catch
– Versatile, moved all around in college and spent a lot of time in the slot
– Size makes him vertical threat and will win 50/50 balls, shows timing on vertical and decent leaping ability and tracks ball well over his shoulder
– Gives impressive effort as a blocker and uses size to his advantage
– Highly productive receiver and go-to weapon in their offense
– Minor return background

– Lacking in hand size, length, and wingspan (9 1/8, 31, 75 1/4 respectively)
– Really struggles to separate, doesn’t have much burst at top of route
– Decelerates too much at top of route and needs to work harder/quicker coming back to the ball
– Likely limited as an outside receiver in the NFL, will struggle to create space in the slot
– Has trouble beating press especially when the CB is head-up and he doesn’t have a leverage advantage
– Limited as a YAC threat, speed is average and size doesn’t become a threat in the open field, goes down easily

Ross had one heck of a career at Mississippi State, walking away holding basically every record on their stat sheet. But unfortunately, I don’t believe his traits are transferrable enough to have that sort of success in the big leagues.

But first, as we often do, the good. Ross has excellent hands and is a quiet catcher capable of plucking the ball away from his frame.

Here he is against Arkansas coming across the field on an over route and plucking the ball away from his frame and is quick to the tuck, getting upfield without breaking stride.

He has decent size and does release cleanly on outside stems, beating the cornerback to the bottom here, tracking the ball over his shoulder, making the catch, and making a beeline to the end zone.

The biggest issue Ross will have is being able to consistently separate at the next level. He’s clunky off the line when the cornerback is head up and struggles with his stem on an inside release. Like here. Cornerback has outside leverage on Ross’ inside stem. He loses his footing and can’t separate at the top and the pass ends up falling incomplete.

And a similar theme here though Ross does a nice job to come downhill and work to the ball. But he’s struggling to sell the CB deep or get much space at the top and only relies on his size to box the corner out. That can sometimes work in the NFL but it won’t beat the best corners, who are going to jump that route quicker and play the pocket.

At the Senior Bowl, coaches repeatedly got on him for not coming out of his breaks hard enough and losing speed at the top. That all falls under the issue of being able to separate at the top of his route, especially on short and intermediate breaking routes. He doesn’t have great speed, it’s just ok, and he doesn’t show up much as a YAC threat. With now just average height at six foot and now other physically imposing tools, Ross loses a lot of his shine.

He’ll be a Z receiver, a possession one, a Jermaine Kearse type player and maybe not even that good of a career. Not someone the Steelers will probably be interested in, they want more dynamic receivers, and not someone I’d want them to draft, either.