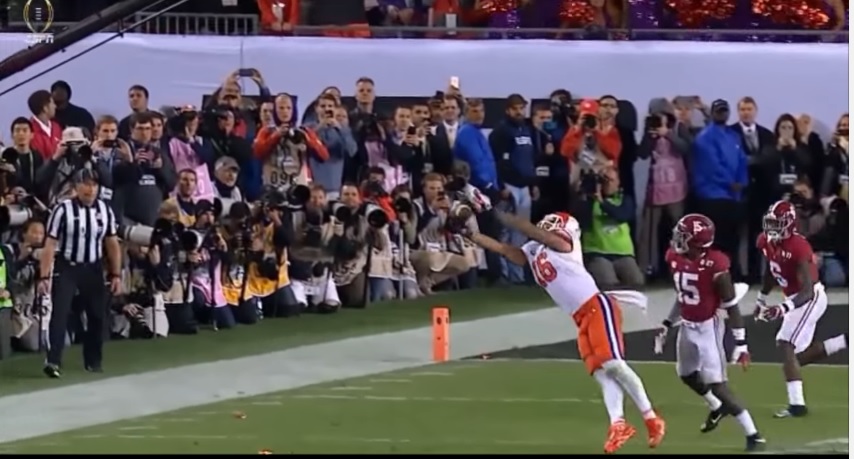 – NFL frame, long and still lean body that could add a little weight if required
– Natural pass catcher, high ability to adjust to poorly thrown passes and make soft hand catches away from the framework of his body
– Able to catch in traffic, shows concentration and makes contested catches
– Quick to the tuck, puts the ball away quickly and YAC threat
– Shows nuance in stem of his route when running vertically, able to separate at the top of his route
– Works hard in scramble drills, stays on the same line
– Gives effort as a run blocker and asked to stay in to pass protect
– High level of production against good competition
– Tons of starting experience

– Poor blocker who lacks functional strength to win the POA
– Too often falls off blocks in space and in a booth
– Not a crisp route runner and struggles to get proper depth on short to intermediate breaking routes
– Wasn’t asked to play in a three point stance or in-line blocker very often, lots of snaps off ball

It’s rare you can point a player with a broad brush and be accurate about it. But you could do so with Jordan Leggett, summing him up like this. A strong downfield threat, poor everywhere else. He can stretch the field and make impressive plays there but in shorter route concepts, and as a blocker, he struggles.

First, the good. Leggett has a great pair of hands and can make some really difficult catches. Arguably his most impressive came in this year’s National Title game, making this sensational grab with 14 seconds left. Unreal body control and ability to adjust back to the football.

And he can make contested grabs, making this reception with the linebacker hanging on him as Leggett goes to the ground.

He’s a strong route runner when asked to run vertically, able to run players off with speed, and has nuance in his route running at the top of his stem to create space. He’ll be a challenge to defend down the seams in the league, exactly where you want a tight end to win.

While he gives effort as a blocker, I won’t knock him for that, he isn’t very good at it. It’s not for a lack of experience. He may have been off ball a lot but was used a ton in their run game; he wasn’t solely removed from the tackle box and used as a decoy. Despite a big frame, he lacks functional strength to win the point of attack. Too often falling off blocks, like here, whiffing at the next level as the back gets blown up behind the LOS.

He gets marked for simply being used in pass pro, something not every tight end did, but again, not an area he did well in. Gets beat bad here in the 2015-2016 title game, giving up a sack.

I’m sure you could work on his technique some, carrying his lower half, uncoiling his hips on contact as a blocker, but I don’t know how much better he’s going to get. A Jesse James-level perhaps, maybe still a tick worse, unless his technique gets really good, which is how James saw steady improvement throughout the year.

But perspective is key when looking at a prospect. Focus on how he can win, not how he’ll use. And I think he profiles similar to Ladarius Green. He’ll win as a receiver and you’ll have to scheme him to not kill you as a run blocker.

He’s never going to be a top-tier tight end because he’s limited in a couple different ways. But he can do what he does well, making big plays, for a long time.