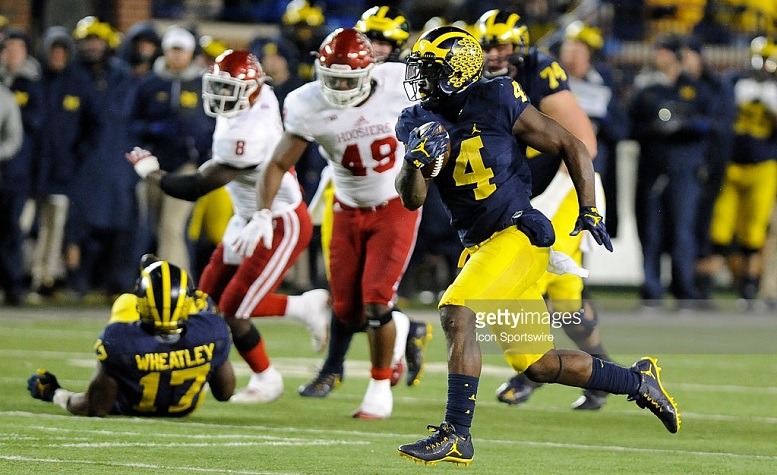 Michigan’s De’Veon Smith is about as low risk – low upside as you can get for a running back in this year’s draft. What teams see on tape of Smith is exactly what they should expect should they select the Michigan running back. This is not a knock to Smith’s abilities as many teams would welcome a north-south runner who can pass protect and has spent majority of his time in a pro-style offense.

Smith makes majority of his living running between the tackles, a necessity for a 220-pound running back that lacks flash. But what Smith lacks in flash, he more than makes up for in vision. The Michigan running back displays a good ability to understand the dynamics of his blocks and find the hole.

Smith’s big gain against Penn State was one of his most impressive runs of last season. After quickly turning up field through the massive hole on the line, Smith breaks two tackles before finally being brought down.

Smith’s vision has seen a notable improvement from his 2015 campaign to last season. Smith seemed to be a more decisive runner in his senior year, incorporating more north to south running rather than east to west like on the play below.

Watching this once, you may miss the open opportunity Smith had running off tackle to his left. The nine-yard gain helps to ease the missed opportunity but it is still a play that potentially could have gone for much more.

With the fullback successfully sealing the edge and the second level sealed off, Smith had a prime opportunity for the taking slip right through the palm of his hand. Leaving the past in the past, Smith’s improved decision making in his senior year is an important added feature to his arsenal because it is an arsenal that severely lacks burst and top end speed.

Smith often finds himself arriving second to the line of scrimmage, either met by second level defenders who have arrived before him or wrapped up by defensive linemen. The play above is an example of the latter with Smith taking too long to reach the line, being tripped up by an Ohio State defensive lineman in the process.  With a lack of acceleration and athleticism, Smith has no room for any margin of error.

Smith also struggles to add much value as a receiving option for his quarterback. While the Michigan product may have small but reliable hands for the role, his route running leaves a lot to be desired. One aspect that Smith does excel at in the passing game is providing pass protection. The Michigan running back is well equipped to hold his ground against pass rushers and quickly navigate his way to a pass rusher’s path. And while Smith’s game tape against Ohio State last season may go against the notion that he is a capable pass protector; the other numerous game tapes point to that game being an outlier.

The tapes on Smith show a substantial amount of what you see above – moving across the line, picking up an oncoming pass rusher and holding his own.

Come draft day, Smith may find himself the victim of a numbers game. In a running back class full of upside, depth and character, Smith stands out for all the wrong reasons. While Smith will still be drafted due to his familiarity running in a pro style offense, his dullness as a runner leaves little room for error and even less for upside.