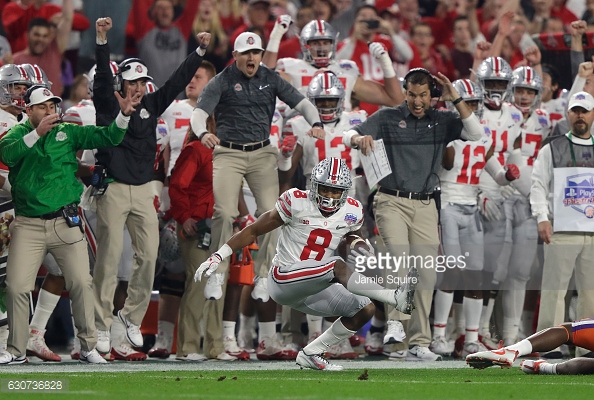 -Comfortable playing man or zone
-Reads QBs eyes well and has a natural feel for position leverage in coverage
-Above-average ball skills for position
-Has a knack for winning battles in the air with great hand-eye coordination
-Sticky cover man that is able to stay glued to hip pocket in man coverage
-Desired frame, length and athleticism for position
-Scheme-versatile corner

-Not a physical run defender
-Struggles with consistency and technique as a tackler
-Heavy feet in backpedal; plays through heels too much
-Takes bad angles and runs himself out of plays at times
-Really labors to get off blocks on the boundary
-Can be manhandled by receivers with very little blocking skills
-Becomes handsy when receiver gains a step, which leads to flags
-Prone to the big play because he labors to get out of backpedal
-Athletic, yet mechanical in COD

Ohio State has become sort of a defensive back factory over the last few years with Eli Apple and Bradley Roby becoming first round picks in the last two of the last three NFL drafts.

The Buckeyes should add two more to that list this year with redshirt sophomore cornerback Marshon Lattimore and junior safety Malik Hooker, but while those two get the majority of the hype and accolades for the Buckeyes, redshirt junior cornerback Gareon Conley was a big part of one of the best pass defenses in the country last season.

Conley, a 6-foot, 195-pound cornerback, was one of the more underrated cover corners in all of college football last season, showing the ability to play tight man-to-man coverage off the ball or on the line in press, as well as dropping into zone coverage for the Buckeyes under Urban Meyer.

As a cover corner, Conley often matched up with his opponents’ top receiver and even had a coming out game against Clemson in the Fiesta Bowl, playing a big role in holding Mike Williams to just 96 yards receiving on six catches while also hauling in an interception early in the game to give Ohio State great field position.

Conley has a great feel for the position when it comes to leverage, positioning and anticipation of a route, which is what he does here against Williams.

This is likely an interception regardless of if Williams can stay on his feet or not because Conley reads what Williams is doing, anticipates the out cut and finds the football for the big interception in the College Football Playoff game.

Along with being a very good cover corner that is able to adapt to any scheme, whether it’s zone, man or press-man, Conley also has some fairly impressive ball skills as a cornerback.

He does a great job of winning the battle in the air, getting a hand on the football and then reeling it in for the big interception on the road late in the game against the Badgers.

But early in the clip you can see him playing through his heels right at the start of his backpedal, which is a habit he needs to break.

He has too much athleticism and long speed to be playing through his heels at the start of the play, giving receivers an advantage early in the route.

Fortunately for him, this play was against a Wisconsin receiver that isn’t really a true homerun threat, so playing through his heels didn’t cost him, but when this happens against speedy receivers, he tends to lose early in the route and gets handsy once the receiver has a step on him, leading to flags down the field.

It would help if he actually utilized the press technique when at the line of scrimmage to slow the receiver down, but much like his teammate Lattimore, he’s a very minuscule part of his game.

I’m not sure if that’s the way Ohio State teaches it or not, but it doesn’t make much sense to play at the line and then not press.

I have one final clip here of him struggling with his footwork early in routes for you.

You would think with the way Conley is lined up here that he’s more worried about getting beat to the inside by the Michigan slot receiver, but at the start of the route he seems more concerned with covering the out route, which leaves him vulnerable to the in-breaking route, which Michigan runs to perfection here.

At the very top of his stem, Conley is a bit slow to plant and change directions, and I think a lot of that has to do with heavy feet early in coverage. He struggles with balance in these situations because he has so much weight on his feet that it’s almost like he’s moving in concrete shoes at times.

Outside of his skills (and deficiencies) as a cover corner, Conley is a big turnoff when it comes to a run defender and tackler.

That seems to be a problem most of the time with Ohio State corners as Conley reminds me of Apple from last year in this regard.

Granted, Conley’s role is a shutdown cover corner for the Buckeyes, but it’s really discouraging to see him get manhandled on the edge time and time again against the run when he’s not hesitant to fill his lane against the run.

And even when he’s in position to make a stop in the open field, his technique and effort are rather poor, leading to big plays.

In the clip above Conley does a nice job of flowing to his right with the blocker before disengaging to fill the hole, but the effort and technique to wrap up just isn’t there as Wisconsin’s Corey Clement just rolls right through him on his way to a 68-yard run.

That’s just unacceptable by Conley, especially when he’s right there to make the play. Those types of gaffes at the next level will push him to the bench.

You have to be able to tackle and have some physicality to your game, and I just don’t see it consistently from Conley.  Should he be able to correct this at the next level, he’ll thrive because he already has the coverage skills, but it’s the other little things that can make or break a career.

Despite playing in 41 games at Ohio State, I still think Conley is a project heading into the NFL and could have really served him well by staying for his senior season with the Buckeyes to work on his tackling and physicality.

It was a gamble to come out this year, especially in a loaded corner class, so let’s see if the redshirt junior’s decision pays off for him.

I do think he’ll get drafted somewhere late in the third round because of his coverage skills, but whichever team drafts him has to have a plan for him. They can’t just throw him to the wolves and hope he somehow learns how to be physical and tackle in the pros.