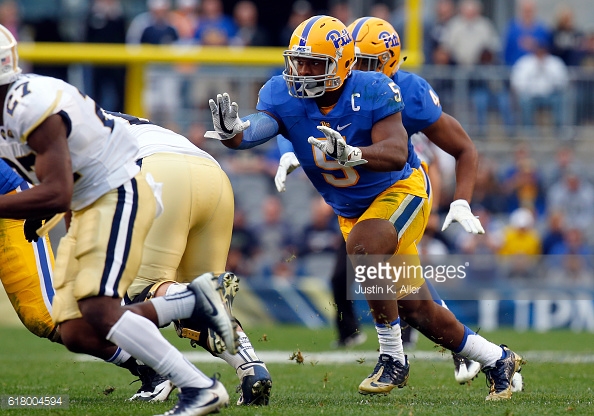 – Explosive first step, quick out of stance
– Shows hip/ankle flexibility around the edge, ability to corner and not get run up the arc
– Uses lack of height to advantage and able to rip under linemen
– Wins with a variety of moves (speed, rip, spin)
– Has a plan as a pass rusher and capable of reading OT and reacting based off his set
– First step allows him to one-gap and penetrate against the run
– Stastically gaudy career, dominant level of production

– Lacks height and length
– Doesn’t have functional strength and struggles to produce much power
– Leg drive needs work as a pass rusher and is often unable to convert speed to power on bull rushes
– Gets stuck on tackles if he can’t win initially and becomes useless
– Unlikely to be able to two-gap and hold the point of attack, limiting role and potential
– Played with his hand down, little to no experience with hand up and dropping into coverage
– Length injury history for first three seasons of college

– Two year starter for the Panthers
– 2015 and 2016: 42.5 TFL, 24.5 sacks
– 2016: 23 TFL, 13 sacks
– Second-Team All-American and First-Team All-ACC senior season
– 4th all-time in Pitt history in sacks
– Played linebacker freshmen year before moving to defensive end
– Suffered two chest injuries and a back injury from 2012 to 2014, missing 2012 and 2014 entirely while limiting himself to six games in 2013
– 2014 injury was torn left pectoral muscle
– Originally committed to Ohio State, part of same class as Ryan Shazier, but was granted release and joined Pitt
– Attended Woodland Hills (PA) High School
– Prefers to be called “Juan”

Price was someone who garnered comparisons to Haason Reddick. In that, “if you liked 21 Jump Street, you’ll love 22 Jump Street.” Unfortunately, to me, I see more of a Die Hard vs A Good Day to Die Hard. Which is to say, one of those is really impressive and the other is nothing more than disappointing imitation.

On the good side, Price is an explosive player who should post a strong 10 split at this upcoming Combine. He wins with his quick first step and ability to bend the edge, using his lack of height to his advantage. Like here.

He can win in several ways as a pass rusher. He has an effective spin move that he’ll use if he can’t win with speed.

But if he can’t win immediately, he struggles to disengage. Hand use is inconsistent, again, can’t shed if tackles get their hands on him initially, and he lacks the strength/power to get away.

Price wasn’t asked to two-gap against the run very often, which is good, because he’ll struggle there. Lacks the functional strength to hold the point of attack and he’ll get pushed around at the next level.

On tape, I didn’t see any evidence of him playing with his hand up or dropping into coverage. He served as Pitt’s field side defensive end and had one job – go forward and get after the QB. That’s one key difference

Essentially, and you may have already figured this out, Price is a situational, third-and-long pass rusher. His ability to succeed is limited and reduces his value and upside. Don’t ask him anything to do other than get after the quarterback and even then, he’s going to go through hot and cold spells. He’s a quick and a smart pass rusher but he isn’t a good one in terms of strength, making it easy for tackles to plan for him.

There is some value there with Price and he’s a draftable candidate because hey, pass rushers get collected like pots of gold, but at best, he’s very much a situational piece.