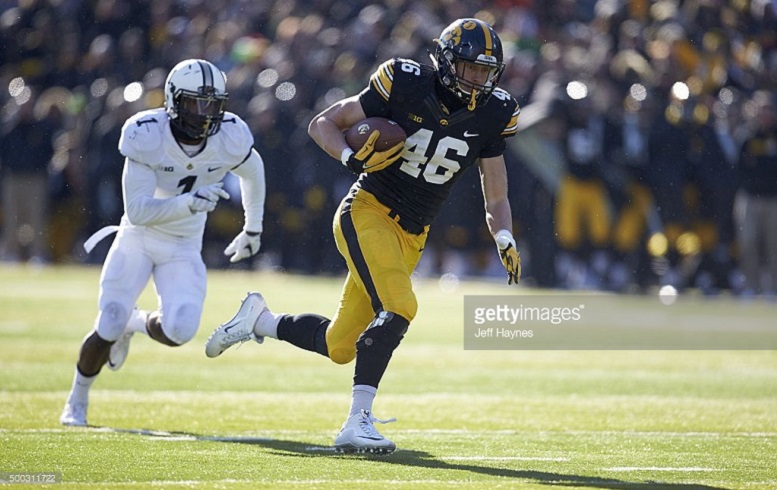 If there’s a player you would like us to breakdown, let us know in the comments below. Today, another tight end for you to examine.

– Nice build for tight end with powerful legs and good use of leverage
– Great motor and never takes plays off. Very blue-collar-like
– Very effective blocker both on line and out in space with multiple pancakes
– Reliable receiving target and caught roughly 60% of all passes thrown his way in 2016
– Can run away from linebackers in middle of field on slants and on edge
– Smart player
– Special team abilities
– Plays hurt

The main thing I took away from Kittle while watching his tape is his ability to block in addition to his workman-like attitude. While I didn’t include many gifs of it below, he had several pancake blocks in the four games that I watched and he always finishes plays. As you would probably expect from a Iowa tight end, Kittle was used more as a blocker than he was as a pass catching option.

Below are two plays that really show you how effective and consistent Kittle is as a run blocker. In the first play, a goal-line power run against Miami of Ohio, Kittle blocks down inside very effectively and in turn the fullback and pulling guard have plenty of room to lead the running back into the end zone.

On this play below against Minnesota, Kittle easily drives the edge defender way outside and up the field and it helps result in an explosive run.

Do you like black and gold pancakes? If so, Kittle’s tape is full of them and here’s one Mike Mayock of the NFL Network posted on Twitter that he found on some all-22 footage from the game against North Dakota State. Beautiful domination on display here.

Can you tell that George Kittle / Iowa TE 46 / is the son of a former Hawkeye OL ?? Bend, explosion, feet and finish ! pic.twitter.com/Uevlfdcoeo

Kittle is also an effective pass blocker as well. On this play below against Minnesota, he gets beat initially off the edge and even flat-backs before recovering and taking the rusher around the quarterback after having his faced crossed. This was perhaps Kittle’s worst pass protecting effort that I observed and he still managed to win nonetheless even though the deep pass attempt was ultimately intercepted.

While Kittle wasn’t used extensively at Iowa as a receiving option, he still made several big plays and showed that he could get himself open and especially on brilliant play designs. As you can see below in the game against North Dakota State, Kittle does a great job of selling a run block before releasing down the far sideline wide open for an easy pitch and catch explosive play off of play action.

There’s both good and bad in this next play below against North Dakota State. You’ll see Kittle come across the backfield at the snap out of the left h-back position like it’s going to be a split zone run with window dressing behind him. Kittle then runs a wheel route and leaves two committing defenders in trail for an easy catch down the sideline. After making the catch, however, Kittle doesn’t move the football to his outside arm and thus exposes it to the middle of the field. He ultimately has the football stripped from him and luckily a teammate is there to make the recovery.

Some more good and bad mixed in one single play against Miami of Ohio. Here, Kittle gets a free goal-to-go release and his short crossing route results in him easily running away from the defender. The pass to him is ultimately a very catchable one that he drops in the end zone. This was a third down play and Iowa had to settle for a field goal.

I had to dig deep to find a large selection of game tape on Kittle and I’m glad I did. While he certainly isn’t one of the top tight ends in this year’s class, he’s one of the more well-rounded ones and as mentioned several times, really blocks well.

While Kittle might not ever be an every-down tight end in the NFL, he certainly can function as a number two in an offense that likes to use multiple ones. The Steelers are certainly one of those teams and with David Johnson unlikely to be back in 2017, Kittle could probably wind up being an upgrade over him should he ultimately land in Pittsburgh.

As I was going through Kittle’s tape I was hoping to see him get some snaps as a lead-blocking fullback but that wasn’t to be the case. Even so, I think he could handle such a role. I also hoped to see him used as a split zone and move blocker, but that also wasn’t the case. Once again, however, I think he has the skill set needed to do that.

Kittle is obviously more old school tight end than he his new age but that’s fine. While I hate player comparisons, I couldn’t help but think that Kittle reminds me a little of former NFL tight end Dallas Clark, who just so happened to also play his college football at Iowa. Maybe a shorter version of current NFL tight end Jack Doyle, who I really enjoy watching play.

In summation, I see Kittle being drafted somewhere during day-three and possibly in the fifth or sixth round. If the Steelers want to draft a tight end on day three, I fully endorse them selecting Kittle as he already looks great in black and gold. I can’t wait to watch him participate at the scouting combine in a few more weeks. You won’t be sorry if you spend an hour or so watching his 2016 tape.