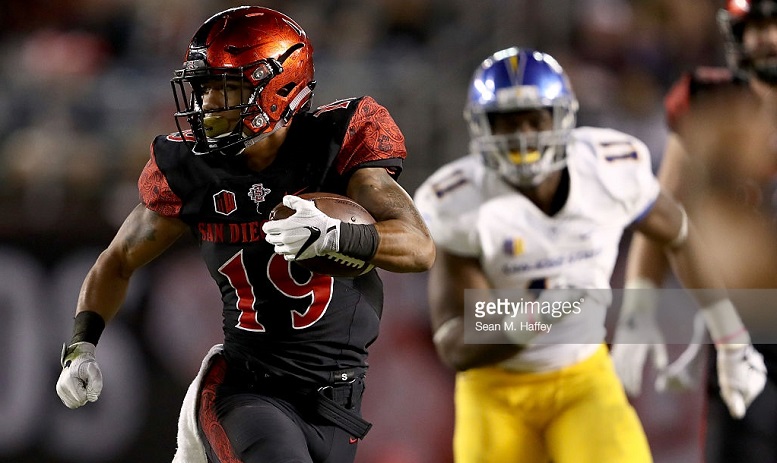 – Size presents many durability concerns
– Will get caught from behind in a foot race
– Easy to stuff running up the middle
– Size hinders momentum, not able to push pile forward
– Raw receiver that could use some more polish

At 5’8 and 180-pounds, Donnel Pumphrey could draw dangerous comparisons to former Pittsburgh Steelers player Dri Archer. This would not be a fair comparison though, as Pumphrey offers more durability, pass protection and understanding of the running game than Archer ever did. After watching tape on Pumphrey, a fairer comparison would be Philadelphia Eagles running back Darren Sproles. Like Sproles, Pumphrey is undersized for his position but plays with elite burst, vision and agility to create yardage.

I do not think I have to say much about Pumphrey’s ability to change direction because sometimes I struggle to put into words how impressive his agility is. Pumphrey can put his foot in the ground and change direction within an instant, giving new meaning to the term ankle breaker in the world of football.

California’s Cameron Saffle knows all too well about the feeling of having his ankles broken at the hands of Pumphrey. Saffle (#51) has backside duties on this play but his priorities as a defender change after a confrontation with Pumphrey. After Pumphrey plants his foot and cuts outside, Saffle biggest obstacle is no longer catching the San Diego State running back but trying to stay on his feet.

More of the same here against Fresno State, as Pumphrey maneuvers out of harms way and is able to turn in a positive result on the play.

Besides, his lightning quick agility, majority of Pumphrey’s yardage is a result of his vision and ability to navigate his way through running lanes. Watching Pumphrey on film, the running back shows a great understanding of how his blocks are developing and how the defense will react. If the space is provided, Pumphrey can use this to produce a big play, something that he did frequently at San Diego State.

Pumphrey notices Houston linebacker Steven Taylor (#41) creeping into the A gap and then bounces behind his fullback, setting up a foot race down the sideline. Pumphrey’s vision is so impressive that it almost acts like an additional blocker.

The biggest knock on Pumphrey’s future is without a doubt his size. While the NFL has carved out great talent in Sproles, it has also routinely chewed up other small sized running backs. While Pumphrey did break more tackles than I expected on film, which will only help his stock, he was limited to the space provided to him. Powering through a congested line of scrimmage is not Pumphrey’s strong suit. Even running with a full head of steam does not seem enough for Pumphrey to scrap out necessary yardage.

Here is Pumphrey shot out of a cannon with his sight set on crossing the goal line. In full, the run looks like a car crash, with Pumphrey running full speed into a wall, crumbling on impact. The wall in this case is the Fresno State defenders who despite being at a weakness in momentum, win the battle by flattening Pumphrey on impact.

Pumphrey’s NFL success and draft stock comes down to finding the right scheme and fit. The San Diego State product is not going to cause much damage in the trenches, leaving the ways to utilize his skill set as a battle of predictability. An offensive coordinator must balance Pumphrey’s play in a way that will not give away how he intends to use him. While teams like the San Diego Chargers and Philadelphia Eagles have had success doing this with Sproles, the Steelers struggled finding ways to be unpredictable with Archer. For this reason alone, I cannot see the Steelers taking a flyer on a player like Pumphrey. Look for a team to take Pumphrey during the third-fourth rounds in hopes of utilizing him as a change of pace back.

Games Watched: vs Fresno State, vs Houston, vs Cal, vs Wyoming, vs Nevada