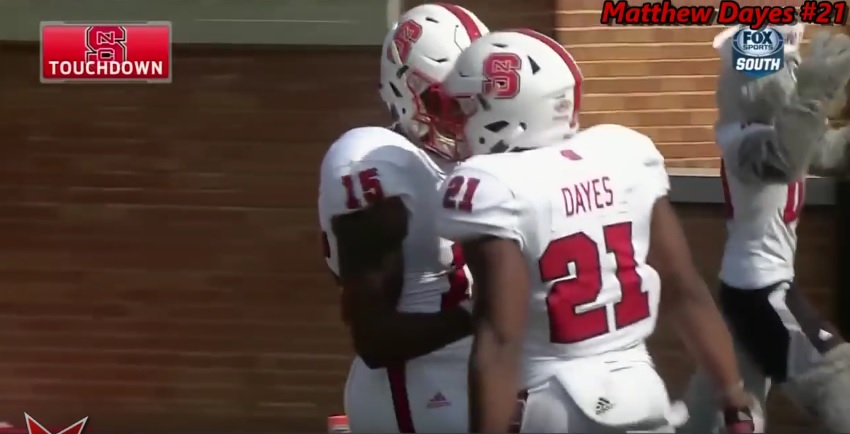 – Big hands for frame (10 1/2 inches)
– Prototypical zone runner, plays within its structure with feet, technique, and eyes
– Excellent feet and ability to change direction, fluid hips, and can make third level defenders coming downhill miss
– Vision in zone schemes, quickly diagnoses and reads hat of linemen, makes decision on third step, cuts on fifth
– Shows above average burst and reaches speed quickly, finds and hits the hole in a hurry, can beat slower linebackers or those who take poor angles to the edge
– Attempts to square up in pass protection and gives effort, coachable
– Competent out of the backfield, used as a receiver and has some experience lining up as a receiver
– Lack of height improves pad level, shows leg drive, and though not innately powerful, can get 1-2 additional yards after contact

– Will get knocked for size, short but not small
– Lacks long speed and may have trouble outrunning a lot of defensive backs, won’t test great
– Not innately powerful and struggles to run through arm tackles, will have problems along the goal line
– Contact balance is not great and goes down relatively easily
– Struggles to anchor in pass protection and recognition is spotty, will need work
– Fumbling concerns and ball security needs improved
– Has not proven himself to be a workhorse back

Dayes is pretty cut and dry to me. He’ll fit best in a zone heavy scheme because of his feet and eyes. He’s the guy Mike Shanahan or Alex Gibbs would look at and know they could make him into a 1000 yard rusher. And not many other belief systems will be able to get that out of him.

Because those are far and away his two best traits. His eyes and feet.

This is against Wake Forest in 2015 but Dayes shows the ability to get skinny through the hole, plant to change direction, make the safety miss, and immediately get up to speed to house this one.

Dayes has excellent vision on zone schemes. He follows his rules, making his decision and execution on the correct steps while showing vision and adherence to his zone rules. On this run, the interior DL’s hat stays down, the end remains as the force, and the safety comes over the top too. Dayes sees It and cuts upfield. Outside zone here. On his 7th step, he’s upfield.

But all is not perfect with him. His long speed is merely average and his power isn’t much beyond some leg drive and the built-in leverage. He’s tough but don’t confuse that with power.

There’s effort in pass pro and he does a nice job staying square but his technique needs work and at times, he can just get run over by bigger linebackers. Flattened by this MIKE coming up the A gap.

He fumbled three times in the regular season and once again on his first carry at this year’s Senior Bowl. Ball security is something he’ll have to be better at, too. Here’s one example from this year.

Again, Dayes is a fit for a zone-heavy team that doesn’t mean having a short back. His feet and eyes are really good, some of the better you’ll probably see, but he lacks any other defining physical characteristics. When you’re not that fast, not that powerful, and not exactly a huge threat in the pass game, it’s hard to envision a giant ceiling with him. A committee type unless, as I said, you get a Gibbs’ disciple, who can take his game to new heights no one else can.