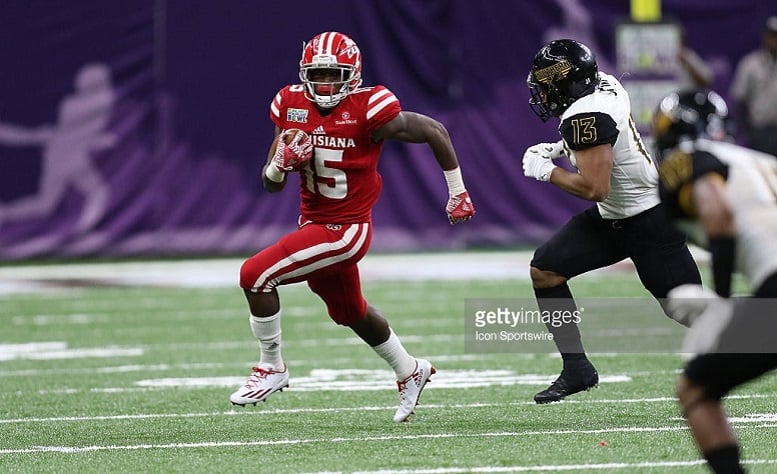 Freshman of the Year, Conference Player of the Year, it all came fast for UL-Lafayette running back Elijah McGuire and then a lingering foot injury left him at less than 100-percent for his senior season. The injury showed during McGuire’s senior season as his 4.9 yards per carry was the lowest of his NCAA career and led to multiple poor outings. All was not bad though, as McGuire still showed that he cold be an important member of both the running and receiving game, 100-percent or not.

North Western has two backside defenders in the backfield and not one of them are able to match McGuire’s quick change of direction and burst. Cutting back from the direction that his offensive line is pushing, McGuire has a clear path to the end zone.

Below is another similar example, except this play also incorporates McGuire’s ability to make defenders whiff.

Almost identical circumstances as the first play except with a few different variations. Another hole presents itself due to the blocking scheme but this time McGuire is met by a defender at the second level.  McGuire’s lateral cut leaves the impression that the Southern Mississippi defensive back was competing in a game of playground tag and not football. In either scenario, McGuire comes out victorious, mustering a few more yards on the play.

McGuire’s speed, quickness and agility foreshadow his ability to be a threat as a receiver but surprisingly neither of those three are his strongest trait as a receiver. McGuire’s hands are perhaps the most impressive that I have seen out of any running back thus far. In the open field McGuire does not play like a running back, in fact he could pass a receiver.

Running a wheel route up the sideline on the play above, McGuire, a running back, flashes all the traits scouts love to see when watching a wide receiver. Meets the ball at its highest point? Check. Adjusts his body to get in position for the catch? Check. Maintains possession through contact? Check. And lastly, shows awareness for the sideline? Check.

Equally as impressive as McGuire’s hands is his crisp route running that leaves an impossible task for any linebacker matched up one on one with him.

Running out of the backfield, McGuire pivots like he is going up field, in doing so Boise State’s Gabe Perez (#33) opens his hips. From here, McGuire sharply cuts out to the sideline giving himself a couple yards of separation, Perez has no chance on the play.

Well rounded as a receiver, McGuire is a perfect candidate for a third down back in the NFL. What solidifies McGuire to this role is his ability and experience in pass protection. When McGuire is not running routes out of the backfield, the Louisiana back is busy protecting his quarterback. McGuire is able to anchor consistently and challenge oncoming rushers.

McGuire more than holds his own here, keeping a fundamentally sound pad level and extending, resulting in the BYU defensive end to bounce back from impact. Just another reason why I figure the Louisiana back will round out well as a third down back.

The ability is there for McGuire to be a contributor at the next level but the biggest question is if the consistency is there as well. In five games last season, McGuire finished with over 5-yards per carry but on another seven occasions McGuire finished with under 4-yards per carry. McGuire projects to be a late round project for a team hoping to utilize him as a third down back or perhaps groom him to contribute in a running back rotation.