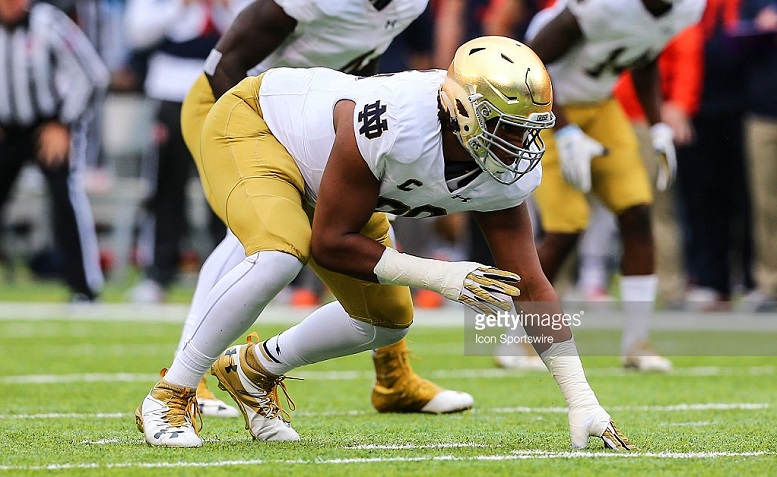 – Doesn’t have the best center of gravity which puts him in awkward positions
– Quick in a straight-line, but does not move laterally well
– Relies on power, doesn’t have pass rush moves
– Spotty vision
– Needs to follow up punch with a swim, rip, or some other technique
– Could get more aggressive to reach the quarterback

– Team captain senior year
– Started 37 of last 38 games in past three seasons
– Finished with 83 career solo tackles, 84 assists, 22 tackles for loss, 4.5 sacks, a forced fumble, and six pass deflections
– Ranked 9th by Rivals.com in his class for defensive ends
– Won a high school state football championship in Georgia playing the offensive and defensive lines
– Blocked a kick against LSU in 2014

Rochell gets a good punch into the blocker, keeps them off his body, and works down the line of scrimmage to find the ball carrier and brings him to the ground violently.

He gets off the line of scrimmage quickly, then gets double teamed by two backs. The defender splits the double team, throws one of them out of the way while stepping up into the pocket to devour the signal caller.

The defensive end gets too aggressive by coming too far inside; this allows the fullback to chip him out of position. This lack of contain opens up a wide rushing lane for the quarterback to exploit and eventually score.

The former Golden Domer is a natural five tech who fights off double team, anchors his position while reaching out, and mauls the running back for a minimal gain.

Rochell is a hard worker that can play up and down the defensive line giving the starters a well deserved breather. His lack of defined pass rushing moves limit him to more of a backup run stopper at the next level. If the defender can add to his powerful punch a swim or rip and go move, he might be able to contribute in a three down role. At this time, the former Notre Damer is a piece of clay that could be turned into a valuable defensive cog with NFL coaching.