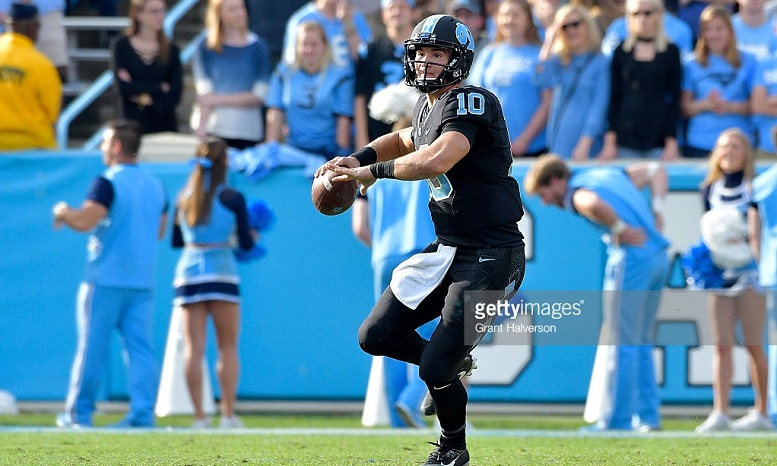 – Great Football IQ and understanding of defensive schemes
– Great Decision Maker
– Showed toughness in the pocket: stood tall in the face of heavy pressure when making throws
– Good anticipation
– Throws very catchable passes and is generally accurate, especially on out-breaking routes
– Decent Throwing Mechanics and fairly quick release (he sometimes lets the ball kick out too far away from his body, which increases his release time; however, this is nit-picking)
– Functional mobility when scrambling behind the line of scrimmage – not the fastest QB, but he gets the job done

– Sometimes struggles to feel incoming pressure
– Limited Experience: Only started one season at North Carolina
– Tends to throw behind on in-breaking routes
– Average Arm Strength; often floats the ball on deep throws
– Average athleticism
– Never took snaps from under center
– Average accuracy when throwing on the run
– Ball placement can improve (to clarify – he IS accurate in that he consistently throws catchable passes to his receivers; however, he doesn’t always put them in the best position to make a run after the catch)

Unlike some of the other top quarterbacks in this year’s NFL Draft (such as Deshone Kizer or Patrick Mahomes), Mitch Trubisky does not dazzle with elite arm talent or supreme natural athleticism. Instead, he earned his high draft value by demonstrating a comprehensive understanding of opposing defenses and by exhibiting excellent decision-making ability. Although he must improve his ball placement on in-breaking routes, as well as his pocket awareness, Trubisky’s ability to identify defenses and work through full-field progressions make him, arguably, this year’s most pro-ready prospect.

Because Trubisky’s success is largely predicated on his keen understanding of defensive schemes, many of his great plays were relatively subtle. For example, in this first clip, Trubisky relies on his intellect to outmaneuver Virginia and pickup 17 quick yards. Specifically, North Carolina is running an RPO (Run-Pass Option) against a (pre-snap) Cover 2-Man alignment. The defense has the numbers to the field-side (making the bubble screen option unattractive), while the corner to the boundary-side is in press coverage and has inside-leverage (making the slant-route unattractive). Despite these pre-snap reads, which should indicate that the run-option is the better call, Trubisky demonstrates his situational awareness and doesn’t fall for the defense’s bluff. Instead, he understands that there is a heightened threat of boundary-side corner-blitzes when the ball is on the hash, and reacts to this threat by keeping his eyes on the corner during his play-action fake. When the corner does in fact bring pressure, Trubisky is ready. He calmly sets his feet and throws the hot-route to the vacated area. Textbook play:

Next, Trubisky again showcases his understanding of defensive schemes by recognizing, and taking advantage of, Florida State’s coverage disguise. North Carolina was trailing 34-35 with nine-seconds remaining, but Trubisky nevertheless sets up a game-winning field goal with a great read and throw. (Note – the broadcast angle didn’t capture the full play, so screenshots from the wide-angle are used below):

Pre-Snap: Florida State is seemingly playing Cover 2-Man pre-snap. Although the free safety is deep and is keeping his eyes outside, the strong safety hints at a possible coverage roll by slowly creeping towards the middle of the field as Trubisky yells his cadence: 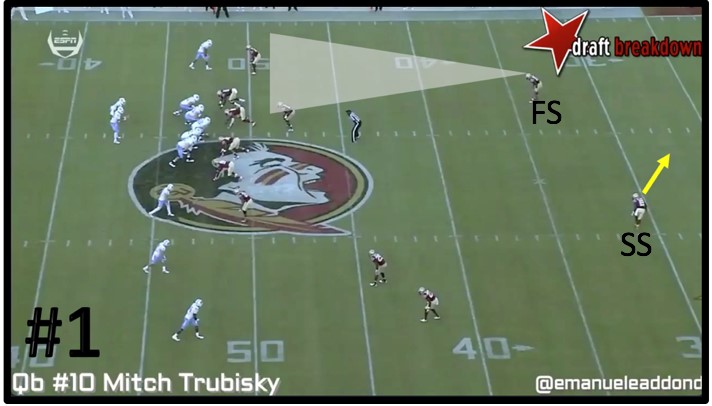 First-Step of the Drop back: As soon as Trubisky catches the snap, he gets his eyes to the strong safety to confirm the coverage. The SS has realigned and dropped deep in the middle of the field, signaling that Florida State is now playing Cover 1. In response, Trubisky shifts his vision and locates the free safety, who now has his eyes across the field on the inner-most trips receiver, indicating “robber” coverage: 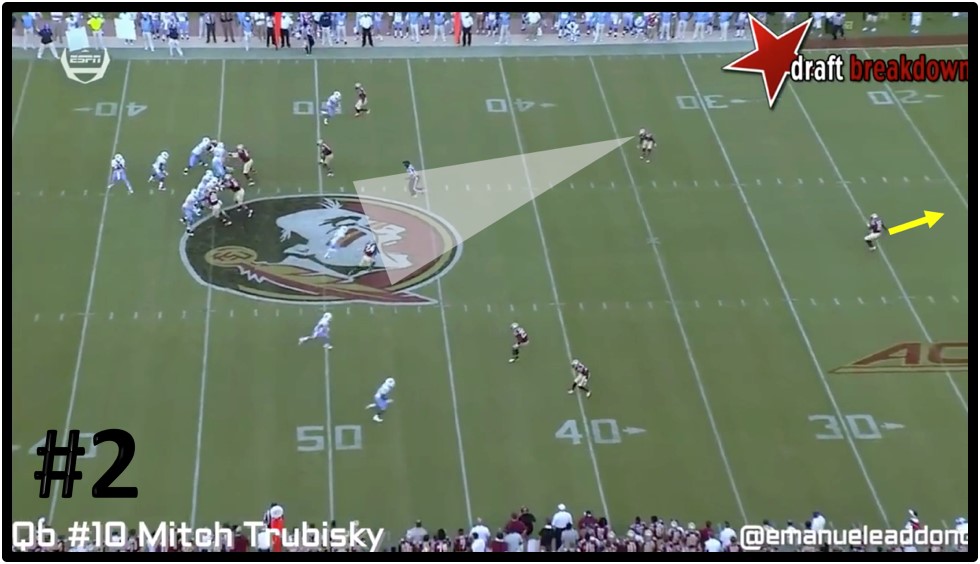 Top of the Drop back: At this point Trubisky has all the information he needs to make a play. He quickly processes the defense and identifies its weak point. The free safety has planted his foot and is driving on the inside trips receiver; while the strong safety is still in his backpedal and is gaining depth. Moreover, because Florida State is in Cover 1-Robber, Trubisky knows that the back-side post route is a great option, since his receiver only has to beat a one-on-one match-up and has tons of field to work with inside: 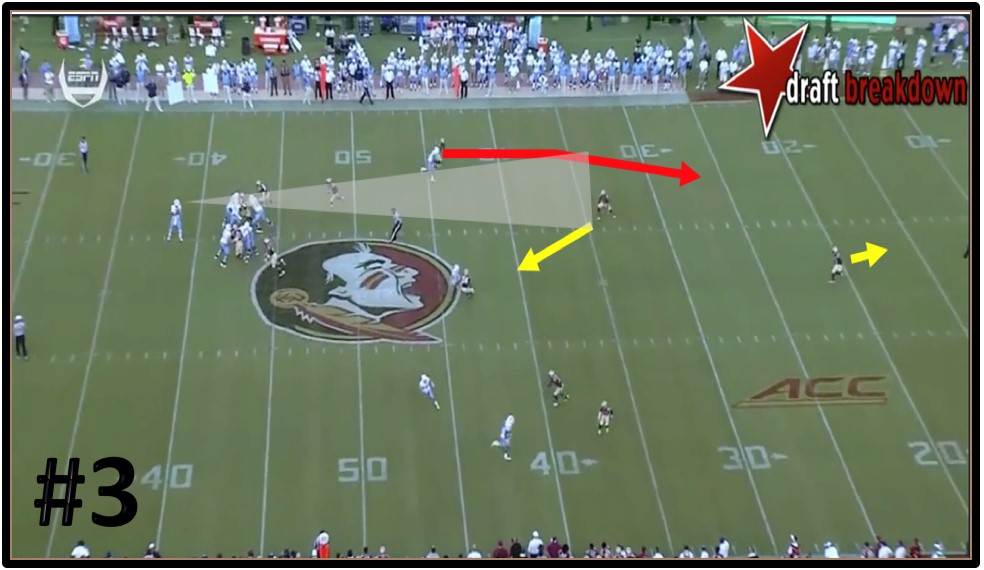 The Throw: Trubisky hangs in the pocket and makes a safe and accurate pass to the open part of the field. The Florida State defender got beat inside on the Post-route and was forced to commit pass interference in order to prevent the catch. Regardless, Trubisky’s quick thinking and great throw is what ultimately caused the penalty and allowed North Carolina to secure the victory: 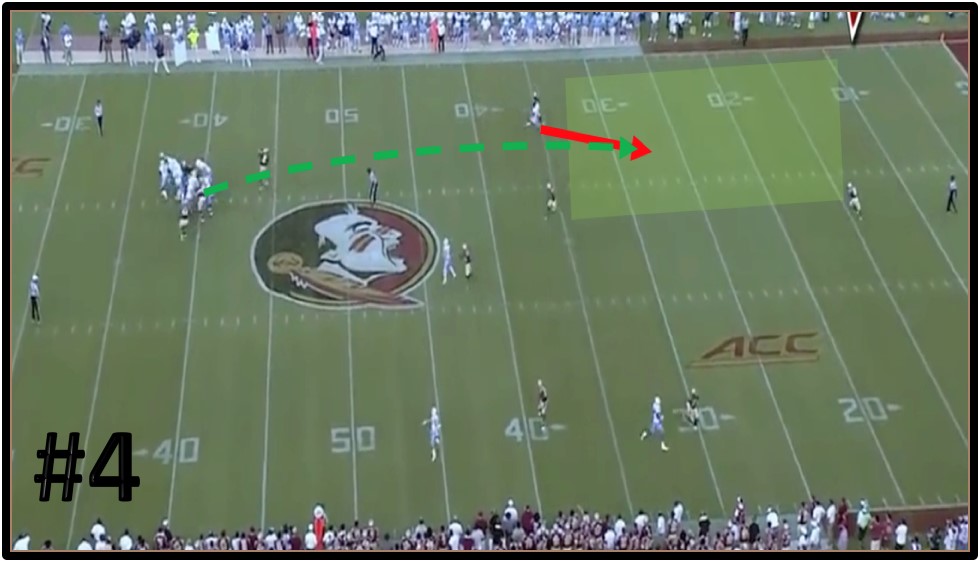 The next clip illustrates Trubisky’s ability to calmly survey the entire field and work through a full progression. He does a good job of moving his feet synchronously with his eyes/head, which allows him to stay balanced throughout the play:

Here is an example of Trubisky’s toughness in the pocket and ability to throw an accurate pass under pressure. This is an NFL-caliber throw that he will certainly be asked to make at the next level:

On the negative side, Trubisky tended to react very slowly to pressure within the pocket, almost as if he was too calm and too relaxed while surveying the field. He actually has good pocket mobility and can evade the rush when he sees it coming; however, his main problem is that his overall awareness in feeling the pressure can be poor at times. For example, in this clip against Duke, although he has time to throw and although the rusher slowly advances directly in front of him, Trubisky fails to sidestep or react in any meaningful way. Consequently, he is hit as he throws, leading to a game-ending an interception:

In this final clip against Virginia Tech, Trubisky again fails to have a good sense of incoming pressure and nearly costs his team a safety. He has to either be smarter and throw the ball away, or he has to develop better awareness of the rush. Given that he had a terrible offensive line which can account for some of his struggles, he still too often took sacks that should have (and could have) been avoided. This play is just one example:

Overall, Mitch Trubisky was a very good college quarterback who has a big head start in the mental aspect of the game compared to some of his NFL Draft classmates. His playing style reminded me of former New York Jets and Miami Dolphins quarterback Chad Pennington. Like Pennington, Trubisky is a pocket-passer with relatively average arm strength and who tends to float the ball on deep passes. However, he also is courageous in the pocket, shows consistent accuracy, and has a great understanding of defensive schemes.  As a result, if Trubisky can continue to expand on his football knowledge and develop a little bit more pocket awareness, he too can have a very productive NFL career.

Games Watched: vs Pittsburgh, at Florida State, vs Virginia Tech, at Miami, at Virginia, at Duke, vs NC State, vs Georgia