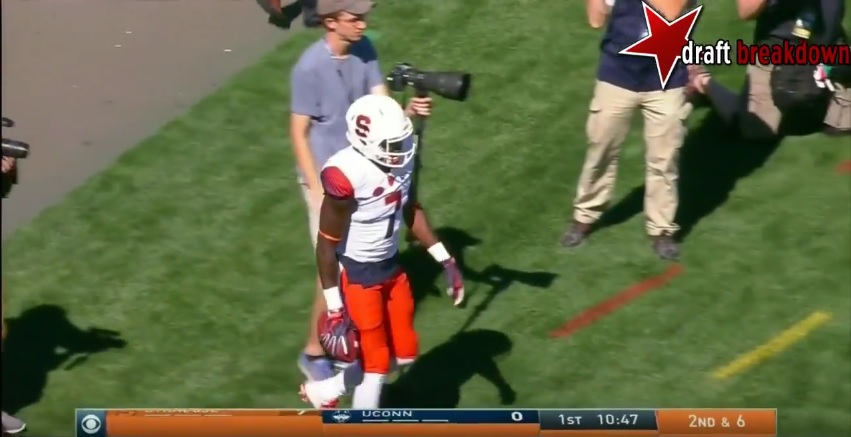 – NFL size with good length (32 inch arms)
– Shows ability to catch ball away from his frame, solid catch radius
– Big play maker vertically who tracks the ball well, times his jumps, and shows vertical to win 50/50 balls, willing to be physical and fight for the ball
– Technical route runner vertically with the ability to stack the CB and use frame to box out
– Shows surprising burst and ability to separate at the top of his route
– Size can make it tough for smaller DBs to bring him down, fights and gets extra yardage, and has YAC ability overall
– Able to beat press coverage, strong hands and good acceleration once he gets upfield
– Picked up new system quickly in 2016 and flourished, evidence of a good football IQ and work ethic

– Small hands, especially relative to height (9 1/4 inches)
– Inconsistent hands and too many drops, doesn’t really body catch, just seems to lose focus
– Allowed to play in space as X receiver in college, often isolated, will have to learn to play in traffic in NFL
– Has to be more detailed, avoid stacking bad plays, and work back to the football underneath
– Lankier frame and long lower half will make it a challenge for him to sink and separate against quicker CBs on underneath routes
– Lacks long, top end speed, wins with stride length, not actual speed
– Only one year of serious production

– 2016 was first year as starter and first year with Syracuse
– Graduate transfer from Maryland
– 15 game starter in three years with the Terps, caught 61 passes for 938 yards and three TDs
– 2016 with Syracuse: 94 receptions, 1482 yards 14 TDs
– Older brother briefly played football with Clemson before being forced to retire due to a heart condition

Amba Etta-Tawo was a guy I was hoping to be one of my sleepers. While I still have hope, a poor Senior Bowl performance muddied my expectations. But first, the good, and let’s talk about where he wins.

I bet every scout and every report will say the same thing. He wins vertically. Averaging nearly 16 yards per catch last season is a testament. He’s a long strider, a build-up speed guy, who also plays with good technique.

Love this route here. Stem to the outside with burst to beat the corner in press alignment, stack on top of him vertically, and track the ball to adjust and snag it away from his body.

His lanky frame makes it tough for him to be brought down and overall, he plays with plus physicality. Safety bounces off of him on this post and he runs into the end zone.

As the isolated X receiver to the backside, seeing a lot of man/solo coverage, so he’s experiencing in beating press ad does a nice job of it. Has a plan and shows strong hands with some burst once he gets leverage and is able to run upfield. He isn’t always the quickest at shaking free laterally though because of his long stride length.

And hey, you have to give the guy credit for being such an important, immediate force the Orange. Stepped right in and had one of the most productive seasons of any wide receiver in college football. That isn’t easy and it wasn’t like he was playing for the league’s most explosive offense (90th in points per game).

While he shows the ability to catch away from his frame, he had a heck of a time down in Mobile. Dropped more passes than probably any receiver down there, though I did hear a rumor he had a broken pinky. But the drops showed up on tape too, and not just the occasional “meh” drop every receiver is going to have, especially ones targeted as often as him. Some bad, unfocused ones like this would-be touchdown against UConn.

I do like the burst he has but in the short and intermediate routes, he does have trouble sinking his hips and creating space. That’s not where he wins. Where he wins is vertically. It’s a little similar to Chris Moore, a slowish but big play maker drafted in the 5th round a year ago by the Baltimore Ravens. But I liked Moore, uh, more, because he had better body control and was a more fluid receiver.

I do like Etta-Tawo more than the WR we profiled two days ago, Fred Ross, as a better YAC and vertical threat who shows the ability to separate better overall.

That deep threat ability for Pittsburgh is intriguing and something they value but he’s not a unique enough athlete for me to think they’ll pay much attention to him in the pre-draft process.