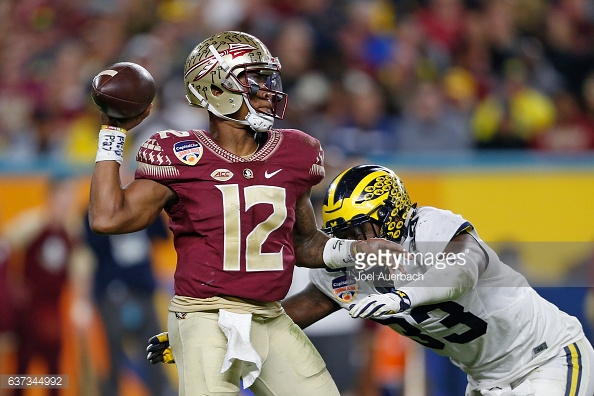 -Limited hand usage as a pass rusher
-Doesn’t seem to have a plan snap to snap on how to best attack OL
-Lets blockers get into his body and struggles to disengage
-Inconsistent with get-off
-Slow at setting up pass rush moves, if at all
-Very small arsenal of rush moves
-Only one season as a full-time starter

-Three-year letterman with the Wolverines
-Appeared in 46 games, making 15 starts at defensive end
-All-Big Ten honoree and 2016 first team as voted on by coaches and media
-Finished Michigan career with 94 tackles, 28 tackles for loss and 19 sacks

It’s very clear early on when watching Michigan’s Taco Charlton that’s he’s a very raw athlete playing defensive end for the Wolverines, but he’s one with an incredibly high ceiling and some serious pro tools to work with.

At 6’6”, Charlton looks more like a tight end than a defensive end, but with his long arms and impressive lower body athleticism, the three-time letterman at Michigan became a serious pass rushing threat under the watchful eye of Jim Harbaugh and defensive line coach Greg Mattison.

If you recall, Mattison was the defensive line coach at Notre Dame when Justin Tuck was there. Charlton compares favorably to Tuck early in his career.

That being said though, Charlton is still extremely raw despite playing in 46 career games at Michigan (15 starts). Although a serious problem as a pass rusher, Chartlon really struggled against the run through his career due to his inability to consistently get off blocks to make stops, along with his tendency to guess on plays, putting him out of position to make a play.

However, when Charlton is locked in against the run, he flashes in a big way and shows just how good of an athlete he is.

Right at the snap Charlton is able to get penetration up the field to blow up the jet sweep for Ohio State’s Curtis Samuel, who is an explosive athlete in his own right.

By getting up the field quickly against the run, Charlton is able to beat the blocker and then make the big stop in space against a jitterbug.

He moves well laterally thanks to his lower body athleticism, which comes in handy here against Samuel.

There are times though where he just gets washed out against the run, which shows me that he needs to add some muscle to his lower body to be able to hold up against the run in the NFL.

On top of that, he has to do a better job of disengaging from his blocker to find the football and make the stop. There are times where he does a great job of stacking up the blocker, stringing out the run while setting the edge, but when he’s in position to make the stop he simply can’t get off the block.

He’s a major work in progress as a run defender, but if his four years at Michigan are any indication, he’ll get better and better as he matures.

As a pass rusher though, the tools are clearly there, it’s all about honing in on what he does best and making that nearly unstoppable.

Despite having an inconsistent get-off, Charlton chews up a lot of ground off the ball thanks to his long strides, which puts him in an advantageous position against most offensive tackles.

This past season against Wisconsin’s Ryan Ramczyk and Florida State’s Roderick Johnson, two potential first-round draft picks, Charlton really displayed his superior speed and athleticism on the edge, but when the offensive tackles were able to adjust to that, he had limited success turning the corner.

On tape, it appears as though Charlton doesn’t have a plan when rushing the passer. He has a quick spin move, but he doesn’t really have a clue as to how to set it up, which makes it easy for tackles to block it.

That’s against Ramczyk, who has just one year of experience as a starter in the Power 5, yet he’s able to handle Charlton’s move relatively easy.

If Taco could learn how to set up his spin move with his speed, athleticism and improved hand usage at the point of attack, he’d be nearly unblockable. That though alone has me pondering just how great he can be at the next level.

Even when he has to lean heavily on his speed and athleticism around the edge, he often gets great results.

This past season against Ohio State on the road late in the year, Charlton simply dominated the second half for the Wolverines, constantly putting pressure on J.T. Barrett.

While he’s incredibly tall, Charlton is able to explode off the ball, keeping his pads low while dipping and ripping under the Ohio State right tackle’s attempted block.

Once he pulls off the dip and rip, you can see the elite athleticism to bend around the edge and finish off the play.

When not getting a great jump off the ball, Charlton has flashed the ability to convert speed to power, but that seemed to sort of disappear from his game in 2016.

Once he realizes he can’t beat the tackle around the edge, Charlton is determined to just bull through him, pushing the tackle in the quarterback’s lap, leading to a QB hit for the Michigan product.

By staying low and locking out against the tackle, Charlton is able to control the Northwestern tackle, putting him on skates into the backfield.

Overall, Charlton should have teams excited about his ability to rush the passer with surprising consistency despite a limited arsenal of moves. But by seeing what he does on tape it’s clear he’s a very moldable rusher that has some very impressive tools to work with moving forward.

That being said though, the area that could really hold him back from his vast potential is his struggles against the run. If he can figure that area out at a consistent level, he’ll be an every-down player in the NFL that should make multiple trips to Pro Bowls.