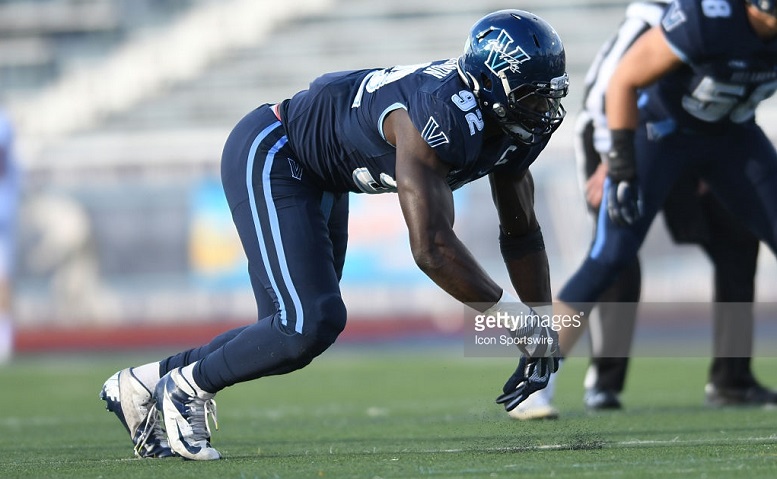 – Shoots up his arms immediately and can anchor the point of attack
– Big, powerful upper body
– Explosive first step
– Uses multiple pass rushing techniques: spins, swims, dips, and bull rush
– Lines up in a four point stance that looks like he is coming out of a sprinter’s blocks
– Good motor
– Can play seven, five, or three tech, but is a more natural five tech in the NFL

– Other than the University of Pittsburgh, who did he play against?
– Loses track of pigskin when spinning away from blockers
– Conditioning a concern, was huffing and puffing like Clubber Lang vs. Rocky
– Stood up tall out his stance too quickly which took him off balance
– Seems to rely a lot on his upper body strength and not enough trunk power
– Raw, so might take time to coach up
– Older for rookie, will be 23 years old in June

Kpassagnon stands up almost immediately out of his stance which allows the offensive tackle into his body. This makes for an easy seal with the ball carrier running to the other side of the field.

The defender gets aggressive off the snap, pushes the offensive tackle back, but by doing that creates a running lanes for the back to exploit underneath. His teammates pick up his slack making the tackle for minimum gain; unfortunately that has nothing to do with his play.

He demonstrates an explosive first step, dips underneath the tackle, then flips his hips. This forces #72, the tackle, to either hold the Wildcat defender or allow the sack. #72 chose the hold and the referee made the call.

Kpassagnon looks like he is flying out of sprinter’s blocks, screaming across the line of scrimmage, slips and dips poor #72 again, and then wraps up the signal caller bringing him to the ground.

The Wildcat defensive end is lined up in seven tech and explodes into the over-matched tackle knocking #72 on his heels. Kpassagnon sees the back running up the gut, closes the gap, and smashes the ball carrier high.

Kpassagnon is a freakishly athletic, yet raw defender that is climbing up the draftnik charts. It’s a bit harder to tell what front offices like the Steelers think of this work in progress. He has some pass rushing moves, but hasn’t perfected any of them. His upper body is well developed, but his trunk doesn’t seem to have the matching power. This former Wildcat could develop into an NFL starter within a year or two, but keep in mind he will turn 23 in June. Big risk, big reward player that might go earlier in the draft than expected, I’m just not sure he is worth a significant investment.