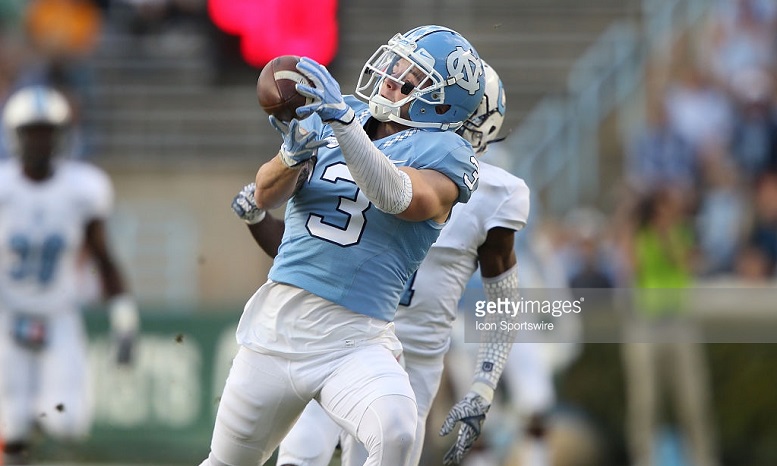 – Great attitude and extremely hard worker; finishes plays strongly
– Great route-runner
– Showed toughness when making receptions across the middle
– Nearly uncoverable on out-routes
– Very reliable hands
– Consistently found soft spots in zone coverages
– Excellent change of direction ability, very smooth in and out of breaks, and does a good job of varying speed during his routes
– Navigates traffic well and can fight through reroutes
– Great Punt-Returner

– Small build, with (seemingly) small wingspan; fairly limited catch-radius
– Lacks elite speed
– Ran a limited route-tree, not a deep vertical threat
– Average acceleration and jumping ability
– Slightly injury-prone (although he didn’t miss many games, he seemed to get beat up during games)
– Tended to be a “body-catcher,” needs to use his hands to secure receptions more consistently

At best, Ryan Switzer will be selected late on Day 3 of the NFL Draft. However, despite his low projection, he is a quality player who has the work ethic and toughness to contribute to an NFL team. He makes up for his small stature by running crisp routes, and he makes up for his lack of elite speed with great lateral quickness. As a result, he has the potential to be a valuable late-round sleeper who has the capability to succeed on Sundays.

In this first clip, Switzer showcases both great route-running ability and explosiveness out of his cuts. Specifically, he is running an Out-route from the slot against man coverage. He begins by stemming hard to the inside; forcing the defender to completely turn his hips to keep up. Next he squares his head/shoulders up-field, before making a sharp, square break to the outside. Notice the separation he creates, even with a borderline-hold by the defender. Finally, he does an excellent job of snapping his head back to the quarterback and running flat down the line, which prevents the trailing defender from recovering. Overall, great ankle-breaking route that wins the one-on-one matchup:

Next, Switzer demonstrates his playmaking potential by turning a routine bubble-screen into a huge gain. Although he does not have blazing speed, his sharp cuts and great vision make him very dangerous in the open field. For example, after he secures this catch against Pitt, he does a great job of patiently setting up and using his receiver’s block. He angles his path towards the receiver’s inside shoulder and keeps his head/eyes inside, before bouncing to the sideline at the last moment. Once he has cleared the block, Switzer sets up a devastating juke by subtly decelerating and balancing his body before making his cut. His small change of speed before the juke causes the pursuing defender to slightly change his angle and become off-balanced. Switzer takes advantage of the misstep and picks up nearly 20 additional yards:

These final two clips illustrate Switzer’s scrappy toughness. First against Pitt, he makes a difficult reception, despite taking a huge hit when leaping across the middle of the field. He calmly plucks the ball out of the air and quickly secures it to his body before the defender can jar it loose. His unflinching courage in situations like this will be hugely beneficial in the NFL:

Lastly, although Switzer is not the best blocking receiver in this year’s draft, he is definitely not afraid to mix it up with guys much bigger than himself when he has to. Arguably his single best attribute is deep desire to win every play, regardless of his assignment. He works extremely hard and rarely (if ever) took plays off. While this final clip is not flashy, I think it exemplifies his willingness to do whatever it takes to get the job done. Scrappy blocks like this one, although not textbook by any means, indicate a great football mentality:

Overall, Ryan Switzer is an underrated prospect, but who nevertheless really stands out on film. There is an obvious intensity about his game that allows him to outperform his physical limitations. His precise route-running, dependability in pressure situations, and his overall intelligence made him QB Mitch Trubisky’s favorite, go-to target. As a result, despite the future challenges he will face while adapting to the aggressive nature of professional football, he is a high upside player who could be a Day 3 steal.