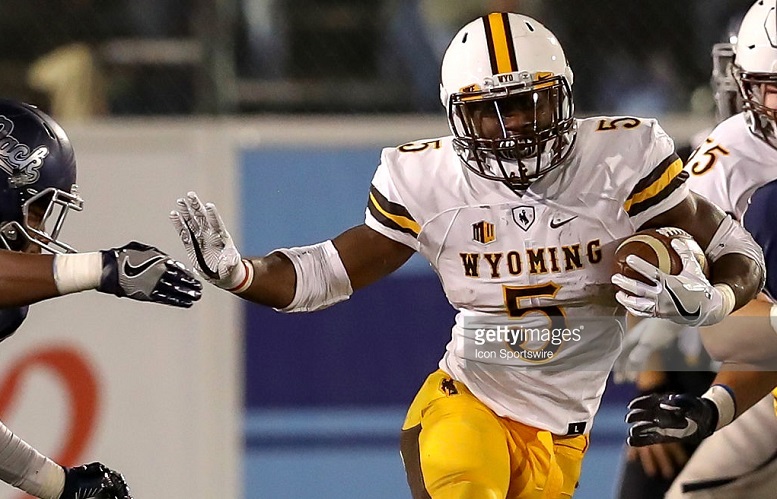 The more film I consume on Wyoming’s Brian Hill, the more I take a liking to the running back’s game. A well-rounded running back, Hill is a stout downhill runner who became one of the most productive runners that Wyoming has ever seen.

Hill’s production comes from the running back’s great vision and balance. A quick decision maker, Hill channels his way through blockers to consistently pick up tough yardage. Watch below as Hill follows his blocks and moves through the New Mexico defense picking up the first down and more.

As Hill makes his way past the line of scrimmage, he is able to quickly process the three defenders awaiting him to the outside and runs through an inlet to the inside.

Being over six feet and 210-pounds, Hill also carries a variety of power moves that he can use to get tough yardage. Hill does not avoid contact and will drive through defenders in the open field. If you do not believe me, just ask the poor Colorado State defender who got in Hill’s path.

Could Hill have gained more yardage there by turning up the sideline instead of into contact? Perhaps yes, but for argument’s sake, this was the most impressive display of Hill’s strength and power at the second level. Hill’s open field power does go hand in hand with his power at the line of scrimmage as Hill can push the pile forward.

When he’s not pushing the pile forward, Hill can get through tight holes by squeezing his large frame through. The ability to get skinny is an important trait for Hill to possess, as the competition in the NFL will certainly exceed the defensive line play he saw in the Mountain West Conference.

Besides the obvious squeeze demonstrated on the play, Hill’s play as he bounces outside caught my eye as well. With no real second gear, Hill uses his hands to slap away the defensive back’s tackle attempt, giving him the few extra steps he needed to score on the play. Hill will have to use any advantage he can get when he hits the outside in the NFL, a big reason why his stiff arm is so important.

The poor Washington State defender pictured above joins the Colorado State defender as players who have felt the wrath of running into Hill at the second level. If Hill can do more of the same in the NFL, it may not matter that he is not the fastest player on the perimeter.

But now that Hill’s running style has been dissected, it is time for the moment of truth, the question that everyone has had on their mind. Can Hill pass protect? Well, it is with pleasure that I inform you that Hill can indeed pass protect, in fact he can do it quite well. In my time viewing Hill’s game tapes, I believe I counted one instance of a missed assignment resulting in a sack. Hill anchors well, and for the exception of one instance is very quick at picking up incoming pass rushers. 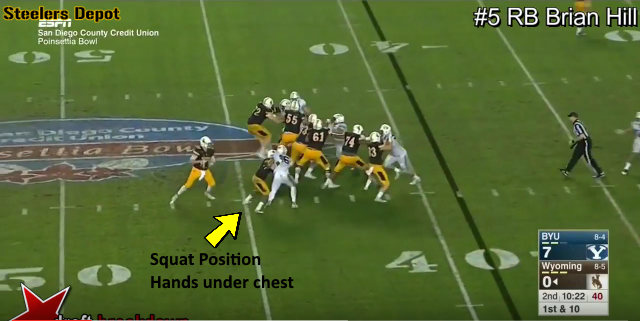 Hill has the pass blocking fundamentals down to a tee. Squat position, hands at the correct pad level and extend. Out of all the running backs that I have currently watched, Hill is perhaps the most consistent at executing his duties in pass protection.

Though Hill runs a little too upright for my liking, the running back does have the making to be a quality back in the NFL. The Wyoming product has the vision and intangibles that many teams will want to add to their roster. Hill may never be a face of the franchise type back but being a serviceable starter is not out of the question.

Games Watched: vs BYU, vs Nebraska, vs Washington State (2015), vs San Diego State, vs New Mexico