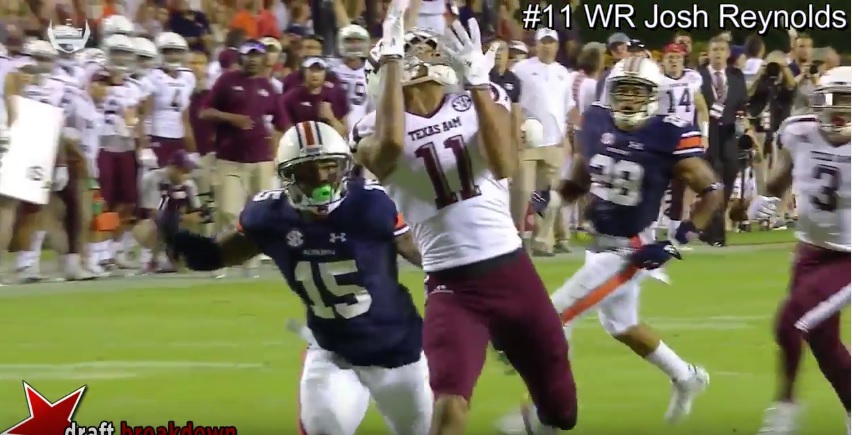 – Tall, lanky frame with ability to add bulk/muscle
– Vertical threat, long strider with build-up speed
– Ability to track the football over his shoulder while maintaining speed
– Shows ability to make difficult catches away from framework of his body
– High points the football and fights for the ball in the air, red zone threat
– Surprising YAC/RAC ability, quick to the tuck and shows acceleration and ability to get upfield
– High cut but shows ability to sink his hips and is relatively quick out of his breaks on underneath routes (curls) and doesn’t drift on breaking routes (outs/slants)
– Gives effort as a run blocker, uses size to his advantage, and doesn’t look to take plays off
– High level of production and a big playmaker in college

– Think frame, has to grow into his body, small hands and underwhelming wingspan (8 7/8, 77 inches)
– Hands are inconsistent, seems to lose focus, and catch ones he absolutely should make
– Has to get stronger to beating press coverage, gets beat up at the line, and needs to be more decisive physical coming off the line
– Takes false steps vs press coverage, too much wasted motion and delayed getting off the line
– Slows down to change direction in initial part of his stem (releasing inside and then working back out), shows some stiffness in subtle movements
– Needs to do better job running away from defenders and settling in zone coverage, getting in QB’s cone of vision in scramble drills

It’s easy to spot flaws in Reynolds’ game and like we do with everyone else, we will talk about those. But big picture, he fits well into the mold of a Steelers’ receiver. Big. Fast. Playmaker. Teeming with upside. Let’s show you what I mean.

He has the ability to make some ridiculous catches with his big frame. His hands aren’t always but they are good for some highlight-reel catches, like this one-handed snag behind his back.

As his number suggest, averaging 17+ yards per catch the last two years and exactly 17 in his career, he’s a vertical threat. He’s not going to be a low 4.4 guy but he’s a long strider and builds up speed. He isn’t slow either and I think he can be in that 4.48-4.50 range. Reynolds shows a strong ability to track the football downfield while keeping his speed and of course, his size allows him to win 50/50 balls.

As I wrote in the “Good” section, he’s a relatively fluid player when trying to break down on underneath routes. Doesn’t drift on his routes and gets out of his breaks quicker than I expected for a tall, high-cut receiver.

On the negative, yes, his hands can be an issue. He is a hands catcher, he doesn’t allow many into his body, but he just struggles with his technique and focus. Too many go through his hands.

And he has to work on getting off press. Both in size/physicality, he can get beat up by press coverage, and in his footwork, too slow, too clunky, and too much wasted motion getting off the line. Watch him at the top of the screen here. Gets off the line but as he tries to stem inside he’s very slow and deliberate changing directions. That’s going to wreck the timing of throws at the next level, especially since he’s still trying to push vertical and really isn’t being jammed.

It may be a little tough to see here because they are pictures, wanted to cut down on GIFs, but check out Reynolds’ front foot for a true false step. Off the line, his front foot kicks back and then he takes off. Wasted step and in the NFL, every half-second and step is valuable time and ground wasted. 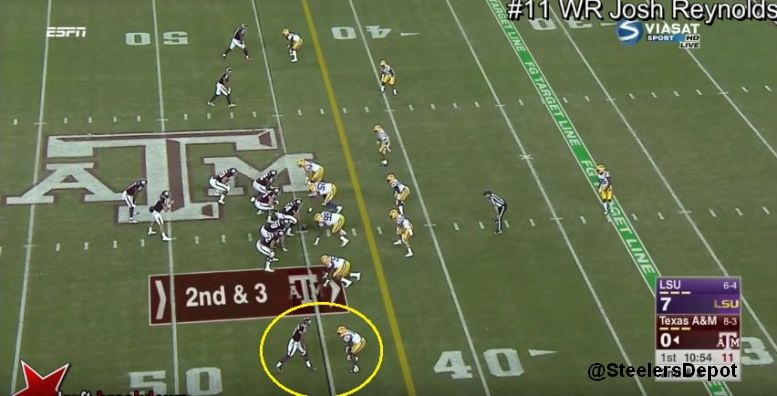 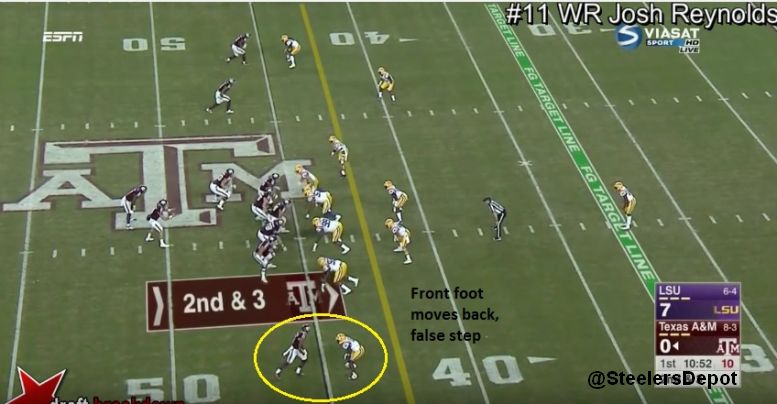 Reynolds feels like a perfect Steelers’ selection. The height, speed, playmaking ability. He is raw and has to add to his frame and get better versus press but I don’t envision the team needing him to help right away nor does his draft slot suggest so. Even if he goes to the practice squad for a year, he can work on his game and be ready to make an impact in 2018, especially if the team still has question marks about their #2 receiver, which would prompt a change and new direction.

Guy I’d love to see Richard Mann get his hands on.