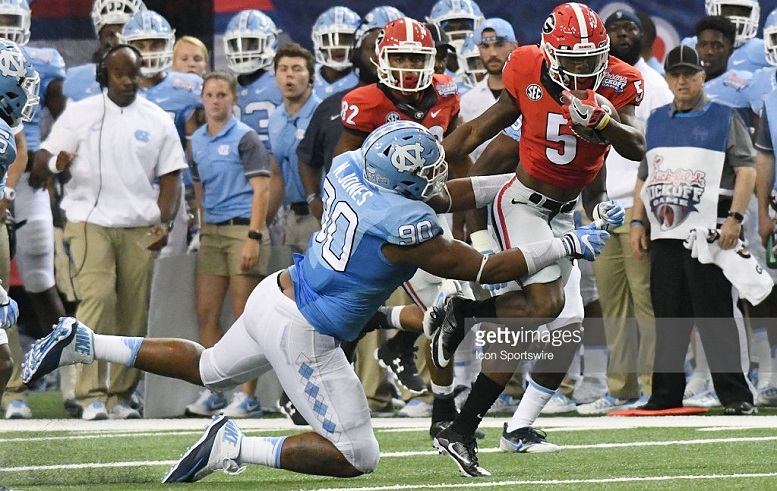 – Outstanding strength and power with a big trunk
– Forces double teams
– Huge reach with his big wingspan
– Gets arms and body up to swat down passes
– Natural anchoring five tech, who can play three tech when needed
– Good initial first step
– Above average tackle production for an interior lineman of his size

– Started his own non-profit foundation MADE Men Mentoring to that pairs college athletes with underprivileged young men in North Carolina
– Finished with 72 career solo tackles, 74 assists, 22 tackles for loss, 5 sacks, 3 forced fumbles, 3 fumble recoveries, 10 pass deflections, and 2 interception returns for 20 yards
– Listens to stand-up comedy and watches 2000s urban music videos to get ready on game day
– Wears #90 because Julius Peppers wore it first
– Wants to play for his “local” team, the Carolina Panthers
– In high school, suffered from a complex regional pain syndrome that caused him to lose his ability to walk and also lose 50 pounds in a month

“Naz” fires out low, but comes up out of his stance too quickly. By standing up, he loses all leverage and power. This causes the defender to get knocked back and bounced around like a pinball. RB Dalvin Cook squirts right by him for a nice gain.

Jones gets great initial penetration. Creates separation between himself and the blockers with his extended arms, spins away from the offensive tackle, dips his head and brings down QB Nathan Peterman to prevent a first down.

“Zaz” has a good first step off the snap, uses his arms well to keep both the guard and tackle off his body. The defender rolls outside matching a bootlegging Brad Kaaya and gives the QB a shot as he releases the pigskin.

Jones is a big, powerful defender who fights through double teams with extended arms not allowing blockers into his body, anchors well, and seems attract ball carriers to him. He usually gets a quick first step, but has times where the defender cannot find the pigskin. The former Tar Heel is not much of a sack player, instead he relies on knocking down passes with his long arms. “Naz” could be a solid backup defensive end giving Tuitt and Heyward more breathers without losing much on the front line for a reasonable cost, especially with the extra third round pick.

Games Watched: vs. Georgia, vs. Pittsburgh, at Miami, at Florida State