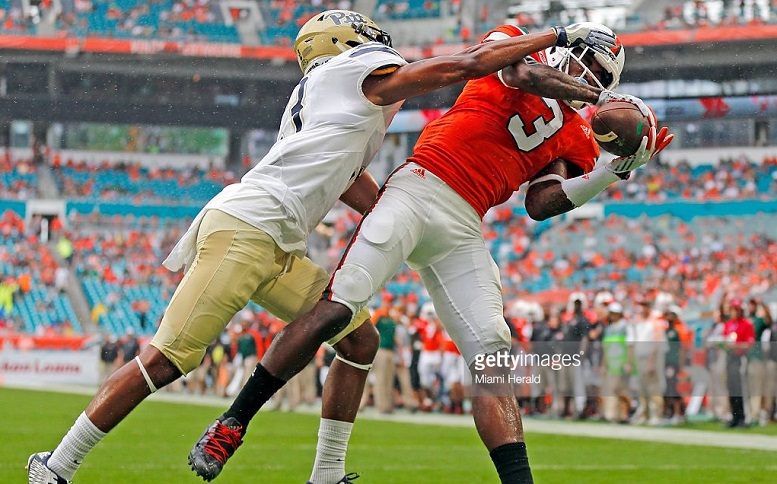 – Smooth route-runner with good speed/acceleration
– Generally, he has reliable hands, (though he needs to improve his consistency on passes that are off-target but still within his catch radius)
– Good open-field runner and can make the first defender miss
– Has a good release and can avoid being rerouted
– Very experienced player: played 4 seasons at Miami and appeared in 48 career games

– Very poor blocker and was regularly called for holding penalties
– As mentioned above, he was inconsistent in catching off-target passes
– Lacks shiftiness when running his routes, he rarely attempted to deceive defenders with head/eye movements or body fakes. Instead, he typically jumped directing into his routes by using a simple, vertical stem
– Typically runs his routes at one speed, which allowed defenders to remain balanced in their coverage
– Often rounded his breaks and was slow to snap his head to the QB, particularly on out-routes

While Stacy Coley is a solid receiver who doesn’t have many glaring flaws in his game, his NFL potential appears to be limited because he does not excel in any particular area. He had respectable production at Miami and was one of Brad Kaaya’s favorite targets, but he never developed into a genuine receiving threat or game-breaking player. As a result, I think he may have a difficult time transitioning to the next level.

On the positive side, Coley demonstrated that he has a smooth release and is comfortable avoiding reroutes. For example, in this first clip against Virginia, he does a great job of using his hands to fight through the linebacker’s disruption. He is aggressive at the point of contact and quickly snaps his head to the quarterback once he gets open.  His strong core and hand fighting skills will definitely help him when competing against the more physical NFL defensive backs:

Additionally, Coley’s speed will also benefit him at the next level. He ran a 4.45 40-yard dash at the combine and he frequently used this speed to exploit coverage mismatches on both verticals and crossing routes. For example, here against Florida State, he uses his quickness to burn past the slower Seminole safety on a fade-pattern for a go-ahead touchdown:

As previously mentioned, there aren’t ton of major flaws in Coley’s game; however, one reason he may struggle in the NFL is because his route running lacks the subtle movements and tactical precision that is often required to get open. He rarely stems his routes, utilizes head fakes, or varies his speed when running his patterns, which will make it more difficult to gain separation at the next level. This clip against Duke is an example of a play that worked for Coley in college, but may not have the same result in the NFL. Specifically, notice how he rounds his break and is slow to snap his head back to the QB. Moreover, although he does a decent job of eating up the DB’s cushion, Coley could have put more stress on the coverage by stemming his route harder to the inside. These nuanced maneuvers are essential for consistent NFL production and something he must master to be successful. (Coley is the receiver at the top of the screen):

Lastly, Coley’s blocking is the biggest area that needs improvement. He was a complete liability as a blocker in the screen game and often hindered big-play opportunities because he couldn’t maintain downfield blocks. Additionally, he was also frequently flagged for holding penalties, which can obviously cause an entire drive to stall. This clip against Georgia Tech is just a singular example of his reoccurring weakness:

Overall, Stacy Coley has a long way to go before he’s ready to be a consistent contributor to an NFL team. He does many of the fundamentals well; however, he must become more nuanced and sophisticated in both his technique and understanding of the game in order to have future success. His speed, as well as his comfort in avoiding reroutes, give professional coaches a good foundation to begin to develop his talent, but it will likely take some time before he is truly ready.