– Impressive triangle numbers, classic height/weight/speed type player
– Vertical threat, long strider and build-up speed type but shows an impressive top speed
– Big play threat and numbers reflect it
– Finds the football vertically and capable of adjusting to the arc of the ball during his route
– Size makes it difficult for him to be brought down by smaller defensive backs, fights hard for extra yardage
– Shows adequate ability to drop hips and break down underneath
– High effort guy as a blocker, throws his weight around, and appears to take pride in that aspect of the game
– Upside and game is far from refined, plenty of room to grow, only a junior
– Strong final season, put up impressive stats

– Struggles vs press coverage, seems indecisive and doesn’t use hands well enough to beat press, too much wasted time and motion
– Generally a one trick pony, will disappear from games when he can’t get involved vertically
– Didn’t always dominate the way his tools would suggest
– Struggles to sell vertically on underneath routes, turns his head before breaking down and gives away route with his eyes, making it easy for CBs to read and react to the ball
– Route running is unrefined and primarily a vertical threat, doesn’t see a lot of success on routes outside of those
– Only one year of serious production

Coming off the Combine, Josh Malone was one of the guys I wanted circle back to after an impressive workout. Unfortunately, the tape doesn’t get me as excited as those numbers.

There’s no doubt Malone is a vertical threat. He’s a build-up speed receiver who has a high top end. The numbers and tape suggest a guy who can fly. Was quiet for most of the game against Nebraska until he busted out for a 60 yard touchdown on this skinny post.

He has size and some YAC ability at his size, especially once he gets up to speed. Able to run through arm tackles and smaller defensive backs. And he’s young, just a junior, and his game definitely isn’t refined. You have to know what you’re getting; he’s not a Day one guy. He’s a project through and through.

What makes him that? His route tree isn’t well rounded. You don’t have to run every route great, only a few receivers can do that, especially bigger and typically stiffer guys, but Malone is basically strictly a vertical threat.

He can break down underneath a little better than I expected but his technique leaves a lot to be desired. Watch him tip off this curl early, turning his head before he starts to chop his feet. 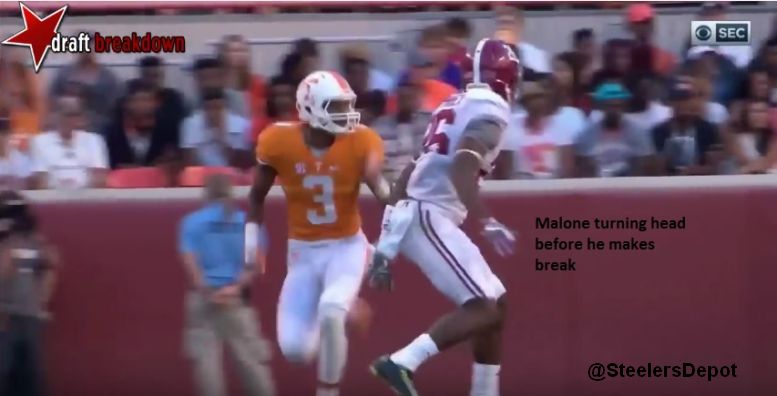 When he didn’t create the big play over the top, he was quiet, and uninvolved in the Vols’ offense. Other receivers were more impactful on a down-to-down basis than Malone. That’s a concern.

Like I wrote, you have to understand who this guy is and how he wins. Can’t expect much of a contribution in Year One. There is some intrigue just because not every big guy can run fast but I left the evaluation feeling a little disappointed from what I’d hope to find.

Games Watched: vs Alabama, vs Tennessee Tech, at South Carolina, vs Nebraska