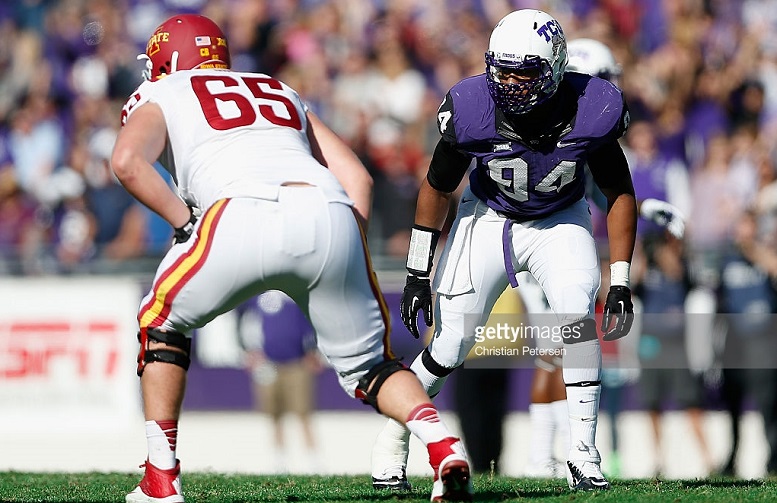 TCU’s Josh Carraway really is an interesting prospect compared to most edge rushers, relying on finesse and speed more than power and toughness.  Now that’s not saying Carraway lacks toughness, just that it is not a focal point of his game. Instead, what works for Carraway is his speed around the edge and athleticism, two tools that the TCU linebacker uses quite well.

To get a sense of Carraway’s speed for yourself, I ask that you turn your attention to the play below. Watch Carraway, lined up as a 5-technique end, waits for the right moment before accelerating towards Oklahoma quarterback Baker Mayfield.

Like a predator stalking its prey, Carraway measures up the perfect opportunity to attack. As the Oklahoma right tackle gets wrapped up in the scuffle, Carraway has a clear path to Mayfield and with great closing speed it does not take the TCU pass rusher long to reach his target.

So Carraway can get to the quarterback unblocked, great but can he do the same when matched up against an offensive lineman. Well yes, Carraway also has the ability to use his speed to beat bigger offensive tackles to cause havoc in the pocket.

Great burst off the snap and bend around the edge displayed by Carraway there. Carraway’s path to the quarterback was one of the smoothest I have seen and with his great first step, there was little doubt in my mind that Carraway would notch a sack on the play. But now as impressed as I was initially, I was even more impressed when watching the sack from a different perspective.

Carraway’s body control is off the charts. Calling this sack a product of great speed and initial first step is selling it short. The total masterpiece is a combination of the prior and flexibility to dip under the tackle’s reach. And as if that was not enough, Carraway’s use of 34 ¼” arms to secure the sack closes the deal.

But what holds Carraway back from greater glory may be his lack of engagement and grit, especially when it comes to the running game. Many times while watching Carraway’s film, I was left dumb founded, wondering what Carraway was thinking on a number of plays. Carraway spends more than his fair share of plays watching, almost trying to diagnose a play rather than attack it. Here is one example against Arkansas where Carraway seems more content with trying to watch the backfield instead of trying to engage with his blocker.

I like to think of Carraway as less of an instinctive player and more of a read and react type player. Instead of anticipating a play, Carraway has a habit of letting the opponent make the first move and then reacting to that.

Against Texas, Carraway (right side of the line) falls victim to his read and react style once again. As the ball is snapped Carraway does not engage once again except this time he finds in position to make a play on Texas running back D’Onta Foreman. But as you would expect, Carraway not only falls short of the tackle but falls flat on his face.

The truth about Carraway is that he is essentially a non-factor in the running game, lacking the physicality required for the duty. Unless a drastic change occurs, the TCU linebacker’s ceiling is likely a situational pass rusher whose speed could be a valuable weapon on passing downs. At the moment a one-trick pony who is a liability against the run, I do not figure the Pittsburgh Steelers will have much interest in Carraway, which seems probable due to the fact that he was one of the few edge rushers the team did not meet with at the NFL Combine. But as a pass rusher with high athleticism and good measurables, a team will likely take a flier on developing Carraway in the early rounds of Day 3.

Games Watched: vs Arkansas, vs Oklahoma, vs Texas, vs Georgia