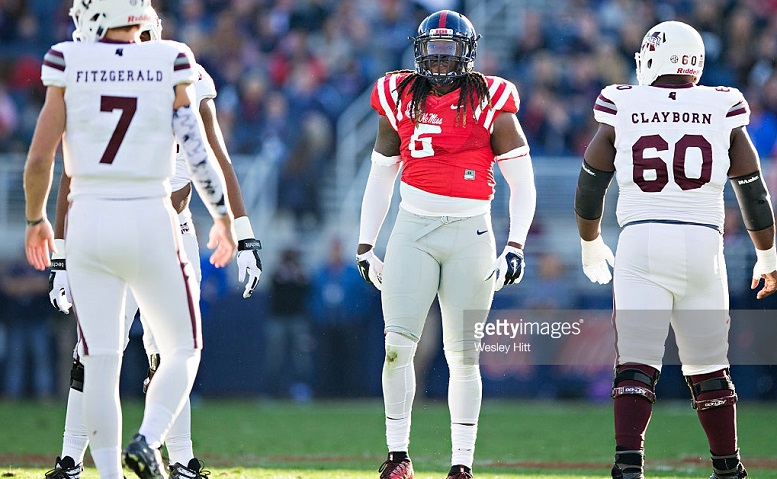 – Shoots his arms up immediately to keep blockers off his body.
– Gets his arms up to try to knock down passes when he can’t get to quarterback.
– Forces some double teams and holds his own.
– Can flip sides of formation (makes a good backup for both DE spots)
– Gets good initial pressure off the snap.
– Has the ability to anchor.
– Shows off a good motor.

– Not much of a pass rusher with only four sacks at Ole Miss.
– Stands straight-up too often, which causes him to lose power in his hips and get off-balance.
– Isn’t very flexible and has to gear down to change directions.
– Gets over-aggressive, then gets washed out of the play because of it.
– Not overly athletic.

– Originally signed with FIU as a freshman, the coach that recruited him was fired so Brown decided to transfer and had to sit out 2013 per NCAA rules.
– Finished with 51 career solo tackles, 38 assists, 16 tackles for loss, and 4 sacks in three years with Ole Miss.
– Two-year starter.
– Broke his foot in spring practices his senior season missing 4 games, only started 4 games, but played in 8 games total.

Brown flies across the line of scrimmage out of control, the tight end blocks down to pick the defender up. His over-pursuit opens up a running lane that allows Leonard Fournette to run almost untouched 65 yards to paydirt. Perhaps if he would have just anchored his spot, the play would not have been as successful.

The defensive end moves across the line quickly with his arms fully extended. This puts the blockers on their heals and allows the Rebel defender to gain the necessary leverage against them. Brown uses a spin move towards the signal caller and barely misses him.

Here is one of his best plays. Brown gets good initial pressure, shoves the offensive tackle away, stands his ground and forces the runner back inside. The defensive end dives at the back’s feet, helping him bring down the Tiger down for a minimal gain.

The defender fires across the line of scrimmage, rushing inside. He is picked up by the running back, gets away, but over pursues and doesn’t have the hip flexibility to change directions. This gives the bootlegging quarterback a clean passing lane to complete a first down.

Brown, when disciplined, uses good leverage and upper body strength to help get across the line of scrimmage quickly. He can anchor and force plays inside when the defender gets low, but has problems maintaining his balance once he gets high. His pass rushing moves are quite under developed which limits his ability to create pressure and is not an athletic marvel. Perhaps with a more developed lower body and better balance, Brown can become a backup NFL caliber defensive end.

Projection: 6th or 7th round