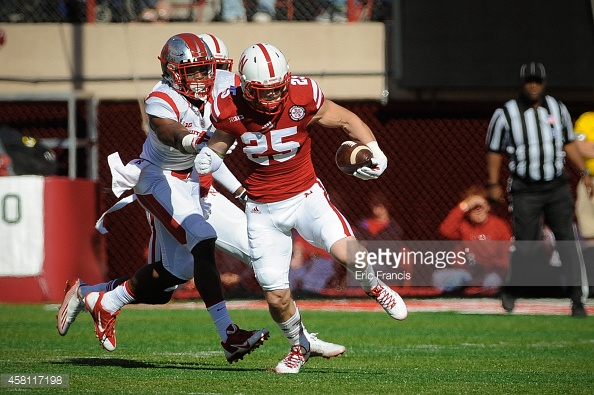 – Big, impactful hitter who throws his weight around as a tackler, pop on contact
– Plays with good technique as a tackler, consistently is the low-man, comes to balance, and drives through with his lower half
– Takes good angles to the ball in run and pass, helps mask athletic deficiency
– Tracks the ball well in coverage and shows good ball skills
– Size to match up against tight ends in man coverage and isn’t as easily boxed out as smaller safeties or linebackers
– Versatile player who moved around the defense, capable playing the deep half Cover 2, in the box, or matched up on tight ends
– Tons of starting experience
– Solid production during senior season and throughout career, highly decorated player
– Seemingly strong character

– Limited athletically, will get exposed in space, won’t be a single high safety
– Has trouble sideline-to-sideline reaching spot even with angle, causes missed tackles, and long speed is below average
– Schemes difficult to always discern but seems late to read keys vs the run, out of position more than you’d like to see, and has to get more width in flat when buzzing down as a safety
– Bit of a tweener and will have to create a use for him, likely not an every down defender even in best-case scenario

Gerry fits the mold of one of several potential hybrid players in the NFL. Playing closer to the line of scrimmage would be a trip back to his roots. He began his Nebraska career as a woefully-light linebacker before the team wised up and moved him to the secondary. Now, he’s likely to shuttle down and play close to the line or at least, a pure box safety/Patrick Chung type.

He’s a big hitter who plays under control and with technique. Watch him fill the alley before the back can pop out the other side, be the low man on this back, snap his hips and drive through to stop the back in his tracks.

Here, he reads this zone read, comes downhill quickly, and makes the tackle behind the line. That’s what you get with Gerry.

But if he wants to be that hybrid player, he’s going to have to cover the intermediate routes. Against Minnesota, he bumps the Y tight end at the top of the route, disrupts it, and then drives underneath to contest the throw and force it wide. 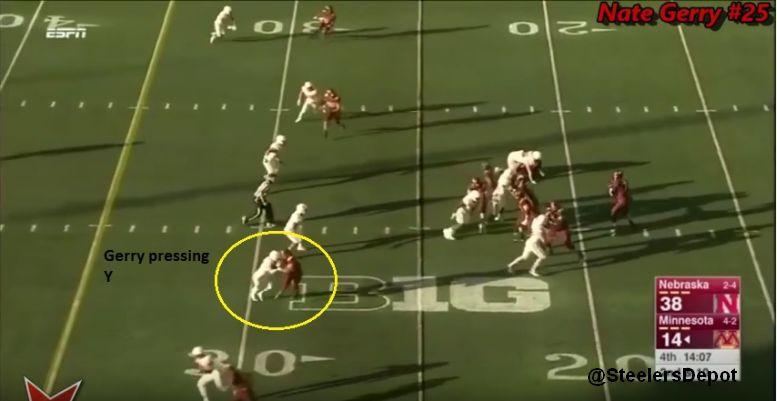 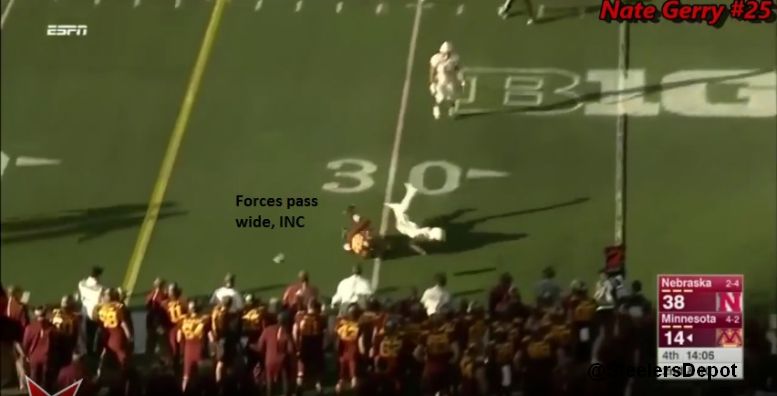 The downsides? Predictably, he’s not a terrific athlete and probably not as strong as his decent 40 time (4.58/1.62) and sprinter’s background suggests, though the latter is super interesting to me. Even though he generally takes good angles to the football, that lack of foot speed can make it tough for him to get to his spot in time. Corey Clement stiff-arms him into the ground.

Setting aside the standard “white guy scouting report” vibe going on here, one other area he may struggle – or something I at least have questions about – is his ability to read his keys. May be a little late diagnosing the scheme, unusual for a senior with so much starting experience, but again, I preface with obviously not having a good feeling for the Cornhuskers’ defense. It’s tough enough to evaluate the Steelers’ defense, let alone anyone else’s.

Watch this G Lead run and judge for yourself. I don’t think he’s the force defender and maybe he’s playing his gap to the outside shoulder of the guard. But he’s taking his eyes off the back/ball and that’s a concern.

He’s certainly not someone on the caliber of Obi Melifonwu, nowhere near as athletic, but he doesn’t come with that hefty price tag either. I like that Gerry has made splash plays in his career, something Jabrill Peppers failed to do. He’s going to be that hybrid type linebacker, and that’s how teams are viewing him, limiting his snap count but at an emerging position.

I compare him very much so to the Kansas City Chiefs’ Daniel Sorensen, who posted similar numbers coming out of BYU in 2014. Someone to watch for on day three for the Steelers.

Games Watched: vs Oregon, at Minnesota, at Wisconsin