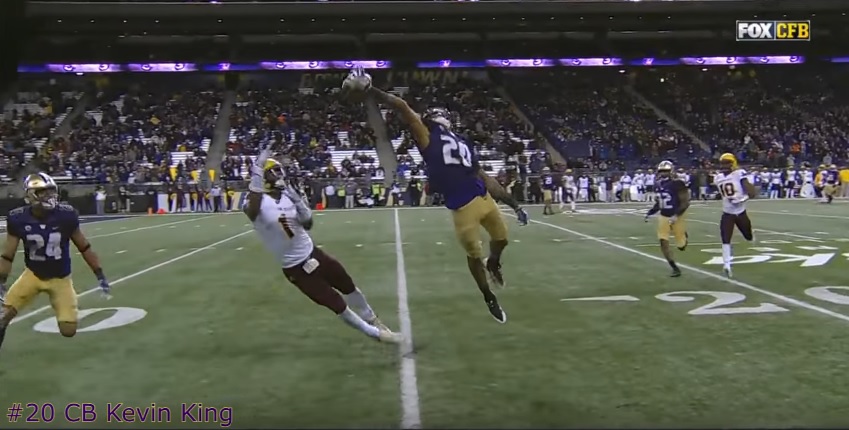 – Rare size with good length (32 inch arms)
– Uses size and length to his advantage, physical at the LOS and does excellent job with hand use to disrupt receivers off the line, won’t often be smaller than player he’s going up against
– Surprising fluidity in his turn out of pedal and has good feet moving backwards, thrives in man coverage
– Aggressive with the ball in the air and uses his length to play the pocket
– High effort player who chases the football in the run game
– Seems to embrace and shows desire to play the run
– Not just a press corner, experience in off man and bail technique
– Mixes up his plan of attack at the line of scrimmage, has subtle fakes with his hands to throw WR off and keep him guessing
– Put up elite numbers at the Combine
– Versatility, cornerback/safety experience

– Can be too aggressive with the ball in the air, lose track of the receiver, and struggles to play the pocket compete at catch points on throws downfield because he’s going for the big play
– Inconsistent tackler, gives effort but most do better job of coming to balance, too out of control and often aims too high or low
– Too often gets by and size and leads with his shoulder as a tackle, has to see what he hits
– Didn’t have gaudy production and accolades you’d expect for size and overall talent level
– Lacks a ton of time at cornerback

King might have been perched at the top of my list of guys I needed to check out following a spectacular Combine performance. Dude lit it up and arguably had the best tests of anyone, perhaps even ahead of Obi Melifonwu because King went through the shuttle drills.

Either way, he was a guy to be excited about, especially given the lack of depth at the position in Pittsburgh. Does his tape agree? I won’t leave you in suspense. Yes it does.

He’s a hyper athlete and it’s easy to forget the guy is a legit 6’3. He’s so smooth in his backpedal, shows no stiffness in his turn, and carries his weight really well.

But what you’re going to hear about him the most, and what you’re dying to know, is if his play lives up to his build. And it does. King’s length is a tiny bit disappointing at 32 inches but he plays big and physical at the line. Hand use is good a forceful punch that will definitely disrupt the timing of routes. At the top of the screen, watch him lock up this receiver.

He can make plays off that too. Aggressive player with great vision to the ball and ability to finish. Again, locks up the receiver in the red zone, finds the ball, and makes a sick one-handed catch. Best play of his you’ll see.

And that length pops up with the ball in the air and King trailing. He’s aggressive, a laser-like focus on the football, and uses his length to make plays even when he’s slightly out of position.

Yeah…that’s something not everyone can do. He and Artie Burns would disrupt a lot of catch points.

King’s reputation is a poor tackler and sure…he’s not great at it. He has to be more controlled, break down, and wrap up. You’ll see him miss in space on this screen and the play goes for a huge gainer.

But he shows effort, runs to the ball, and I think he’s interested in the run. So you can work with it, get him to buy in pretty easily, and I don’t see it as a huge concern long-term. Maybe some rough patches early on but not enough to detract me from drafting him.

King is the real deal and obviously, there are parallels between he and Burns. And King will check every box of what the Steelers look for and let’s be honest, what any team looks for. Maybe I was a little too strong coming off the Combine thinking he’d be in the top 20 but it’s hard not to imagine him going in the Top 40 of this year’s draft. Too much potential, too much athleticism, too many big plays.

Games Watched: at Boise State (2015), vs USC, vs Arizona State, vs Colorado