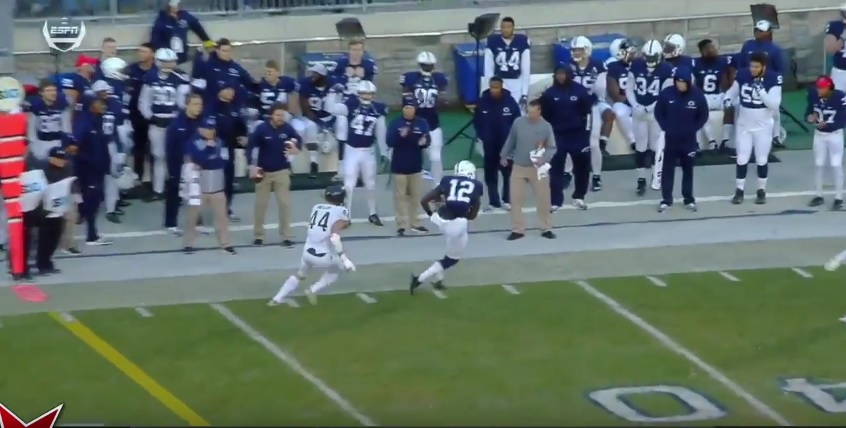 -Strong route runner with limited wasted movement in and out of breaks
-Good feel for working open in scramble drill; has knack for finding holes in coverage
-Powerful possession receiver that knows how to shield defenders away from the ball
-Willing blocker that packs a punch coming downhill
-Good vision and strong lower body in RAC situations
-Strong hands to clamp down on football in traffic
-Productive No. 1 receiver that received heavy attention
-Durable receiver that rarely comes off the field

-Struggles to win 50/50 balls in the air
-Rarely high-points football, allowing defenders to get back into plays
-Limited route tree; must expand that at the next level (most of that due to scheme though)
-Has to double catch the ball at times, which could be a concentration issue when the ball is in the air
-Needs to improve ability to beat the press; has a hitch in get-off that allows DBs to get hands on him at the line

-Tied for No. 4 on the career touchdown receptions chart with 18 scoring grabs in three seasons
-Eighth player in PSU history to eclipse 2,000 career-receiving yards
-Ranks No. 4 on the career receiving yards list with 2,404 yards
-No. 7 on the career receptions charts (153)
-Owns nine career 100-yard receiving games, with three in 2016, five coming in 2015 and the other coming against
Boston College in the 2014 New Era Pinstripe Bowl
-Has at least one catch in 38 of 40 career games, including a stretch of 19-straight games with from 2014-16
-Became just the third Penn State wide receiver (Bobby Engram, Allen Robinson) to eclipse the 1,000-yard mark in a single season, finishing second on the season receiving yards list with 1,101 yards

There’s a lot to like on film with Penn State receiver Chris Godwin, who had a stellar career with the Nittany Lions under James Franklin.

As a three-year starter, Godwin put up some impressive numbers with Penn State despite playing in a stale offense his first two years. But after the switch to Joe Morehouse this past season, the Penn State offense exploded, and so did Godwin, who became just the third receiver in school history to gain 1,000 yards in a single season.

The way that he did it was most impressive as he was used exclusively as a possession receiver that feasted around the middle of the field in a high-powered offense, allowing him to rack up yards and catches as the No. 1 receiver for the resurgent Lions.

As a very good route runner, Godwin was able to put himself in great position time after time to make plays in the middle of the field. By possessing the ability to run great routes, it allowed Morehouse to move the talented receiver all over the field, including out of slot.

Take this clip from 2015, a year before Morehouse came into the fold. Out of the slot, Godwin is able to create separation on the Michigan State linebacker thanks to great footwork at the top of his stem, along with the ability to get in and out of his break quickly, showing Christian Hackenberg his numbers.

After making the catch, Godwin showcases the ability to make some plays with the ball in his hands. That’s not an easy first down to pick up, especially with a guy like Michigan State’s Montae Nicholson flying downhill against you.

Need more examples of great route running from Godwin? I’ve got you covered with a few here.

This is a simple stop-and-go from Godwin, but the footwork at the top of his stem on the stop really sells it.

Look at the way he sinks his hips towards the ground, forcing the safety to think he’s actually running a stop route. Once he has the safety caught off guard, Godwin quickly flips his hips back in the other direction and gets back up to full speed, leading to an easy touchdown in a crucial game.

Later on in the game, Godwin strikes again against the Michigan State secondary.

This is a post route from Godwin, but his ability to chew up a ton of ground quickly on the corner sitting back on his heels leads to the score.

By chewing up so much ground to get right up on the corner quickly, Godwin is able to make a subtle move at the top of his route, wiping clear with his hands before running free into the secondary.

Despite being a great route runner, there are times where Godwin has to make the difficult catches in traffic with a defender all over him. More often than not, Godwin would wind up with the catch thanks to his ability to shield defenders away from the ball with his body while also possessing powerful hands to clamp down on the football for the tough catches.

According to NFL Network’s Matt Harmon, who came up through the football ranks on the back of his #ReceptionPerception formula for receivers, Godwin has the best contested catch rating of any receiver in the last two draft classes.

Not bad for an under the radar guy with very little hype compared to some of the top names of the last two years.

A big reason Godwin can make the contested catches is because of his tremendous hand-eye coordination as well.

Just look at some of the catches he made in the Rose Bowl against Southern California if you don’t believe me.

That being said though, he really struggles to high point the football, which allows defenders to get back into the play, forcing him to make some very tough catches.

But when looking at his combine numbers there’s no doubt that Godwin will improve in the jump-ball area at the next level, which should round out his game completely.

When not actively trying to catch the football, Godwin possesses a serious edge as a blocker and might be the top guy at his position in this class in that category.

I understand that this is a crack-back block on an unsuspecting linebacker, but that’s some serious pop from a receiver on a much bigger linebacker moving full speed downhill.

Although Godwin doesn’t land these types of blocks often, he’s very consistent in his ability to size up a defender, fit his block and stay locked on without drawing flags, which is key at the next level.

Plus, he seems very willing to stick his nose in there on running plays to try and spring a teammate, which is something you don’t always see from receivers in college, let alone the NFL. To most, it’s all about catching the football.

Not Godwin.  It’s all about the team success with this guy.

Overall, Godwin is a sneaky good receiver that likely improved his stock with a very impressive combine showing, but like always, it will come back to what he shows on tape, and what he shows is a consistent receiver that is durable and willing to do whatever is asked of him.

Godwin’s game reminds me a lot of Anquan Boldin in his prime. Not flashy, but very consistent and always able to come up with the big catches when his team needs him most.