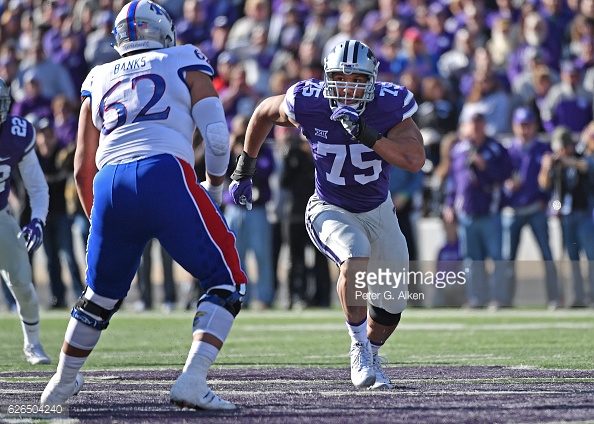 – Ideal size and length with big hands (33 1/2 and 9 7/8 respectively)
– Excellent hand placement, strong punch, and converts speed to power
– Able to string together multiple pass rush moves better than most
– Reads OTs well and counters off their set, has a pass rush plan and able to adjust in the moment
– Uses length really well and creates space as a pass rusher and against the run
– Tons of ways he wins (speed/bull, long-arm, rip, swim)
– Timed absurdly well at the Combine, checked every box
– Good IQ, vision to the football, and gets hands up in throwing lanes
– Great production in college career, been a success at every level/event
– Tons of starting experience

– Frustratingly inconsistent bend around the edge, bends off contact but struggles to show the same in space, tape doesn’t always match up with his numbers
– Average athlete and isn’t as fast as he tests
– Asked to one-gap a lot at college level, hard to gauge run defense at next level off ball
– Will have to stand up as a linebacker in the NFL, didn’t play with his hand up in college and very limited time dropping into coverage
– Runs to the ball if it’s on the same side of him but doesn’t show same level of effort when the ball is away

Want to find maybe the most controversial and divisive player in this draft? You’re looking at him. It’s hard to ignore all the success Jordan Willis has had in his career and the stacks of legitimately great tape in the league. But it’s just as easy to see the deficiencies in his game and the – and this is the most important part of the evaluation – difficult projection he may have trying to make the jump to the NFL.

But the good, as we always start with. Willis might have the best hand use and variety of ways to win as any edge rusher in this class. He has length, gets extension, and always punches into the chest of the tackle with heavy hands, taking control and allowing him to shed off it.

Watch the contact here. This is how Willis will win most often in the league. By the time there’s contact, the battle has been decided. 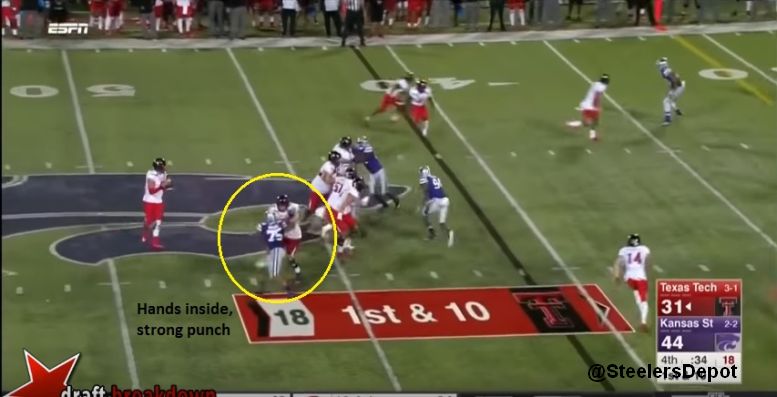 It’s not all speed to power though. He does a fantastic job of being able to shed after making contact, showing the ability to go from a bull to rip move or a swim/rip. When he makes contact, he does a really nice job being able to bend the edge and get upfield. Here’s just one example.

His hand usage is really advanced and nuance and a lot of fun to watch. Winning with technique and precision, not just speed running around like crazy and hoping to feast off slow-footed right tackles.

A top three cone time makes it feel like he should have some of the best bend in this class. But it doesn’t always come through. Too often, he gets run up past the junction point, the point where the DE needs to turn to the QB without drifting beyond the top of the launch spot. 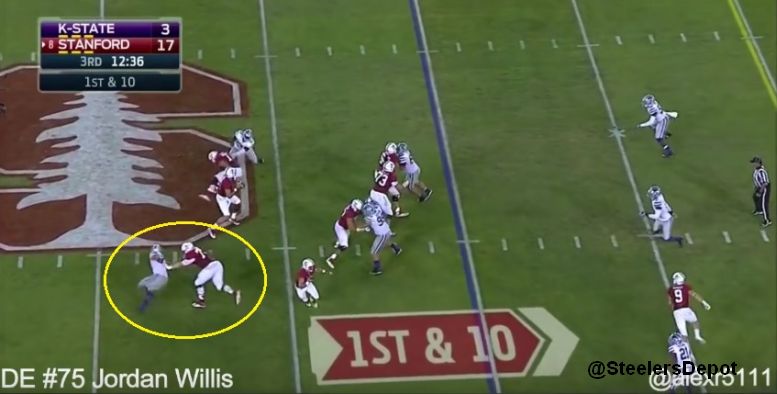 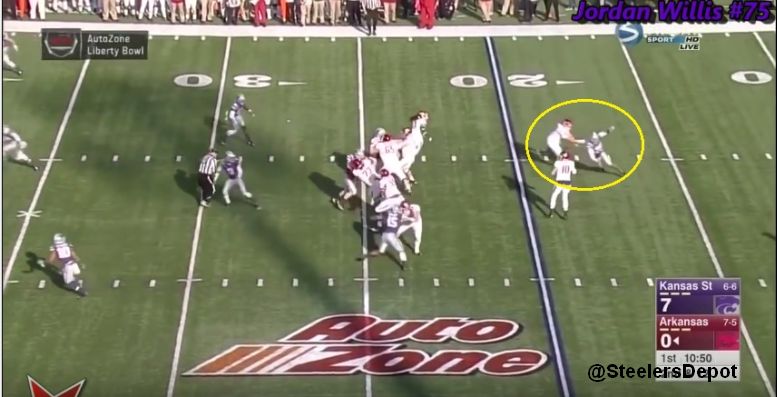 That’s the number one and maybe the only major issue Willis has. But it’s a big one, a deal-breaker if you’re not convinced, and will surely elicit Jarvis Jones comparisons in the comments below. But to also be fair, Willis absolutely blew Jones out of the water in every measure, including ten split and three cone, two important measures. 4.53/6.85 for Willis, 4.88/7.46 for Jones. Big disparity.

Still, it’s the one of two pass rushers this year I’ll give a personal pass on with the Jones’ comparison. He and Joe Mathis are the two times I’ve referenced it. Willis could turn about to be a Jarvis-type guy and I have the same feeling about Willis as I did Jones.

But Willis is more impressive. Jones had a strong punch but his hand use was a lot worse and less nuanced. He’s apparently got a great football IQ and a high character player who like I said, has just killed it at every event he’s been at. At school, at the Senior Bowl, at the Combine. It’s hard to deny that.

Games Watched: vs Arkansas, at Stanford, vs Texas, vs Texas Tech, Senior Bowl