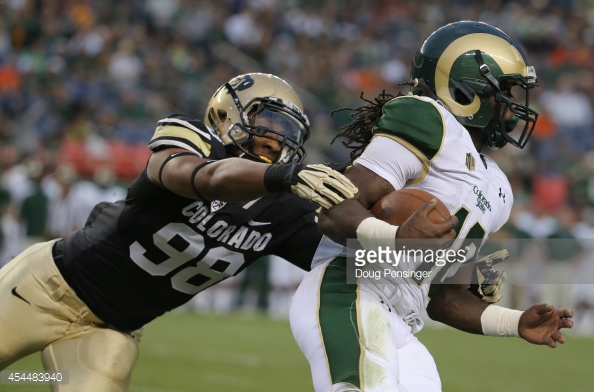 – Impressive looking frame, long and lean, ability to add weight if need be, looks good getting off the bus
– Uses length to his advantage and creates space vs run and pass
– Shows upper body strength and ability to hold the POA against the run
– Technically sound against the run, proper hand placement, keeps outside arm free on force, and shows ability to wrong arm on pulls, well taught
– Has a strong initial punch as a pass rusher
– Shows ability to win the edge when he times snap and has a step
– Played all over the defense, OLB primarily but experience dropping and playing over the slot, used almost exclusively in zone coverage but good feel for routes and ability to reroute receivers funneling into his spot
– Tested well at his Pro Day
– Came on strong with excellent senior season
– Athletic bloodlines

– Not a natural pass rusher, tall and overall stiff, unlikely to succeed as a 3-4 OLB at the next level
– Lacks a go-to pass rush move
– Some evidence of hand use and ability to shed as a pass rusher but happens too late in the rush and doesn’t look effortless/natural to him
– Unable to bend through contact and won’t often win with finesse
– Probably will have to learn new positon/role in the NFL

I perked up when I saw Gilbert’s name in Tony Pauline’s Pro Day recap and to be honest, originally thought he was listed as a running back. I realized I had read it wrong, he wasn’t, but the fact he was an outside linebacker interested me all the more.

Unfortunately, I don’t think Gilbert is going to stick at that spot in a 3-4 like the Steelers, even if he has some pretty good sack totals in his career. But there’s still something to like.

Gilbert is an impact player against the runs with upper body strength and good hand use to maintain his gap and get off blocks. Sheds this block as the force defender to keep the ball inside. He’s #98, lined up in the slot to the bottom in the clip below.

And here, he gets off this block on the run to chip in on the tackle. At the traditional ROLB spot.

Maybe most attractively, he is one of the few edge guys who looks comfortable and natural in space. He played all around the Buffs’ defense, often being detached from the box to cover the slot or dropping from his OLB spot to reroute receivers. He never recorded an interception and has only two career pass breakups, so don’t expect him to be some sort of crazy impact there, but he’s fluid in his drops and uses his size to bump receivers off the stem of the route.

As I wrote at the top of the negative portion of the report, Gilbert isn’t a natural pass rusher and he’s going to have to make a move at the next level. Either a 3-4 inside linebacker or 4-3 SAM/MIKE type. In Pittsburgh, obviously the former. He has a decent punch but no go-to move and is often stuck on his rushes, doing little to challenge the QB. ROLB.

After a really strong Pro Day, he’s someone worth taking a flier on in the 7th round. The team missed out on Shaquil Barrett, though to be clear, they are two different types of prospects. (edited for Alex’s wrongness)

Bouncing off what I wrote in Monday’s mock draft, he’s a different mold from Vince Williams and Tyler Matakevich. More athletic profile but still strong against the run. May take some time to develop but someone to keep in mind on Day Three.

Games Watched: vs Colorado State, vs Stanford, at Michigan