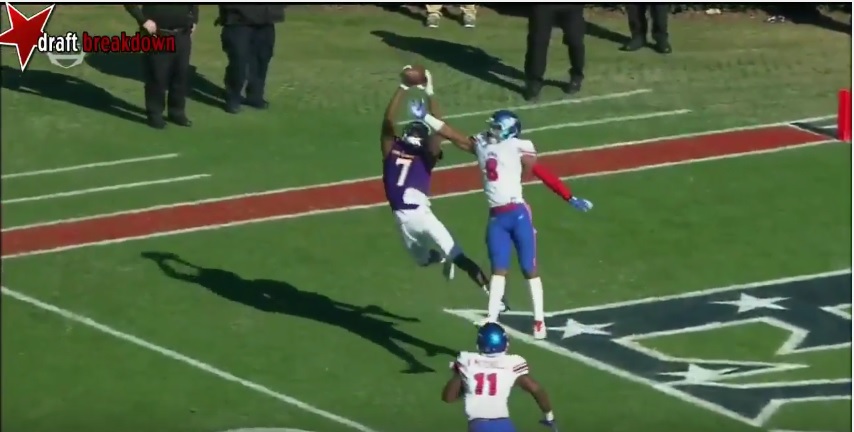 -Technical route runner that is effective on boundary or in the slot
-Twitchy lower body that allows him to explode in and out of cuts
-Nose for the sticks
-A real chain-moving, possession receiver
-Wide catch radius with consistent hands
-Great feel for finding the soft spot in zones
-Durable receiver that had a heavy workload
-NFL bloodlines; son of former Cowboy Robert Jones and nephew of former NFL quarterback Jeff Blake

-Soft blocker that doesn’t really like to mix it up
-Limited route tree largely due to scheme; tons of stops, speed outs and slants
-Not a serious RAC threat with ball in his hands
-Usually goes down on first contact
-Struggles to create separation on deep shots

East Carolina receiver Zay Jones is a ton of fun to watch on tape. In my three years of watching draft prospects and breaking them down in articles, I’ve never had the chance to watch a receiver of Jones’ caliber while also seeing him get a ton of work each game.

As the FBS career leader in receptions (399), there’s plenty of tape available on Jones with the ball in his hands, which fits perfectly into what exactly we’re trying to accomplish here, which is getting a complete feel for a player on tape.

With Jones, he’s a workhorse receiver that has a knack for getting open and making big plays for the Pirates over the last four seasons.

The first thing that jumps off the tape with Jones is his great route running ability. More often than not, receivers coming out of spread offenses are poor route runners, but not Jones.

He has a great feel for the position and knows how to find the soft spot in defenses. But it’s his technical route runner that frees him up on a consistent basis.

Coming out of the slot, Jones has current Atlanta Falcon defensive back Brian Poole on him. By getting up the field quickly, Jones pressures Poole to get into his backpedal.

From there, great footwork and a good head fake by Jones causes Poole to stumble and fall down, leaving Jones wide open in the middle of the field for an easy touchdown.

In the East Carolina offense, Jones ran a lot of simple routes, such as the speed out. It might not look difficult on paper, but if you round off your routes on speed outs it can give the defensive back a chance to jump the route.

With Jones, he rarely rounds off routes, and in the clip above you see the quick transfer of weight from his inside foot at the top of his steam back to the outside, giving him the quick burst needed to get to the sideline.

Once there, he makes a tremendous catch, showing off his great hands and solid body control to make the toe-drag catch just short of the sticks.

A big thing with non Power 5 guys is the question about their level of competition, but when playing Power 5 schools throughout his ECU career, Jones always had big games.

Against South Carolina, Jones often saw press coverage, but his tremendous footwork off the line allowed him to routinely beat it, much like he did in the clip above.

Once he is able to beat the corner off the line, he’s able to work into the middle of the field and get open to make the play. This play alone sold me on him as a possession receiver that isn’t afraid to go across the middle and can make the tough catches to move the chains.

Through nine games of Jones’ tape, I counted just three drops. That’s a phenomenal number when you consider that he caught 158 passes last season for the Pirates.

Part of that has to do with his great catch radius despite being just 6-foot-1. His long arms and big hands allows him to snare the football out of the air.

The only issue I really have with Jones though is his limited production in the red zone for ECU. Despite being the No. 1 receiver in a pass-heavy offense, I saw just three touchdowns from Jones in those nine games, only one of which came in the red zone.

But man, was it a thing of beauty.

I love the ability to high point the football here after spinning at the top of his stem to get into the end zone. This play right here was what I was looking for from Jones in the red area.

Overall, I’m really impressed with Jones as a complete receiver. I understand that most of his production came on the back of high-volume throws like screens, crossing routes and short, underneath stuff, but he has shown the ability to get open with great footwork, has strong hands to make difficult catches and is a durable weapon despite the heavy workload.

After an impressive combine (4.45 40, 36-inch vert), I can see Jones pushing his way into the top half of the second round.