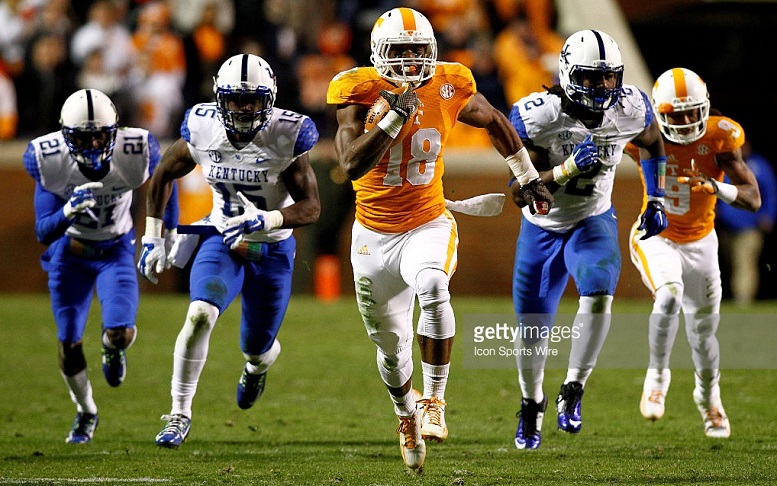 –Redshirted in 2012 after 3 games due to shoulder injury
–Reshirted in 2015, due to a knee injury suffered in the 2015 TaxSlayer Bowl
–Ran track and played basketball in high school, won state championship with basketball team
–Was a 3 star ESPN recruit and a 4 star Rivals and Scout wide receiver
–Finished his college career with 60 catches for 816 yards, 6 touchdowns and only averaged 1.5 catches a game
–Competed in Offense-Defense All-American Bowl out of high school
–Bulked up over 20 pounds to make the switch to tight end

He lines up as an inline tight end across from a defensive end. At first glance, Croom has a flat back which causes him issues as the ball gets snapped. The poor stance allows the defender to beat him off the line into the neutral zone, where #18 grabs the DE off balanced and with the opposite arm. That does not impede the defender, so Croom spins around and tries to block another defender high.

Goes into motion just before the snap of the ball. Joshua Dobbs fakes the give to Kamara while the tight end continues his motion. This opens up the right side flat where Croom catches the pigskin in stride and turns upfield. He reads a receiver’s block cuts inside and uses a stiff-arm to get a little more yardage before getting gang tackled.

Another fake handoff between Dodds and Kamara allows the h-back to dip into the flat without a defender on him. Crooks snares the ball in stride, bounces off one tackle, then spins while running downfield for a 30 yard gain.

After being repositioned to the right of the QB, Croom gets a clean release off the line from the H-back position. He finds a soft spot in the zone around the middle of the field. The Volunteer uses the referee to help him screen a defender away along with his stiff-arm. Croom then transfers the same stiff-arm to the awaiting safety Justin Evans riding him another five yards until forced out of bounds.

The former Volunteer did not make much of an impact during his college career averaging about a catch and a half each game. He still looks very much like a bigger possession type receiver, instead of a tight end/H-back. Croom could get play schemed into some success, but I highly doubt he could be a starter in the NFL. The Steelers brought him in for a visit, so I can only assume that it would be as a red zone target, H-Back, or a special teamer role.