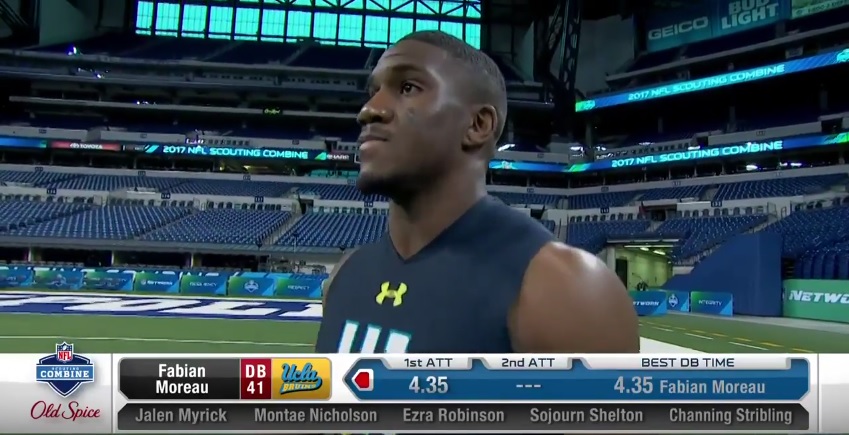 -Struggles to create turnovers; just three interceptions in his career
-Slow to get his head around on deep shots
-Gets touchy on routes, leading to a large number of penalties throughout career
-Must get better at fighting through blocks when defending the run
-Lengthy injury history

-Three-year starter for UCLA (37 starts)
-Ran a 4.35 40 at Combine
-Suffered pectoral injury at Pro Day, which required surgery
-Suffered a Lisfranc injury during redshirt junior season, missing all but three games
-Switched from running back to cornerback during freshman season
-Honorable Mention All-Pac 12 in 2016
-Had 10 pass breakups and two interceptions in redshirt senior season

As a former running back turned cornerback at UCLA, redshirt senior Fabian Moreau has been a pre-draft riser as of late due to his build and testing numbers at February’s NFL Scouting Combine.

But on tape it’s clear just why he should have been talked about well in advance of the combine and other various pre-draft exercises.

Standing 6-feet tall and weighing just north of 200 pounds, Moreau has prototypical size and strength for the position at the next level.

Although not overly physical on a consistent basis, Moreau is a guy who is comfortable playing in most coverage’s, whether that’s press, man-to-man or zone coverage.

Back in 2015 against current Pittsburgh Steelers wide receiver Canaan Severin, Moreau is able to bully him to the sideline on a vertical route, completely taking him out of the play.

In the process, Moreau is able to set up a turnover for his teammate, which helps the Bruins hold off the Cavaliers in an early season matchup.

With his powerful frame, I’d like to see Moreau be a tad more physical in coverage, but that can be something he grows into as he still has room to add to his frame.

Outside of being able to manhandle receivers in press coverage, Moreau is really adept at sitting in coverage and reading the quarterback’s eyes before then breaking on the throw.

By reading the quarterback’s eyes and anticipating the route, Moreau is able to undercut the route for the interception against the Trojans in a rivalry matchup.

The thing that really has me excited about this clip is the closing speed to the ball as it looks like Moreau hits a second (possibly even third) gear to beat the receiver to the spot for the interception.

That’s where his testing numbers really come into play.

But a big thing with Moreau is that he really didn’t do much when it came down to creating turnovers, largely because he was a slow to get his head around on throws where he clearly had a shot at making a play on the ball.

Take this deep shot from USC, for example.

JuJu Smith-Schuster beat him cleanly off the line at the snap, and from there Moreau is in the trail technique. But he simply doesn’t read Smith-Schuster’s eyes and is very slow in getting his head around to make a play on the ball, leading to a long reception for the Trojans.

One thing that I really looked for in Moreau’s game was his ability to support against the run.

Although he’s already on a corner blitz at the snap, Moreau shows a ton of patience and discipline here by slowing down and breaking down to make the stop behind the line of scrimmage.

Too often I see corners flying into the backfield out of control, missing tackles in the process, but Moreau showed veteran poise here to make the play.

As I said earlier, I’d like to see him be a bit more physical as a defender, but I’ll take a guy that makes the sure tackle every time over the guy looking to lay the big blow for the highlight reel.

That being said, Moreau has to improve at getting off of blocks. He’s very slow and deliberate in that area, which can lead to the play blowing right past him.

Overall, Moreau should still be an early day two draft pick even though he’s recovering from the pectoral injury suffered at his Pro Day. He’s got the ideal build, strength and athleticism for the position and could develop into a solid starter at the next level, should he be able to stay healthy.