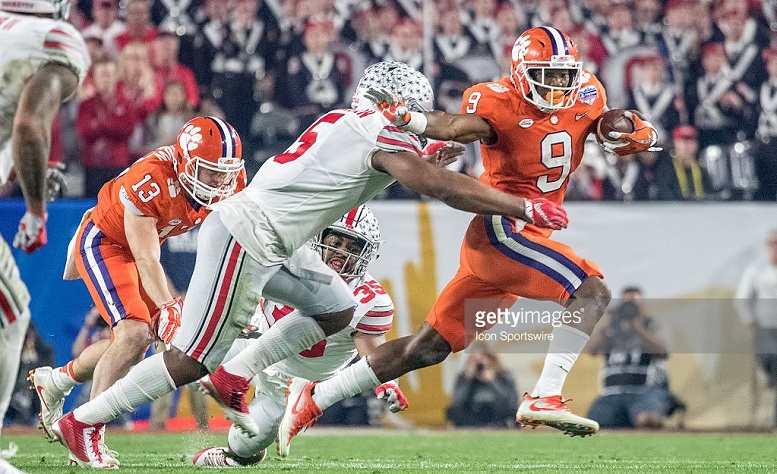 Seeing as Mike Tomlin and Kevin Colbert had the opportunity to familiarize themselves with various talent at the Clemson pro day, there is no better time to attempt to dwell into their minds and take a closer look at Clemson running back Wayne Gallman. There does appear to be some genuine interest in Gallman, as in addition to attending his pro day, the Steelers also met with Gallman during the NFL Combine.

Gallman’s identity could be described as a tough, hard nose runner who shows an impressive burst to the line of scrimmage. Among the many qualities that Gallman possesses, his ability to turn up field quicker than his size might suggest is the most instrumental factor in his success.

Though Florida State is stacking the box, Gallman waits for a lane to develop before cutting up field. From here, Gallman smoothly navigates his way past defenders before finally being brought down at the Florida State 33-yard line. Gallman is not afraid to drop a shoulder into a second level defender and for that you’d be hard pressed to find a better run finisher than the Clemson back.

A decisive, one cut runner, Gallman can use his burst to quickly hit closing holes while running between the tackles. Watch how Gallman narrowly escapes through the jaws of the Louisville defense on the play below.

As the Louisville middle linebacker appears to head towards the left A gap, Gallman cuts back to the right side, accelerating through a closing hole in just a fraction’s time. Throughout his college career, Gallman shows the ability to muster out tough yardage by running between the tackles.

Louisville is also the victim team at hand for the next play that will demonstrate Gallman’s outer cut step that the running back uses to nab defenders who have over committed. Though Gallman lacks the shifty hips that most elusive backs have, his outside step cut has kept him floating thus far.

The areas of difficulty for Gallman center around his tendency to run upright towards the line. Gallman is not afraid to run downhill into contact but when approaching the line of scrimmage, the running back presents a big target and leaves himself vulnerable for hungry defenders.

Running with his shoulders parallel to the ground, Gallman is easily held up by linebacker Ryan Anderson and left as target practice for the swarming Alabama defense. By being upright, Gallman has given Anderson clear sight of the football and an easy opportunity to force a fumble.

Gallman’s upright running style becomes a much more liveable trait of his baggage when you come to terms that it is miles away from being his biggest weakness. The Clemson back will need more than just a quick polish when it comes to his pass protection, instead needing a complete makeover.

Here are two pictures from Gallman’s photo album titled “How Not to Pass Protect”. In the first picture, Gallman may look as if he is attempting to flip the Auburn defender over his back, a far cry from the usual pass protection techniques. 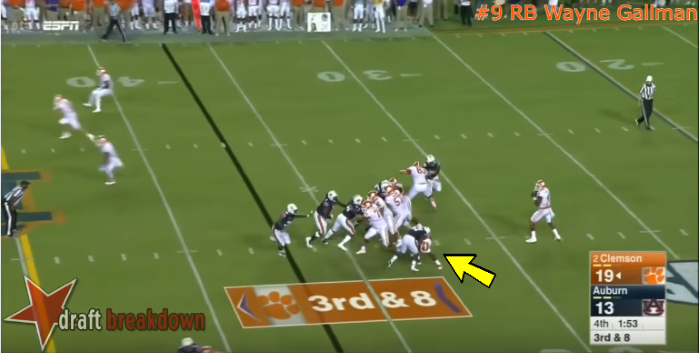 Gallman is also susceptible to whiffing entirely on blocks, and the second picture of our photo album demonstrates that clearly. Instead of anchoring up with the oncoming pass rusher, Gallman chooses to launch himself like a nuclear warhead. 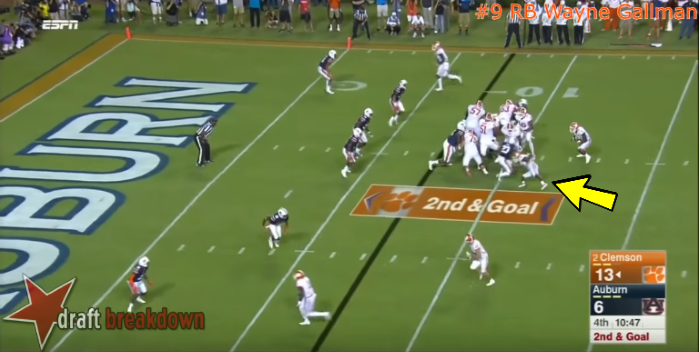 Unfortunately but not surprisingly, the missile launch backfires and results in a casualty. Clemson’s quarterback DeShaun Watson is lost in battle, falling at the hands of the defensive back that Gallman was tasked with picking up. The Clemson back will have to significantly improve in this category if he hopes to one day be a capable three down back.

Though Clemson ended its campaign with a championship pedigree, Gallman may be a few steps away from being a championship caliber back at the next level. While a tough runner who consistently finishes runs well, Gallman will struggle to become a complete back until he can shore up in pass protection. Until then, Gallman projects to be a possible mid round selection who could become a middle of the pack starter in the NFL.

Games Watched: vs Alabama, vs Auburn, vs Louisville, vs Florida State, vs Wake Forest, vs South Carolina