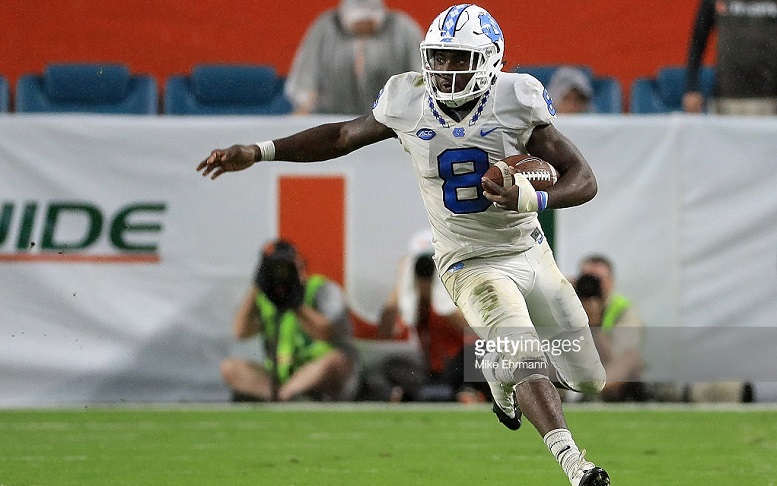 – Subpar vision, average instincts when running between tackles
– Inconsistent at holding his own in pass protection
– Does not break many tackles

Where there’s thunder, there’s bound to be lighting. The same statement holds true for the North Carolina backfield as the thunderous Elijah Hood shared the backfield with lightning quick running back T.J. Logan for much of their college careers. Like thunder, it is Hood that is making majority of the noise between the two backs but you cannot sweep aside the home run ability that Logan can provide on a flash either.

A state champion in the 100-meter dash as a senior in high school, Logan continued his track star showing at this year’s NFL Combine, finishing with the fastest time for a running back (4.37). Logan’s speed is fueled by his effortless transition into second gear which gives many defenders the impression that they have an opportunity stop Logan dead in his tracks but just as they can process this thought, Logan has already surpassed them.

As NC State learned on the play above, forcing Logan to the perimeter is not a strategy for success. It is on the outside where Logan has the most space to accelerate and cause harm to the opposing defense. For a player moving at Logan’s speed, he presents almost an impossible target to square up and tackle.

Not only limited to perimeter runs, Logan shows a feel for cutting back on the play direction in order to create substantial yardage. Watch for yourself how many times Logan is able to surpass and squeeze through defenders ahead of him, it almost seems as if Logan is playing in fast forward speed while the rest of the defense is played in normal time.

When a player with Logan’s speed comes along, it is generally assumed that majority of their value comes as a change of pace option. Logan brings more than just a change of pace option into the conversation. The UNC running back is a reliable pass catching threat who can line up wide or catch out of the backfield. With sure hands and elite speed, Logan becomes an offensive weapon no matter where he lines up on the field.

A human highlight reel, those are the only words that come to mind when watching Logan’s tape.

When teams look for running backs to fill out their rotation, they often ask what the running back in question brings to the team. In Logan’s case, the UNC running back has scored the hat trick in filling out the criteria required.

Is Logan a weapon in the running game? Yes.

Is Logan a weapon in the receiving game? Yes.

And is Logan a weapon in the return game? Yes.

It was just longer than a decade ago that Devin Hester took football by storm with his electric return ability, creating the “Don’t kick it to him” movement. Logan elicited the same response in the college football world, boasting five career touchdowns and averaging 32.9 yards per return last season. A threat whenever he gets his hands on the ball, kickers face the option of kicking the football out the end zone or pay the ultimate price.

With his limited size and vision, Logan may never hold the title of every down back in his career but the UNC running back still figures to be one of the better third down options in this year’s draft class. Teams are always looking to add valuable commodities to their back field and Logan does just that by providing speed, hands and return ability, making him a valuable three for one package.

Games Watched: vs Florida State, vs Duke, vs Citadel