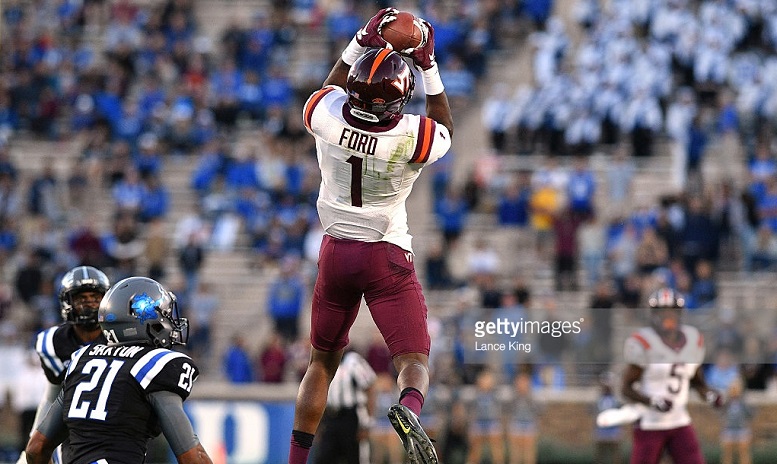 – Very shifty route-runner: stems routes well, uses head/eyes/shoulders to deceive DB’s, varies his speed to keep DB’s off balance
– Fluid hip movement, which helps him get in and out of breaks quickly
– Showed good strength/toughness when making contested catches across the middle; not afraid of contact
– Excellent body control, especially on jump-balls and back shoulder fades
– Can run a full route-tree from both the outside and from the slot
– Outplays his 4.61s 40-yard dash time: he should great acceleration and regularly beat defenders on deep routes

– Average Catching ability: occasionally bobbled easy passes and had random drops (8.1 percent drop rate)
– Blocking needs improvement, he often was unbalanced and leaned too much on his toes (which allowed DB’s to easily shed his blocks)
– Average open-field playmaking ability after the catch
– Tends to body-catch and is not great at high-pointing jump-balls; he would often shield defenders and let the ball get close to his body before securing the catch
– Lacks significant experience against press-coverage, frequently played against off-man
– Average Measurables: 4.61s 40-yard dash, 6.94s 3-cone drill (50th percentile), 4.34s 20-yard shuttle (20th percentile), 14 reps bench press (46th percentile)

– Career Receiving Stats: 39 games, 210 receptions, 2,967 yards, 24 TDs
– Freshman year: 2014 Honorable Mention All-ACC (ACSMA and Coaches)
– Sophomore year: 2015 First Team All-ACC (ACSMA and Coaches), Set a Virginia Tech single-season record with 75 catches, set a school record for touchdown catches in a season with 11, Became the first Virginia Tech player to have more than 1,000 receiving yards in a single season
– Junior year: Second-team All-ACC, broke his own school record for single-season receptions with 79
– Was an elite basketball prospect coming out of high school: averaged 37 points per game as a senior and scored 59 points in one game. He was named first-team All-First Coast and scored over 1,500 career points in his career.

Ford’s route-running is the first thing that jumps out when watching his film. He uses subtle body movements and explosive cuts to create separation and can prevent DBs from recovering with his fantastic acceleration. For example, in this play against Tennessee, he is patient coming off the LOS, he keeps his head/shoulders squarely downfield, and he angles his stem (slightly) to the outside shoulder of the corner. Additionally, Ford’s quick hands and feet help freeze the DB before he bursts inside on his slant route. Crisp patterns like this are a consistent feature of his game:

This double-move against Tennessee is another example of Ford’s precise route-running. He does a nice job of selling the out-route by chopping his hands/feet on his initial break, snapping his head and shoulders to the sideline, and then finishing the play by flipping his body back downfield. Overall, a very smooth and textbook route:

Ford demonstrated great body control on a variety of route concepts. He was willing to fully extend his body on off-target passes across the middle and showed a good ability to adjust after locating the ball in-air. Here against Syracuse, he shows this skill set by finding the ball and quickly turning his body to the outside in order to complete the reception for a touchdown:

In this back-shoulder touchdown against East Carolina, Ford again showcases his body control, as well as his ability to fight through contact when making contested catches:

On the negative side, Ford occasionally had issues with dropping the football. I wouldn’t necessarily characterize this issue as a major or reoccurring problem because his drops were sporadic and he was generally a reliable receiver; however, it is still noteworthy and could become more pronounced in the faster, more physical professional game. In this clip against Boston College, although he does a great job of getting open on a slant, he drops the easy reception and tips it in the air, which ultimately leads to an interception:

Overall, Isaiah Ford is a quality receiver who has a skill set that will allow him to contribute to an NFL team. He is not the most dynamic receiver in this year’s draft, but his competitiveness, work ethic, and excellent route-running ability should help him compensate at the next level.  He still needs to learn how to get a smooth release against press coverage and may struggle early in his career against physical cornerbacks; however, he has a lot of natural ability that can be developed and improved with professional coaching.

Games Watched: vs Tennessee, vs Boston College, at Pittsburgh, vs East Carolina, at Syracuse, vs Ohio State (2015), at Purdue (2015)