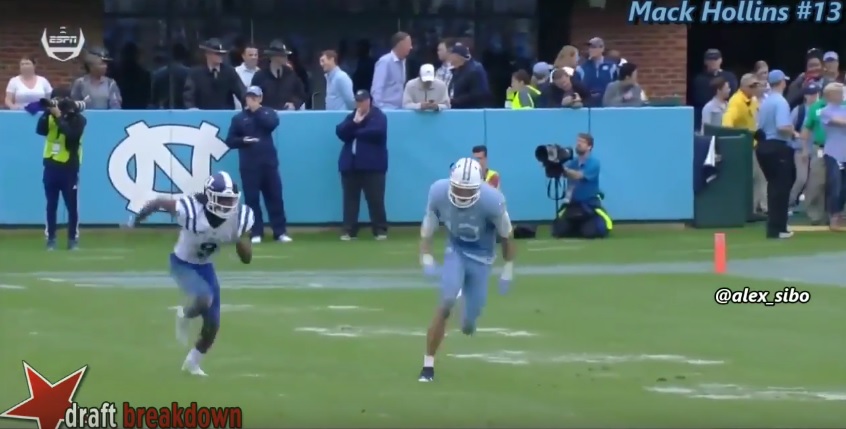 – NFL frame, runs well for his size, and a true Z receiver type, top length and good hand size (33 1/4 arms, 9 3/4 hands)
– Build-up speed, long strider and has big play ability downfield
– Does well to stack CBs vertically to help mask lack of deep speed
– Shows ability to break down and separate on longer developing breaking routes and works hard to get back to the football
– High effort as a blocker who uses size and length to his advantage
– Uses hands well to beat press and gets off the line relatively quickly
– Good football IQ and aware of down/distance, where the marker is at
– Tons of special teams value and very likely will carve out a niche there
– Regarded as a tireless worker and a top notch character

– Lacks long speed though is good relative to size (4.53 at Combine)
– Not a twitchy player who is going to separate at the top of his route with his agility or burst, will rely on size to box out smaller defenders
– Struggles to break down on shorter breaking routes where he has to break down quickly after accelerating
– Limited YAC threat after the catch
– Limited body of work and mostly a one-trick pony in school

Hollins is going to be addressed as a receiver, and he certainly has talent there, but the focal point should be on what he offers on special teams. Just like he did in college, that’s how he’ll begin his NFL journey.

He wasn’t a high-prized college recruit. In fact, pretty much no one knew or cared who he was. He even spent a year at a JUCO, threw his resume out to 100 different schools before UNC – his dream school, by the way – offered him the walk-on opportunity. He spent two years there, earned his way on special teams, and nearly left school before getting that all mighty scholly. ESPN has a great feature story on his background and you should definitely check it out; the author, Jared Shanker, knocked it out of the park.

Before getting the full ride, Hollins ate Ramen Noodles and pinched every penny so he could avoid talking to his parents about lending him more money. So it’s a great story and fun feature piece for whatever team he goes to.

To the field because hey, that’s the most important thing. As a receiver, he is a mega-deep threat rarely caught a short pass in college. He doesn’t have great speed but similar to Chris Moore last year, Hollins is bigger, by the way, he just wins deep. He’s able to stack the CB vertically, a key trait, making it really tough for the corner instead of them being stride-for-stride and making it a 50/50 ball. This is a great example.

In that sense, he could be an X receiver even if his size reminds you of a Z type. His route tree isn’t varied, he isn’t twitchy, and he’s going to win with size and vertical route running ability. But if you want to play him as the Z, the strongside WR (Bryant, Coates, Cobi), he’s an excellent blocker who takes a lot of pride in the little things.

The little things like special teams. He didn’t do much in 2016, being thrust as a starter and then missing half the year with a bum collarbone, but he was an asset when running down kicks and punts. He’s also been on the punt return unit as a blocker.

His long-striding ability and “hair on fire” mentality – to steal the term of how Mike Tomlin called Curtis Brown – is immediately evident. Like here in 2014 against Duke, weaving past two blockers and still making the tackle for a short, 11 yard return.

Or here in 2015 against Clemson, diving out to make an ankle tackle.

You’re probably comparing him to a Darrius Heyward-Bey career arc, without that whole “first round bust” aspect, and you’d be right. DHB is much, much faster than Hollins but they’re both deep threats and great special teamers who don’t offer much else. But what they offer is something a lot of receivers can’t bring, won’t bring, and a guy like Hollins might be one of the few guys to bump DHB off the roster. He won’t be drafted until late but you can bet he’ll make a 53 man roster.