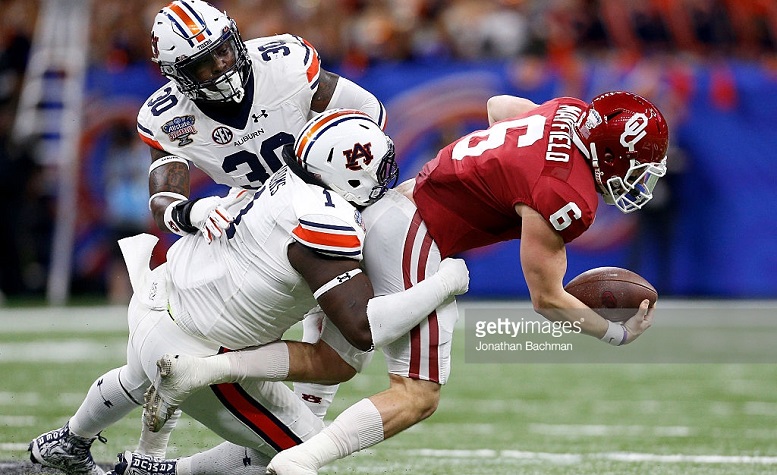 – Big, strong powerful trunk
– Gets across line of scrimmage quickly
– Explodes out of stance right into his gap, causing disruption
– Athletic enough to stunt inside and outside with good results
– Forces a lot of double teams when he keeps his hips low
– Gets his arms up when he cannot reach quarterback to knock down passes
– Disciplined to play backside runs
– Defends one gap well

– Has no refined pass rushing techniques: sometimes swims or spins, but technique is sloppy
– Takes a long time to disengage from blockers
– Plays boiling hot and ice cold
– Can lose his leverage quickly within two steps by standing upright
– Does not play two- gap well

– Played in Under Armour All- American Game in high school
– Finished with 58 career solo tackles, 52 assists, 24.5 tackles for loss, 14 sacks, 3 forced fumbles, 3 fumble recoveries, and 2 interceptions returned for 43 yards
– Was ranked as 3rd best DT by Scout and 3rd best DL by Rivals coming out of high school
– Team captain
– Invited and participated in Reese’s Senior Bowl
– Blocked a field goal and also blocked an extra point his senior year

Adams gets off the line of scrimmage quickly, gets underneath the guard driving him back, and slides right by the pass blocking running back. The defender sees the quarterback ready to throw, jumps in front with arms outstretched knocking the pigskin high in the air.

The defensive tackle lines up in A-Gap between the center and guard, gets low putting the guard on skates, and keeps good leverage. This forms a pile up, Adams finds the ball carrier and falls on him to force him to feel his full 304 lbs.

The Auburn defender is cocked and loaded ready to bear down in the A-Gap. He explodes across the line of scrimmage, forcing the guard inside with his extended arms, and then springs his upper body outside when he sees the back coming into A-Gap. Adams swallows him whole for the tackle with minimum gain.

Adams gets across the line of scrimmage in a hurry, flowing down the line where it appears the lay is headed. When the runner reverses his field, our Tiger defender flips his hips around and pursues the back 20 yards downfield through the trash to get a piece of the tackle.

The Tiger defensive tackle stunts outside into B-Gap, keeps his body under control enough to see that Deshaun Watson has tossed a screen to his side of the field. Adams explodes down the field in pursuit and tackles Wayne Gallman in the open field after a fellow Auburn defender slows the runner down.

The former Auburn Tiger defender is a natural three tech who needs to play more consistently from play to play. When he is on task, watch out! However, the NFL team that drafts Adams will need to assist him in developing his pass rushing techniques (a bull rush would be great). I believe he could learn to anchor as a five-tech with his powerful bubble and strong upper body, but a second day investment in that belief for the Steelers would be an unnecessary gamble with other situations to firm up instead.

Projection: second or third round