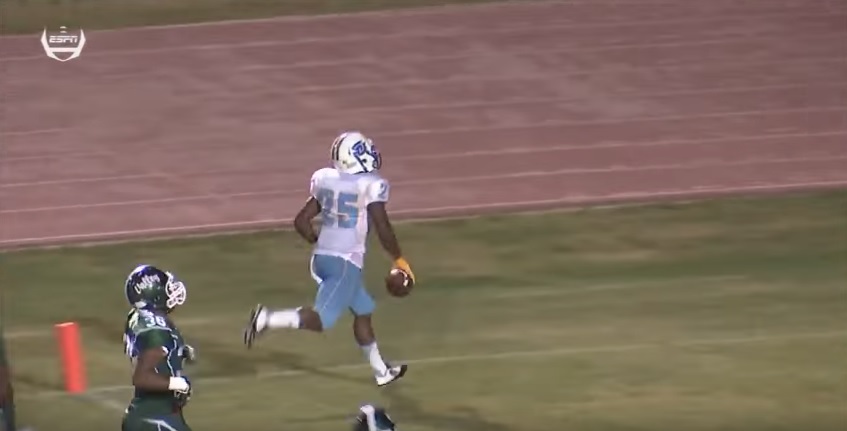 – Elite short-area quickness, changes directions without any loss of speed, and makes defenders look downright silly with his COD ability
– Appears to have excellent long speed, 4.3 type, and routinely got behind even Division One defenses
– Quick to the tuck, big threat with the ball in his hands, and top ability to make people miss in the open field
– Able to separate in route tree and quickness stresses CBs, who have a tough time staying in-phase and staying on their feet with his ability to break down, use double-moves, and overall agility
– Dynamic kick and punt returner whose athleticism shines and size is mitigated
– Does a nice job of getting under and square to punts and didn’t see evidence of him bobbling the football, all catches are clean
– Shows body control along the sidelines and able to track the football over his shoulder
– Makes tougher catches than you expect, good feel for open zones and able to settle, make catches over and across the middle in traffic
– Football IQ and performs well in scramble drills, gets himself open and doesn’t quit on the play
– Experience playing in the slot and as the X receiver
– Versatile player who was a star receiver, kick and punt returner, and even threw passes, gadget usage
– Regarded as a high-character, driven athlete, who showed durability in his career despite small frame

– Incredibly undersized, hands almost certainly small, and will cap his role in the league
– Dances too much as a receiver and a returner and won’t have the type of time and space in the NFL
– Struggles to finish catches downfield when contested, easy to play the pocket and knock the ball out of his hands
– Obvious competition concerns, played at a small school
– Trouble catching the ball outside his frame when asked to adjust to poorly thrown passes

At 5’5 150, it’s easy to move on to the next guy. But the NFL has proven it doesn’t care how big you are but how good you are. There’s a whole list of players with similar stature who have gotten a shot in the league.

Banks is who Quinn compares most favorably too. Like him, if Quinn is nothing more as a returner, the investment is still worth it because the risk is so low.

You might remember Quinn’s name from a 15 minutes of fame on Scott Van Pelt’s Sportscenter segment, highlighting his phenomenal game against Mississippi Valley State in 2015. It was a game where he had a punt return, kick return, and passing touchdown. Check out the clip by clicking this link.

Of course, that was against another small school half of you have never even heard of. What was most important was what he did against Division One competition and frankly, he excelled there too.

Southern played two D1 schools in 2016: Tulane and Louisiana-Monroe. Not powerhouses but a better gauge of Quinn’s talents (and Tulane had a decent defense). And Quinn played really well against both teams. Here’s his stats against both.

In the 2015 opener against Louisiana Tech, he had a 100 yard kick return. And it was one heck of a play. Going to apologize if the quality and/or frame rate isn’t the best in any of these GIFs. The footage I looked at wasn’t exactly in 4K.

And then there’s this one against ULM, where he averaged 35.3 yards on four kick returns.

Quinn has serious wheels and I can’t wait to see what he runs at his Pro Day. Should be in the 4.3’s and I wouldn’t be surprised one bit if someone times him in the high 4.2’s. That’s going to be a critical number because obviously, when you’re fighting that uphill battle because of your size, you better be bringing something special to the table.

In college, he wasn’t just a returner. He was an accomplished receiver all four years with the Jaguars. Watch this double-move at the top of your screen, using his speed and agility to make the corner look stupid. Would’ve been a TD if the ball hit him in stride.

He wasn’t just a gadget or vertical threat either. He ran the entire route tree and showed off good hands and the ability to make tough catches, including this skinny post over the middle.

Against those two D1 teams – I watched more Southern football than I ever thought I would – he was the offense. Their most productive player and pretty much their only weapon (and they have a pretty good running back too, Lenard Tillery).That’s passing a big litmus test, someone who has punched up his level of competition and came out looking strong.

The concerns with Quinn are obvious and I really didn’t feel the need to show you them because you can probably already imagine what they are. His lack of size makes any pass thrown off-line an adventure that at worst, is going to hurt his YAC ability. He struggles to contest catches downfield, the jump balls, and there is the risk of ball security issues. He should’ve had a second touchdown against Tulane but the ball somehow got stripped out right before crossing the goal line and out of the end zone, resulting in a touchback.

He’s not going to get drafted. Holliday and Grant got selected in the late rounds but they played at big schools, lessening the projection. Quinn’s height and school is enough to take him out of the top 256. But like Banks, he should be sought after as a UDFA with the returner aspect as the focus. He’s clearly driven, overcome a lot in his life, and you should read this feature piece on his life story, via The Advocate. Not a guy you should count out.

And here’s the kicker – the Steelers could totally pick this guy up. In 2010, Banks – the guy we’re comparing him to – was signed as a UDFA by the Washington Redskins.

Who was Washington’s special teams coach who signed off on/advocated for Banks? Danny Smith.