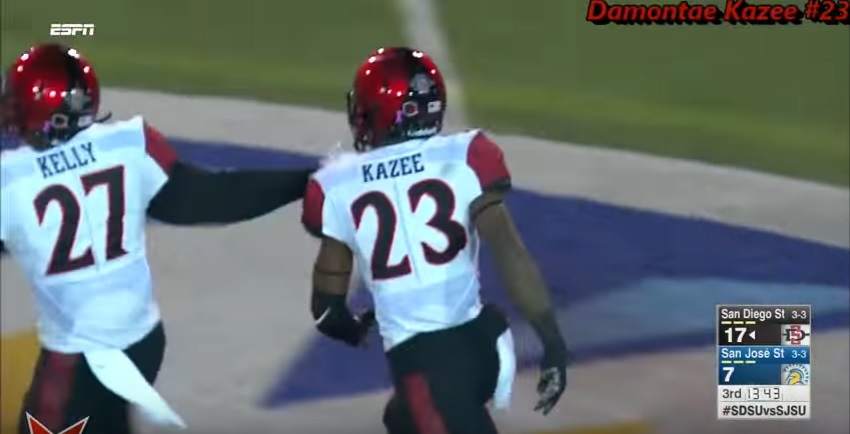 – Excellent feet and fluid hips, transitions out of pedal well flipping his hips and breaking downhill
– Explosion out of pedal creates power on contact and allows him to play bigger than his actual size
– Incredibly aggressive against the run, maybe more than anyone else in his class, and willing to sacrifice his body on the perimeter, takes on and undercuts pullers
–  Throws his whole body into the tackle and a tone-setter
– High football IQ in off man/zone, knows where and when routes will break and allows him to be a playmaker
– Physical in press coverage and doesn’t give receivers an easy release
– Good leaper, times jumps and makes up for lack of height
– Not just a slot corner, played on the outside as a RCB in college
– Experience in man, zone, and blitz concepts
– Some punt return value
– Tons of starting experience
– Excellent two final seasons in college, high level of production and a ballhawk

– Obviously undersized and lacks length (30 7/8 arms)
– Lack of length makes it difficult for him to play the pocket
– Long speed is only a bit above average, didn’t test great (4.54 at Combine)
– Will have to learn how to play in the slot if NFL team decides to kick him inside
– Doesn’t always wrap up against the run, goes for knockout blow
– Can be too aggressive in coverage and/or stick eyes in backfield and vulnerable getting beat deep

Kazee has an easy NFL comparison and based on his rookie year in the NFL, it’s a promising one. Kazee is this year’s Tavon Young. The size is obviously working against him, though 5’10 isn’t that short, they can’t all be Richard Sherman, but most will project him to the slot. That’s a fair analysis but like Young, Kazee has spent his entire career on the outside and could stick their in the league just as Young has.

Kazee has all the traits of an excellent zone corner. He’s one of the most exciting players to watch support the run. An angry disposition that would make Greg Lloyd swoon, it’s like he’s trying to prove everyone who questions his size wrong. You won’t find anyone who embraces the run better than Kazee, more than even a guy like Desmond King. He’s at the bottom of the screen, right corner, in the clip before, and where he’ll be in all these clips.

He does a better job of wrapping up in coverage with the same amount of aggression and power, showing strong lower half explosion to create power on contact.

His ball skills are elite and Kazee has a fantastic football IQ. You don’t just stumble into 15 interceptions the last two years. Watch him read this speed out, undercut it, and come with the game winning interception.

Didn’t see much press man in the games I watched but at the Senior Bowl, he showed the ability to press, again playing bigger than his size. It may not be his ideal role in the NFL but serves as a reminder of how aggressive and physical he is.

I do question his long speed and probably some over-aggressiveness that can get him beat deep. Like here against Jared Goff’s Golden Bears in 2015.

In Pittsburgh, he’s someone I’d move to the slot because of the glaring need. But I’m confident he can play on the outside for a team who demands it. Better zone corner than man, not because of size, but because of his football IQ and questionable deep speed. I want his vision on the receiver and the QB, not with his back turned where his lack of length will make it tough to combat a lot of throws. Even with the Steelers showing a level of desire to move to more man concepts and bigger CBs in general, Kazee is an ideal guy in the slot. With his IQ and work ethic, I got the vibe of the latter in the brief chat I had with him at the Senior Bowl, he could see the field sooner than most guys in the slot.