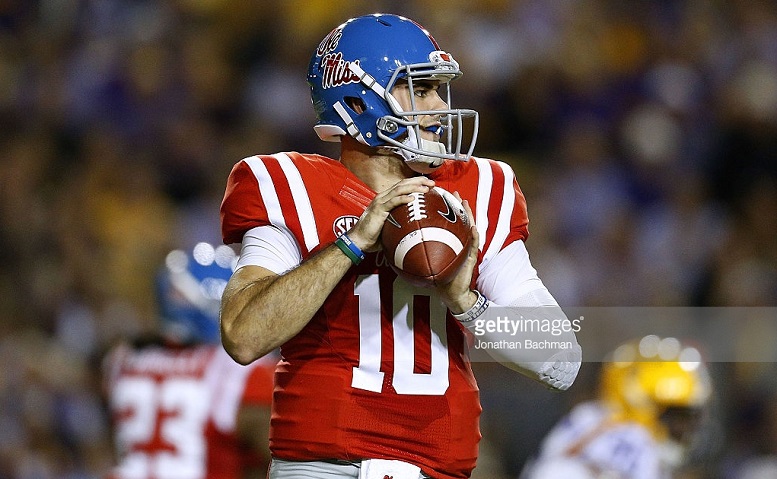 – Compact and over-the-top throwing motion
– Can throw with good touch across the middle
– Great anticipation skills and decisive decision-maker
– Strong arm (in terms of his max throwing distance)
– Toughness/Courage in the pocket, never flinches in the face of a heavy rush
– Deceptive athleticism: Kelly is not as graceful as some of the other dual threats in this draft; however, he can make plays with his feet when needed (think Aaron Rodgers running ability). Runs around a 4.70 40-yard dash.
– Accuracy: Although he can definitely improve, he was generally an accurate passer with good ball placement
– Able to work through full-field progressions. He was very comfortable in his offense and demonstrated a mastery of the scheme (especially given that he was a Senior QB)
– Played against quality competition in the SEC. Beat No. 1 Alabama in his Junior Season

– Major character issues and off-field concerns, currently lacks the leadership ability required to be a franchise quarterback
– Gunslinger mentality sometimes causes him to make questionable on-field decisions (throws across his body when rolling out, forces the ball into tight windows, etc.)
– Although he had a terrible offensive line, Kelly still took way too many sacks. He needs to learn to throw the ball away or hit his check-downs more frequently
– Tends to pat the football when initiating his throwing motion
– Despite having a strong arm, his passes lack zip and tend to float.
– Often threw to receivers based exclusive on pre-snap reads
– Puts a ton of weight on his front foot when throwing, causing some balance issues. Not a major problem though
– Footwork is not terrible, but his feet sometimes get out of sync with his upper body. His arm is talented enough where this not usually a major problem; however, he still occasionally throws poor passes that are directly linked to improper footwork

– Passing Stats at Ole Miss: 22 Starts (14 wins, 8 losses), 64% completion rate, 6,800 yards (309 avg.), 50 TD 21 INT
– Rushing Stats at Ole Miss: 187 attempts, 841 yards (4.5 avg.), 15 TD
– Chad is the nephew of Hall of Fame and former Buffalo Bills Quarterback Jim Kelly
– In 2014, Kelly threw for 3,906 yards, 47 TD 8 INT during an undefeated and National Championship season at Eastern Mississippi Community College
– Red Flags: Kelly was suspended for 7 games during his freshman year of high school and was later dismissed from the team. He was also dismissed from Clemson in early 2014 for “conduct detrimental to the team.” He subsequently transferred to Ole Miss. Less than a week after signing with the Rebels, he was arrested for punching a bouncer and threatening to open fire at a bar. In 2016, he rushed the field at his brother’s high school football game and was involved in an on-field brawl, which resulted in the game being suspended by the officials.

Chad Kelly’s off-field problems have been well-documented and NFL coaches will have to determine if his talent and potential outweigh his character flaws. Because this assessment will vary from team to team, it is probably more productive to focus on his on-field performance in this scouting report and evaluate him solely from an on-field perspective.

This first clip is a look at Kelly’s throwing motion. He has a quick and smooth delivery with little wasted movement. He occasionally pats the football before initiating his motion; however, this glitch did not affect his accuracy or timing and only seemed to arise when he got deep into his progressions and had excess time to throw. Additionally, he can “throw it from inside a phone booth” as the saying goes, which is a trait that will benefit him greatly when operating within the tight confines of an NFL pocket. Kelly also shows good weight transfer and hip movement when he steps into his throws. In fact, he sometimes steps too forcefully on his front foot, which leads to over-striding and some balance issues (notice how he is slightly off-balance and leaning to his left in the clip. This is not a fatal flaw, but is still worthy of some attention). Overall, he has solid mechanics and a clean motion:

One of the best traits that Kelly repeatedly demonstrated was his ability to anticipate open throwing windows. For example, in this play against Florida State, he finds the soft spot in the coverage well before his receiver actually breaks open. He identified the Cover 2 defense pre-snap, signaling that the deep middle of the field would be open, and also recognized post-snap that the Mike linebacker had a poor angle on the slot receiver’s in-breaking seam route. His quickness in reacting to defenses will help him transition to the NFL:

Here is a freeze-frame from the above clip of the moment that Kelly made the decision to throw. Notice the location of the Free Safety (aligned outside of the slot receiver) and how the Mike linebacker is facing the opposite direction as the slot receiver’s seam pattern. These details do not go unnoticed by savvy quarterbacks: 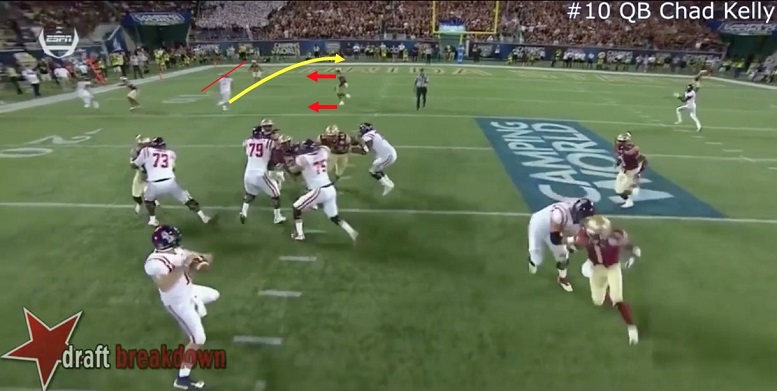 In this next clip against Georgia, Kelly showcases both his arm strength and his underrated athleticism. He does a nice job of keeping both hands on the ball as he side steps the pressure and he demonstrates great core and leg strength by breaking the tackle.  This pass travels roughly 65 yards in the air, which is even more impressive when considering that Kelly had to throw from an off-balanced position without getting to fully reset his feet:

Kelly was also a fairly significant threat in the run game. Although most of his runs came on broken plays or scrambles, he regularly beat linebackers to the outside to pick up first downs. He was generally able to avoid big hits by sliding or getting out of bounds; however, he is also big enough to lower his shoulder when necessary.  This clip against Georgia is just one example his ability to beat a defense with his legs:

On the negative side, Kelly suffers from some weaknesses that are characteristic of gunslinger quarterbacks. He sometimes tries to throw the ball into extremely tight windows and he also tends to throw across his body when rolling out. For example, in this clip he does a good job of avoiding the unblocked rusher, but he nearly throws an interception by carelessly tossing the ball into quadruple coverage:

Lastly, despite his strong arm and typically being very accurate on deep passes, Kelly was intercepted multiple times by floating passes down the sidelines. This flaw is difficult to explain; however, my guess would be that he simply tries to “place” the ball rather than fully stepping into his throw. This play against Florida State is one example:

Overall, I really liked Chad Kelly –“The Player”– and think that he has Day 1 talent. He demonstrated everything that is required to succeed in the professional game: Toughness, accuracy, athleticism, arm strength, etc. However, despite his obvious on-field ability (and arguably being the best QB in this draft), his off-field issues are of legitimate and significant concern. He has been dismissed from nearly every team that he has played for and he has had several reprehensible legal incidents. As a result, he will surely fall in the Draft, probably to Day 3, and will likely be subject to a zero-tolerance policy from the team that selects him. Having said all this, I don’t think I would be too upset if the Steelers drafted him late.  In my opinion, his NFL potential outweighs his off-field risks and I do believe that players can grow and mature with age (Ben Roethlisberger could be the perfect role model, given the mistakes he made early in his career). Moreover, a Day 3 selection is a relatively small investment that could yield significant benefits down the road.

Games Watched: vs Florida State, vs Auburn, vs Georgia, vs Memphis, at Alabama (2015)